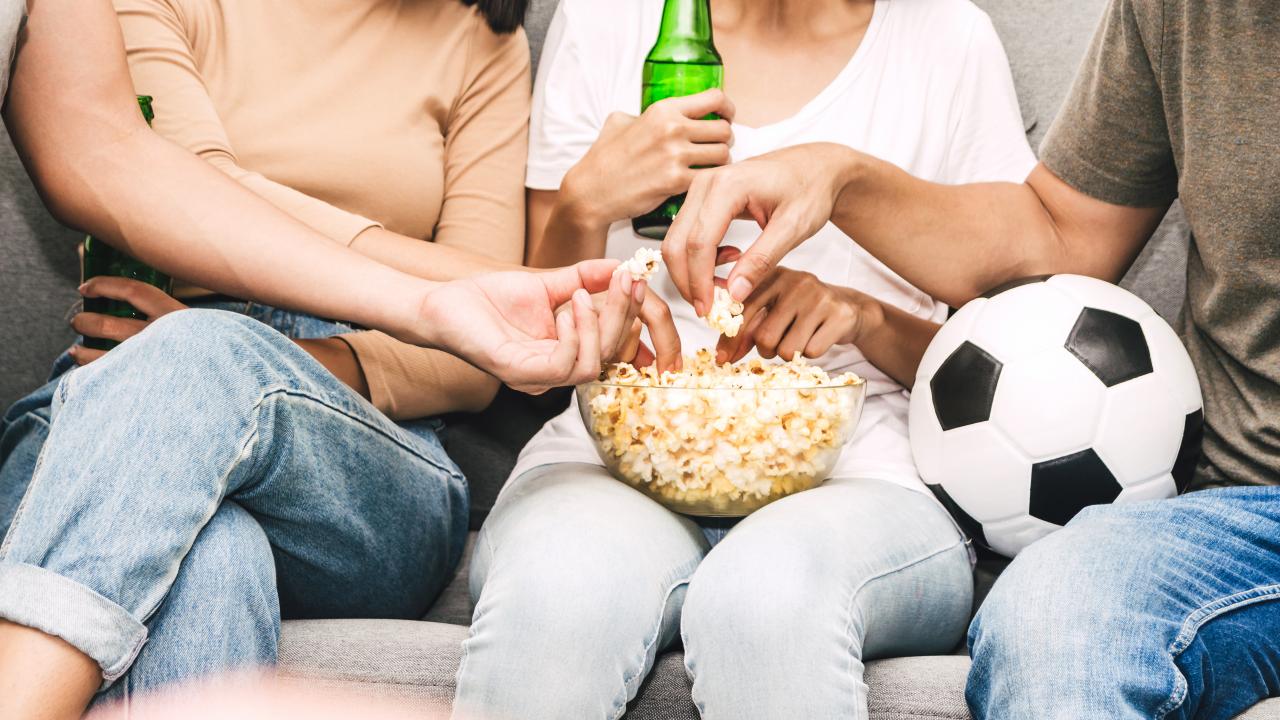 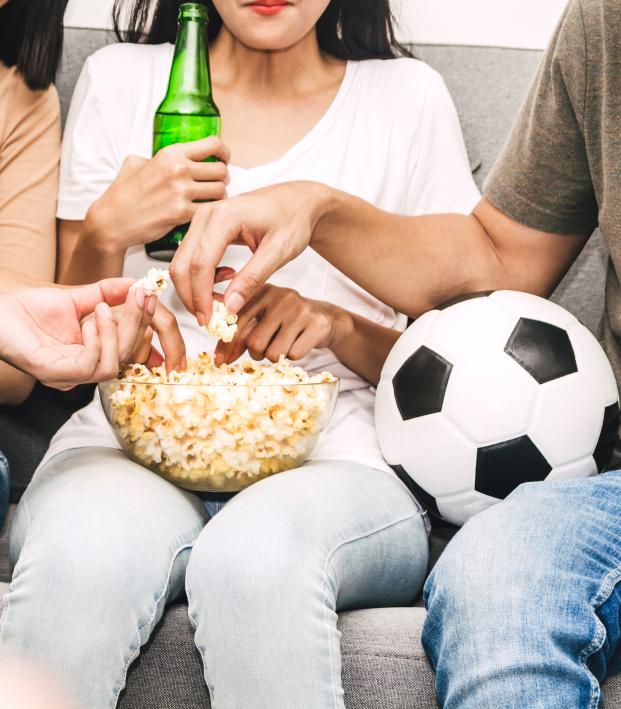 18 Best Football Movies You Can Stream On Netflix, Hulu And More

Before the cinematic world is soon flooded with Neymar-inspired flopping documentaries, we football lovers can still appreciate the filmmaking that’s made this game beautiful.

From tear-jerking dramas and educational documentaries to mindless comedies and inspirational masterpieces, cinema football has everything we need. Here are the top 18 best football movies on streaming services such as Netflix and Hulu, plus an extra collection for those who can’t get enough of the beautiful game.

Pelé: Birth of a Legend

Kevin de Paula stars as the football legend and planet Earth’s official hero in this biographical drama. The 2016 movie, directed by Jeff and Michael Zimbalist, highlights the Brazilian’s journey from an unknown youth to being the 1958 World Cup hero and winner.

PELE: THE BIRTH OF LEGEND movie, taught me a lot
taught me to Embrace who i am
taught me to never GiveUp
to turn anger into a positive emotion
that Great performances r result of great preparation
Age is just a no.
Stay to ur roots
AND
Stick to the choices u made no matter what pic.twitter.com/OYI4OewP5M

This one’s a special treat for those who dare to dream.

This Netflix Original series, which makes it exclusive to the streaming service, follows the Bianconeri during the 2017-2018 season. The docuseries is a great insight into the players’ private lives on and off the pitch.

Juve fans will puke rainbows after watching this one. Or maybe it comes out in black and white?

You don’t watch Zlatan, Zlatan watches you. Seriously, doesn’t this one speak for itself? The documentary is full of never-before-seen footage as it covers Zlatan’s rocky beginnings to his rise in 2005. You’ll get to see footage like this:

When things you say as a youngster can come back to haunt you:#BecomingZlatan #DenUngeZlatan  #Zlatan   #ManUtd pic.twitter.com/39UztVNaE9

Oh, Zlatan. If only I wasn’t afraid of you, I’d write something snarky.

This documentary created by Agency Yard examines the so-called "urban" aspect of football. In particular, football in the streets and ghettos of France, where many French players are made, are correlated to the French rap scene. Sometimes rags-to-riches isn’t luck, rather it is pure dedication and love for the sport from players like France’s Moussa Dembele.

This docuseries is a great start to understanding arguably the most competitive football league in the world. Closing up onto the lives of individual and remarkable players, the series offers both great insight to the league’s history and great one-on-one interviews with the likes of Thierry Henry and Ruud van Nistelrooy.

This one is an absolute treat for any self-proclaimed lover of football. The documentary covers FIFA as an organization that committed acts of corruption and as one that is dealing with a shady past.

This particular person on Twitter offered a very sophisticated and hard-hitting piece of criticism. I wonder how FIFA could ever respect itself after this.

If you’re ever in doubt about fifa corruption, remember this is who they let make the World Cup song  #WorldCupFinal pic.twitter.com/mFmNxwKisL

Any coaches out there in need of inspiration? This documentary follows three German professional coaches in a behind-the-scenes, nitty gritty side of football. No wonder most sports coaches have anger issues.

Inversely, a lot of Juventus fans were angry when Massimiliano Allegri was appointed coach. Not so angry now after a few shiny pieces of metal, are you?

On this day in 2014, Massimiliano Allegri was appointed new Juventus coach. Many Juventini were angry and sceptical, but nine trophies now won and more to come

For you Spanish-speaking folks (and if you have no problem reading subtitles), this provocative comedy will kill you. As in intense laughter, not actually end your life …

If you can stomach a plot that revolves around a team of monks who climb their way up the tournament to play on the Vatican’s pitch, then this one is definitely a good choice.

As for the real Holy Goalie, that title is best deserved by Germany’s Oliver Kahn. An absolute monster of a keeper.

Inspired by the American football (or hand-egg) movie "The Longest Yard," which was later remade by Adam Sandler, Vinnie Jones takes us all for a wild ride in this footie classic. Jones, the former midfielder for Chelsea and Sheffield, to name a few, leads a team of inmates in a match for honor against the guards.

Plus Jason Statham plays the psychotic goalie and you don’t want to miss that maniacal performance. Someone even turned Statham into a meme because it’s the internet and people are innately uncivilized creatures.

Who did it better? Hugo Lloris or Jason Statham in Mean Machine? #WorldCupFinal #WorldCup  #FRACRO   pic.twitter.com/VFRwLhH8Cd

It’s not what you think. There aren’t any bears or Siberian tigers kicking around a ball with Ivan Drago. This one’s a National Geographic special about football of course, but in all the extreme-weather areas of Russia. Check it out before it’s too late.

A British mailman's life is in shambles after a series of unfortunate events; his wife leaves him, his sons don’t like him and his job is unfulfilling. After a car accident and being hospitalized, the mailman indulges with some sticky-icky marijuana and hallucinates the vision of his favorite Manchester United player: Eric Cantona. As for Cantona fixing this dude’s life up, you’re just going to have to see it yourself.

Other Best Football Movies Not On Hulu/Netflix

Michael Caine, Sylvester Stallone and Pele. Do you truly need more information? Fine. A head of a Nazi prisoner of war camp who is also a football enthusiast organizes a game between the Nazis and the Allied captives. The Nazi captain thinks he’s doing this to bolster Nazi Germany’s image to the world when in fact Stallone, Caine and Pele are planning a massive escape.

If you have ever uttered the words “I love movies,” and haven’t seen this one, you should be deeply ashamed of yourself. You can rent this one on Google Play, PlayStation, YouTube, Apple's iTunes and Vudu.

Silly Caine, go back to being Bruce Wayne’s butler.

Croatia’s black strip and red socks v England in all white has got all sorts of Escape to Victory about it. #CROENG pic.twitter.com/nxTJljPLU6

Elijah Wood, better known by his true name, Frodo, is the odd American in England who has no idea what football culture or hooliganism is all about. Wood, with the help of Charlie Hunnam’s character, learns how to become a tougher person in the face of adversity all thanks to football’s darker side.

Really, not for those who don’t like violence in movies. Here’s a little glimpse:

Unfortunately, the 2005 flick has no streaming options currently.

You’ve at least seen one episode of this trilogy, at least one! It's the tale of Santiago Muñez, a Mexican cook in Los Angeles who rises slowly but surely through the ranks of football. His journey is essential to each and every football fan, plus David Beckham and Zinedine Zidane are just a few names you get to see in the trilogy.

You can rent the films on Google Play, YouTube and iTunes.

A tragic yet uplifting tale, United tells the story of the Busby Babes, who are the youngest side to ever win England's top division. In 1958, eight of them died in the Munich plane accident, which shocked the country and the football community all together. Several of the survivors later on played in England’s World Cup-winning team in 1966.

There was the Busby Babes, the class of ’92 and then these bad boys:

United is available for rental on iTunes, Google Play, Vudu, PlayStation and YouTube.

Your mother should spank you if this one went unseen on your radar, seriously. This Chinese comedy mixing Kung Fu and football revolves around a motley crew of loser outcasts who only realize how special they are once their forces combine. Stephen Chow directed and starred in this comedic masterpiece that might just make you sully your pants from laughter.

This one’s a trifecta for movie buffs who love martial arts, football and a demented sense of humor.

This one can be streamed on tubiTV or rented on a number of platforms, including Google Play, PlayStation, YouTube, Microsoft Movies, Amazon, iTunes and Vudu.

We have to level the playing field with this sad yet uplifting drama starring Sean Bean, better known as Boromir, or the guy who dies in every movie. Bean is Jimmy, an alcoholic who ironically works in a brewery and aspires to be a professional footballer but just can’t face his demons alone. Enter Annie, played by Emily Lloyd, who claims both Jimmy’s heart and his self-deprecating lifestyle. Jimmy gets the chance of a lifetime when Sheffield United comes knocking on his door. The problem is: Can Jimmy control his drinking habit?

Ned Stark and English football? Now that is a dark drama.

The film is currently unavailable on any streaming services.

Once in a Lifetime: The Extraordinary Story of the New York Cosmos

This documentary highlights the phenomena of the North American Soccer League, NASL, and its franchise the New York Cosmos during the 1970s. There are conflicting stories in the tale of American soccer as to how it emerged and how excessive business strategies eventually hurt the sport. Most importantly, the documentary sheds light on U.S. football’s history, which is more complicated than you’d think. You’ll definitely impress your friends with all the factoids after watching this one.

The film can be streamed on tubiTV or rented on Google Play, YouTube, iTunes and Vudu.