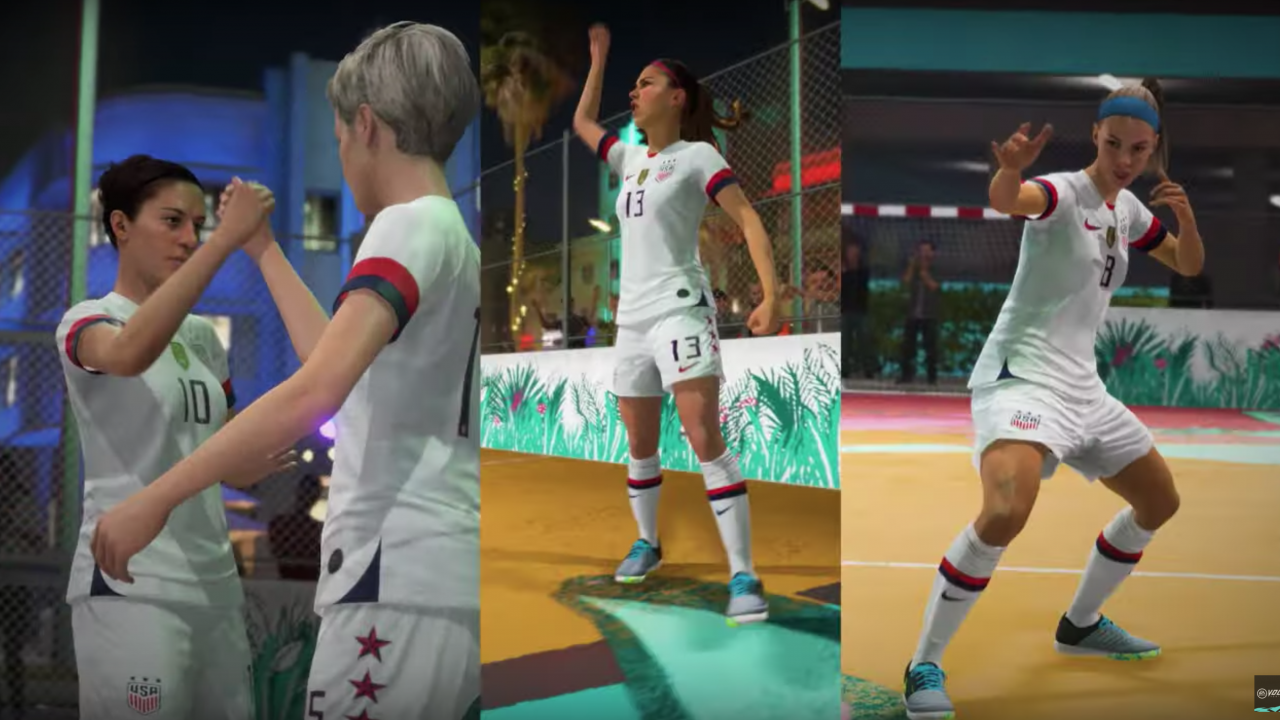 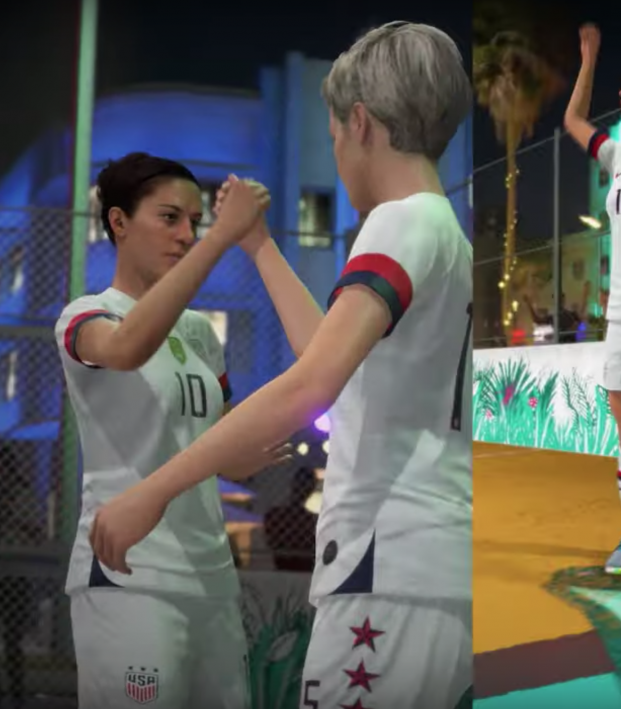 In terms of gameplay, FIFA 20 might just be the best edition of the game in years. In addition to some long-awaited updates to Career Mode, EA Sports is adding VOLTA Football, a FIFA Street-esque portion of the game.

But that just got us thinking: What other game modes could FIFA add? The game already lets you do just about anything you could think of in the realm of football: seasons online and off, Career Mode, House Rules and the super-popular FIFA Ultimate Team. So we figured we’d look outside the realm of football.

Here are 10 FIFA modes we want to see in the coming years.

It seems like just about every video game released these days comes with a new Battle Royale mode. Success of games like PUBG, Fortnite and Apex Legends has forced creators to consider adding the super-popular mode to their games.

Shooting people in soccer isn’t really realistic. What FIFA could do is take the other components of the most successful Battle Royale games and throw them into its new VOLTA mode.

Teams (or single players controlling an entire team) load up a game and are immediately placed into a 64-team tournament. Each squad is randomly assigned a spot in a single-elimination bracket. Matches last two minutes each and ties are immediately broken by whoever pulled off more dribbles.

During matches, pick-ups are dropped that both teams can go for in the middle of the action. These could include things like boots that give you better speed, socks that give you increased endurance, shirts that give you more strength or headgear that improves your accuracy, or maybe an item gives you a one-time super shot. These drops carry over from match to match and the drop-rate increases as you progress through the tournament and the more skill moves you pull off.

Eventually, you reach the final and a champion is crowned. After six matches, each lasting two minutes, that’s just 12 minutes of game time, or about as long as a normal online match, albeit with a little more added in between games.

Also, there are loot boxes. In fact, all of these FIFA modes have loot boxes because it’s not really a game these days without ’em.

Detective/point-and-click adventure games comprise a surprisingly popular genre, so why not combine that with soccer’s most popular new technology: VAR.

In the FIFA: VAR Detective game mode, players take the role of a video assistant referee tasked with making minute decisions that will undoubtedly change the outcome of a match.

Gather evidence by pointing around various screens. Talk to the referee to make the fans and players wait as long as possible. Use your video replay tools to check all the angles to determine the correct call. But this is like real life and you only get TV camera angles — there’s no going into the game engine to create impossible angles to actually make the right decision, because where’s the fun in that?

EA Sports has put most major stadiums in the world into its FIFA series, but not all. Why not let fans create their own stadiums with a Minecraft spinoff?

In FIFAcraft, you’ll gather materials, exploring vast worlds while fighting off hordes of Per Mertesacker zombies and Radja Nainggolan creepers. Once you’ve got enough supplies, you’ll head back to North London to rebuild Tottenham Hotspur Stadium and actually give it a damn proper name like AIA Arena.

And, of course, you can purchase loot boxes that will give you a random amount of material you don’t actually need to speed up the process.

Card collecting games (CCGs) are hugely popular around the world and it’s part of the reason FIFA Ultimate Team makes EA so much money. But what if instead of collecting cards to use in a game of soccer you collected cards to use in a card game — something more along the lines of Hearthstone or Magic: The Gathering.

Like Magic: The Gathering’s land system, the FIFA CCG could have players play team/league/country cards in order to summon players to the field. Team cards count as double for that particular team.

Want to start off with Lukasz Fabiański card for defense? You’ll need two land cards from either the Premier League or Poland — or one team card from West Ham. The better the player, the more land required: A rare Virgil van Dijk, because he’s a 90+ player, will require a combination of four lands from the Netherlands, Premier League or Liverpool. Freddy Adu is free to play at any time without any land.

Once your players are on the field, they can be used to either block other attackers or go for goal. The first to 20 goals wins. Players will have various abilities that counter others and you have the opportunity to create a variety of different combinations among players from the same country but different team or vice versa. Add in some instant cards like VAR reversal or manager cards and you can add a lot of depth to the game.

A real-time strategy version of FIFA (think Command & Conquer, StarCraft) would be an absolute waste of time. Imagine drawing a big circle on the pitch to select the team and then clicking on the goal and waiting to see how the AI works it out? No thanks.

But what about a grand 4X strategy game in the vein of the Civilization series?

In this mode, you can take control of a team from the very beginning of time (1863, when football’s rules were first laid out) and build it through the ages.

You can choose many paths to glory. You can try to build up science and create the healthiest, most-fit players. You can go for culture and create a fortress of a home stadium with the best fans in the world. Maybe you want an economic victory and you just buy all the best players like PSG. And, of course, there’s the domination victory, where Gandhi destroys the other clubs with nukes.

Just like in Civ, matches are decided instantly by a random number generator, so it’s almost like watching MLS.

Animal Crossing — all of its editions — just might be the most adorable game out there. A sort of social simulator, the game asks players to do various tasks for anthropomorphic animals.

In FIFA Crossing, you do various tasks for player agents to try to gain favor so that you can perhaps sign their players.

Mino Raiola wants you to gather six acorns before you can talk to Paul Pogba. Jorge Mendes will only let you converse with Cristiano Ronaldo if you fish up six carp.

Also, every transaction is overseen by Tom Nook, and Tom Nook can go fuck himself.

There is no more important moment in a soccer match than when one team scores and players from both teams fight over possession of the ball inside the goal. But for some reason FIFA leaves this aspect of the game out.

For reasons that range from machismo to time wasting to a tenuous grasp on the rules of the game, footballers love to fight over the ball after goals are scored during tight matches, despite the fact it has no bearing on who gets the ball next.

So this has to be the setting for a new FIFA mode: FIFA Kombat.

Really, this FIFA mode is just Double Dragons with upgraded graphics. No one has actually had fun playing that game in 20 years, which is perfect for these inane brawls that accomplish nothing.

This would work great as a minigame in matches, with the winner having absolutely no bearing on who gets the ball next.

The most important aspect of a footballer’s life that’s not actually in FIFA right now is dating. Sure, you can play dozens of different drills to prepare for a match, but it only really matters if you use the skills learned in those drills to bag yourself a hottie.

This new FIFA mode would basically just turn the Journey, a useless mode as it is, into a dating simulation. Do you want to go out to the club the night before a match to find your one true love? Or do you stay at home and flip through Tinder and/or Grindr to find that special someone? Do you have a different partner in each city, or do you date a teammate? The choices are endless.

And, again, loot boxes. I can’t stress that enough.

FIFA already has some role-playing elements sprinkled throughout its game — in the Journey and Career Mode you improve player skills, for example. But a true role-playing game also involves stupid quests to advance your character. So in the Final FIFAsy, if you think you’re going to sign big-name player, you better be prepared to jump through a dozen hoops.

Say you want to sign Neymar: First you must go out and find a magic lantern to impress his sister. No, sorry, you brought back a magic lamp, please try again. Yes, that’s the one. Now his mother needs to know he’ll be loved, so she requires the kisses of eight virgins to be bottled and thrown into the sea. Finally, Neymar Sr. says you gotta go out and squash 10 rats and bring back their tails. Now, and only now, do you get the ability to make an offer for Neymar that the club will undoubtedly reject anyway. But hey, you got a tiny bit of experience, so congratulations!

What if you played soccer with jet-fueled vehicles?