Ten players whose market value has skyrocketed during the World Cup 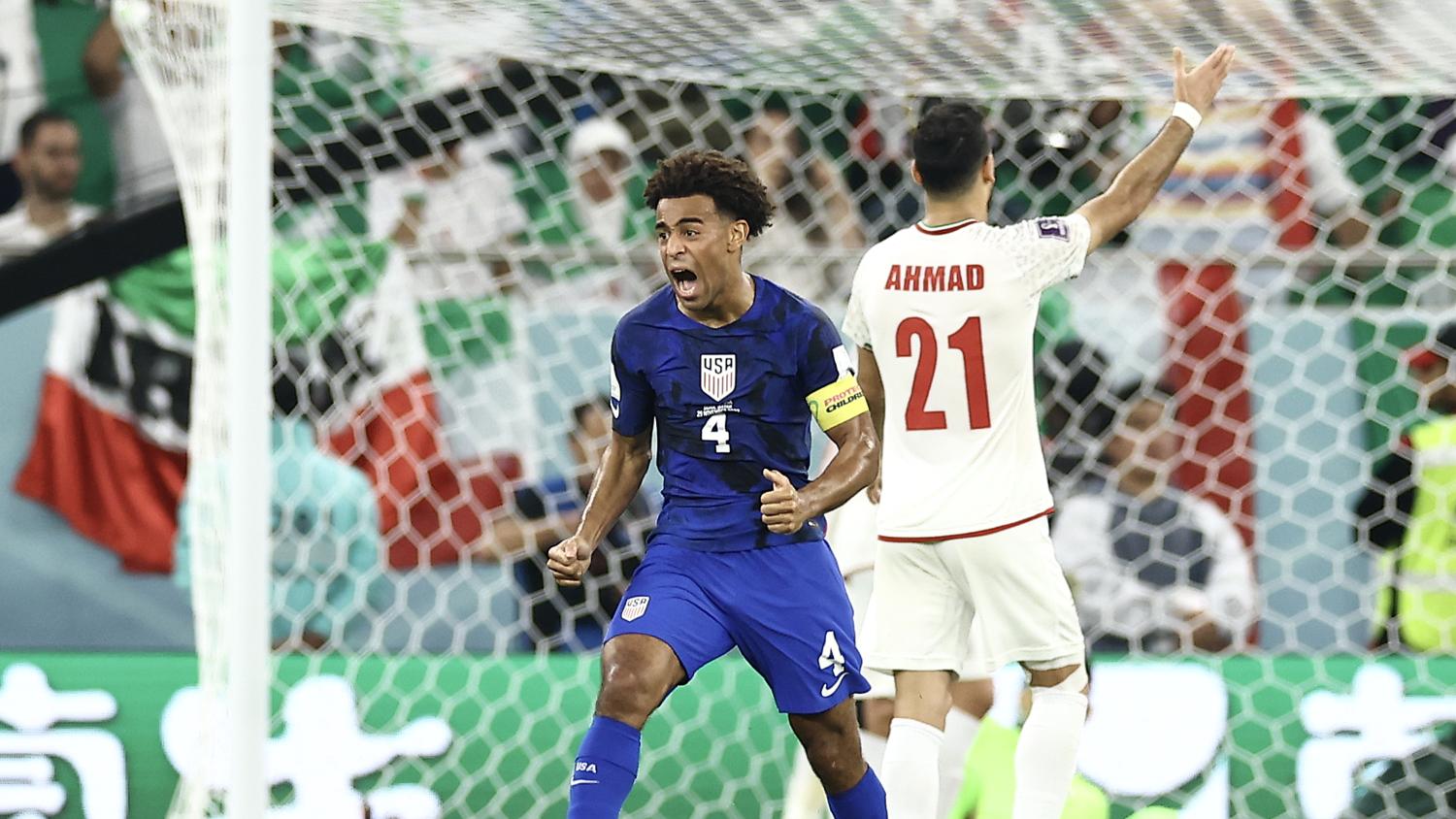 These players are in for massive market value increases after the World Cup.
Getty Images

One of the most exciting aspects of every World Cup is seeing new young players step up and make their mark on the biggest stage. This year’s edition has been thoroughly unpredictable and as a result, there has been no shortage of new players becoming household names.

January’s transfer window could be filled with stars from this tournament moving to bigger clubs. Now that the group stage is done, let’s take a look at ten players whose market value has skyrocketed during the World Cup.

That’s the second most ever recorded in a World Cup game.

Germany’s trip to Qatar was unquestionably one to forget. Elimination in the group stage for the second successive campaign was a shock from the four-time world champions, but there were several bright spots for Hansi Flick’s side, namely 19-year-old Jamal Musiala.

The Bayern midfielder has been nothing short of spectacular for Germany arguably becoming their most important player during the tournament. His one assist does not do his performances justice, but fortunately, more advanced metrics help paint a clearer picture of what Musiala is capable of.

Among all players at the tournament, the young German is third in non-penalty expected goals plus expected assists with a staggering 2.8 per 90. And again, he’s only 19.

His market value at the beginning of November was already €100 million, but with his immediate creative output combined with his immense youth, that price may still be a bargain.

Mohammed Kudus completed more take-ons than any other player in Group H at the 2022 World Cup and no one scored more goals.

The Starboy will be back. @midnite | #FIFAWorldCup pic.twitter.com/gdbgk6QK2t

This year’s World Cup saw a host of great performances from African sides, and Ghana’s first two matches were among the best of the entire tournament. While they were eliminated following a timid defeat to Uruguay, Mohammed Kudus will remain one of the shining stars of their campaign.

The 22-year-old plays for Ajax and as of November has a market value of only €15 million, which will no doubt rise after his spectacular trip to Qatar. Two goals and an assist put Kudus in the top 20 among all players at the World Cup for goals and assists per 90. Ajax is famous for selling off its youth for high profits and Kudus has every chance of continuing that tradition.

Header vs. Senegal ✅
Left foot vs. Ecuador ✅
Right foot vs. Qatar ✅
Cody Gakpo can score them all pic.twitter.com/mHTQ6tGyrh

By far the easiest to include on this list, Gakpo’s rise has been meteoric.

His three goals have been a godsend for the Dutch who have struggled to turn attacks into concrete chances. Currently the joint top scorer at the World Cup level with four other players, Gakpo is the youngest at just 23 years old and has scored his three goals from just four total shots and 0.3 expected goals.

Is that goal-scoring rate sustainable long-term? Absolutely not, but it is, without a doubt, one of the most impressive individual World Cup group stage performances in recent memory.

His €45 million market value is almost guaranteed to rise after the tournament and if he continues his form, he could be tempted with a move away from his boyhood club PSV in the January transfer window.

Another Dutchman and another Ajax player make our list in the form of Jurrien Timber. The defender is only 21 years old and has started two of his side’s group-stage matches ahead of another young sensation Matthijs de Ligt.

That’s impressive enough, but his performances this tournament have spoken for themselves.

His 11 tackles and interceptions is joint 18th-best among all players at the World Cup and he has yet to be dribbled past in either match he’s played. He’s also completed 92.5% of his 173 pass attempts. Timber’s €45 million market value has already risen tremendously in the past two seasons but it will no doubt only increase as the Netherlands continues to perform.

1.5 - Andries Noppert prevented 1.5 goals for #NED this #FIFAWorldCup, only Wojciech Szczesny has done better for his nation this tournament (3.1). Tower. pic.twitter.com/sxkYJKseDE

A third and final Dutchman and our lone keeper on this list, Noppert came into this World Cup with a relatively high degree of unfamiliarity, as he had never appeared for the Netherlands before the tournament.

At 28 years old, the Heerenveen shot-stopper is comfortably the oldest player on this list and has one of the lowest market values at just €2 million. However, goalkeepers tend to have longer careers than field players, meaning Noppert could still theoretically play for another decade if not longer.

His three starts in Group A have been eye-opening, and his +1.8 post-shot expected goals minus goals allowed is third among all keepers only behind Poland’s Wojciech Szczęsny and Belgium’s Thibaut Courtois. Not exactly bad company to be in at a World Cup.

While most of the spotlight has been on Son Heung-min for South Korea’s World Cup campaign, it's actually been Cho Gue-sung who has stolen the show. His looks have been the subject of much attention but a two-goal performance against Ghana showed how lethal he could be in front of goal.

He currently plays for Jeonbuk Hyundai and has a market value of €1.4 million, but has already been linked with several European clubs including Celtic, Fenerbahçe, and even Borussia Dortmund. If these indications are correct and he's to make the trip away from the K league, there's a good chance it’ll be for more than €1.4 million.

70% of the world is covered by water, the rest by Tyler Adams pic.twitter.com/gObIgqRSle

What is there to be said about Tyler Adams that hasn’t already been said?

The New York native has impressed since his move to Leeds United this summer and was named captain of the United States for this year’s World Cup. His leadership is second to none and he's mature well beyond his years, as evidenced by his answering difficult press conference questions better than most politicians.

On the pitch, Adams is simply remarkable. A true workhorse who can run all day, every day seemingly without effort. His defensive work is what has allowed the United States to go forward so effectively, knowing that the 23-year-old has them covered.

The Leeds midfielder is second among all players at the World Cup for tackles in which the tackler’s team won the ball with nine.

At this point, it's a joke that the former New York Red Bulls player’s market value is only €17 million. There are few teams in the world that would not be improved with the addition of Adams. A transfer anywhere near that amount would be highway robbery.

Enzo Fernandez is the youngest player to score for Argentina at a World Cup since Lionel Messi in 2006 pic.twitter.com/xS7N4oXSvE

21-year-old Fernández has taken his opportunities playing for La Albiceleste, scoring once and assisting another. With limited minutes, his attacking output is good enough for 13th at the World Cup for goals and assists per 90.

After joining Benfica for €12 million this summer, his market value nearly tripled to €35 million at the beginning of November. His wondergoal against Mexico on matchday two was the perfect way to close out a tight match while also announcing himself to the world.

We doubt he’ll leave Benfica in January, but next summer a bigger club may punch their ticket and sign him before his value gets any higher.

Another look at that beauty from Abdelhamid Sabiri pic.twitter.com/CtE3z0WYL2

Morocco has stunned the world by beating Belgium and Canada and winning their group ahead of Croatia at this year’s tournament. Several players have impressed in Walid Regragui’s side such as Zakaria Aboukhlal, Noussair Mazraoui and Youssuf El-Nasyri, but it’s been Sabiri whose performances are most deserving of a market value increase.

The Sampdoria midfielder is 12th at the World Cup for non-penalty expected goals plus assisted goals per 90, just behind Jamal Musiala. At 26 years old, Sabiri is by no means young, but his measly €3 million market value needs to be increased.

Morocco will face Spain in the Round of 16, where a spectacular midfield of Pedri, Gavi and Sergio Busquets will likely be their undoing, but if this tournament has taught us anything, predictions mean nothing.

By far the biggest surprise of the World Cup so far, Japan topped Group E with a 2-1 comeback win over both Germany and Spain, and it was Ritsu Doan who scored the equalizer in both games. The Freiburg striker has the fifth-highest goals per 90 at the tournament with 1.37 and has made a name for himself for being quite the super sub.

His goal from distance against Spain could perhaps have been dealt with better by keeper Unai Simón, but regardless was the jolt the Samurai Blue needed as they scored a winner just minutes later. Doan is only 24 years old with a market value of €12 million that could and probably should rise after his fantastic performances for Japan.