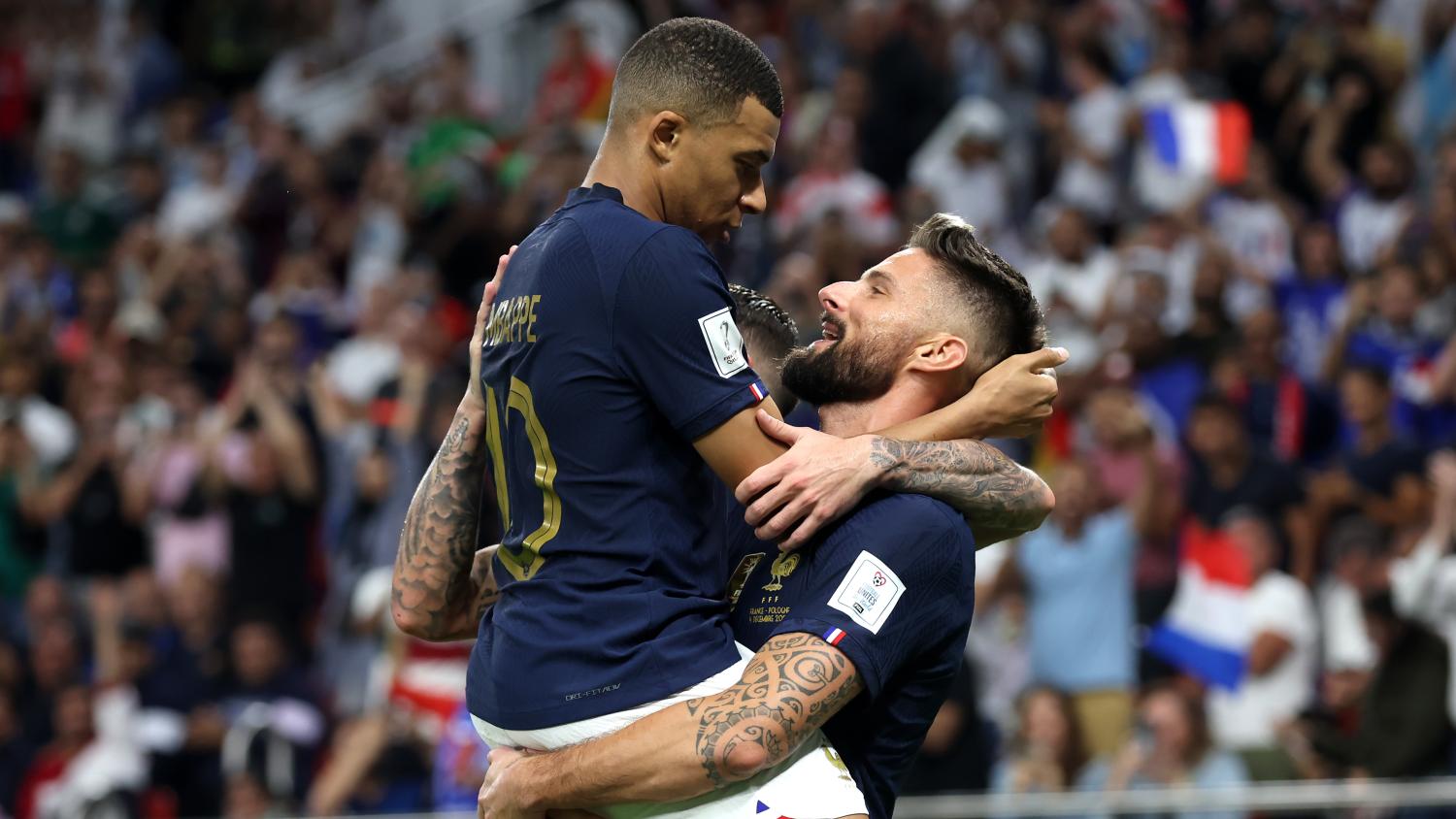 Mbappé and Giroud are a match made in heaven.
Getty Images

DOHA - Thirteen years separate France strikers Kylian Mbappé and Olivier Giroud but their devastating double act in the 3-1 last-16 defeat of Poland at the World Cup on Sunday showed the age gap is no barrier to a flourishing relationship.

Giroud, at 36, brings experience and guile to France's attack, while Mbappé, 23, is blessed with pace so explosive that the screens at the Al Thumama Stadium showed him hitting a top of speed of 22 mph as he tormented Poland's defense.

It was not supposed to be this way in Qatar. Giroud looked set for a secondary role for France until the team's number one center forward Karim Benzema pulled out with an injury on the eve of the tournament. Mbappé and Benzema have forged a promising partnership for France in the past but the young Paris St Germain striker has said previously that Giroud's approach to attack probably suited him better.

That understanding was clear for all to see as Poland were cut apart by France's strikers.

A defense-splitting pass by Mbappé set up Giroud to break the deadlock — and become France's all-time top goalscorer — in the 44th minute of the mismatch, with Poland chasing shadows for most of it. The goal also made Giroud — at 36 years and 65 days old — the oldest scorer in a World Cup knockout match since Roger Milla against Colombia in 1990 in a last-16 game.

"Giroud is an incredible player, there are many who say it now," French coach Didier Deschamps told reporters. "He was much criticized but Olivier has the mindset to fight. When he is not decisive, he is so useful to the team but like any center forward, he prefers the collective victory, but winning with this goal-scoring record, it's not nothing."

Giroud, who plays for AC Milan after making his name in England with Arsenal and Chelsea, returned the favor when it was Mbappé's turn to get on the scoresheet. He launched a 74th-minute counter-attack that ended with the France number 10 using all his power to hammer a shot past Wojciech Szczęsny in Poland's goal.

It was only a matter of time

Mbappé makes it 2-0 for France pic.twitter.com/1vA2MFjR82

With Giroud substituted to give his aging legs a rest, Mbappé went on to claim his second goal, curling a shot into the top corner in added time before Robert Lewandowski claimed a penalty consolation goal for Poland. The brace meant Mbappé became the youngest player to reach five knockout stage goals at a World Cup since Brazil great Pelé in 1958, when he was 17, according to data firm Opta.

He scores his FIFTH goal of the 2022 FIFA World Cup pic.twitter.com/ZevekmF47V

While France's defense showed it was far from impregnable at times in the Poland match, their quarterfinal opponents — England or Senegal who play later on Sunday — will not have missed how Ousmane Dembélé, Antoine Griezmann and substitute Marcus Thuram also dazzled for Les Bleus.

The way France piled forward in numbers from the start of Sunday's match drew a sharp contrast with Poland's approach as Lewandowski, one of the world's most prolific strikers, was left to play a lone striker role for much of the evening. He had publicly called on Poland coach Czesław Michniewicz last year to give him a strike partner and a better chance of finding the net, which he did so often in the Bundesliga for Borussia Dortmund and Bayern Munich before moving to Barcelona.

His frustration was palpable once again after France's scintillating attacking display when the 34-year-old was asked by Polish media if he planned to play in the next World Cup.

"It's still a long way to go and, obviously, you need to enjoy the game," he said. "If we attack, try to attack, it's a bit different. But if we play defensively, there's no joy."