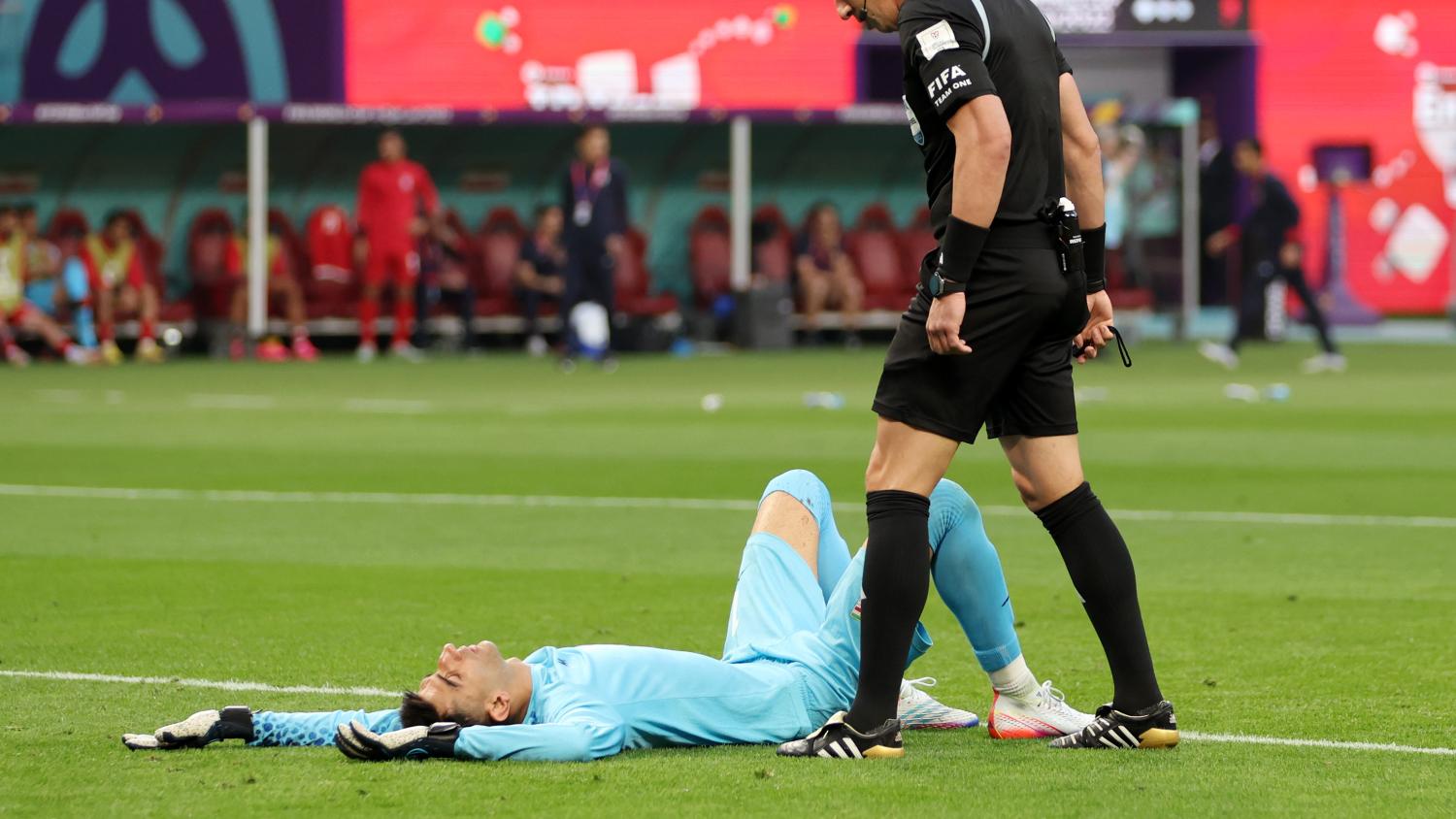 Not a great look.
Getty Images

FIFA’s concussion protocol is still Medieval and that was on full display during the first half of England’s opener vs. Iran on Monday. Iran’s goalkeeper, Alireza Beiranvand, had a nasty clash of heads with teammate Majid Hosseini in the eighth minute.

Here was the incident that took place.

You don’t have to be a doctor to know that a player shouldn’t be able to continue playing after a blow to the head that hard.

Beiranvand and Hosseini both went down clutching their faces and the goalkeeper would stay down for an extended period.

Iran’s goalkeeper had blood coming from his nose and received treatment for nearly 10 minutes (there was 14 minutes of stoppage time in the first half).

To the shock of FOX’s commentators, Ian Darke and Landon Donovan, Beiranvand wasn’t substituted and was allowed to stay on the field. Beiranvand didn’t look well and made the smart decision to go down and ask to be substituted off.

Iran goalkeeper Alireza Beiranvand gets some love from his teammates before being taken off the field ❤️ pic.twitter.com/p8bFSME7o8

There was only maybe a minute or two between Beiranvand resuming play and going down to be substituted. In no scenario should it be up to the player to decide if he can continue playing or not.

FIFA’s concussion rules for the World Cup state that any player suspected to have suffered a concussion is expressly prohibited from returning to the game. Yeah… didn’t quite follow that rule now did we?

One of the biggest flaws is that the doctors that check for head injuries are from the team of the injured player. Neutral doctors who have no interest in the game's outcome need to be making the call on if a player can go on.

FIFA does now allow a concussion substitute, so in this case Beiranvand didn’t count as one of the five substitutes nor one of the three windows for subs. Critics argue that temporary substitutes should be allowed.

Soccer is one of the only professional sports in the world that has permanent substitutions where a player can’t come back into a game. All this does is encourage teams to keep a clearly concussed player in a game like what we saw with Beiranvand.

Absolutely crazy that football still allows players to stay on after a clash of heads like that. Temporary concussion substitutes need to be mandatory: get him off, assess him properly, bring him back if he’s fine. A player is always going to say they’re fine to continue.

2nd match of World Cup, further proof concussion protocols are not up to task. Alireza Beiranvand should have been immediately taken to dressing room and properly assessed. That’s why we have been pushing for temporary concussion substitutes with IFAB for years!

It’s been over eight years since Germany’s Cristoph Kramer stumbled and wobbled about in the 2014 World Cup Final after suffering a concussion. Kramer later admitted he remembers almost nothing. Eight years later and FIFA has made little progress in protecting players.