Canada Given Harsh Lesson In Concacafy-ness After Controversial Red Card 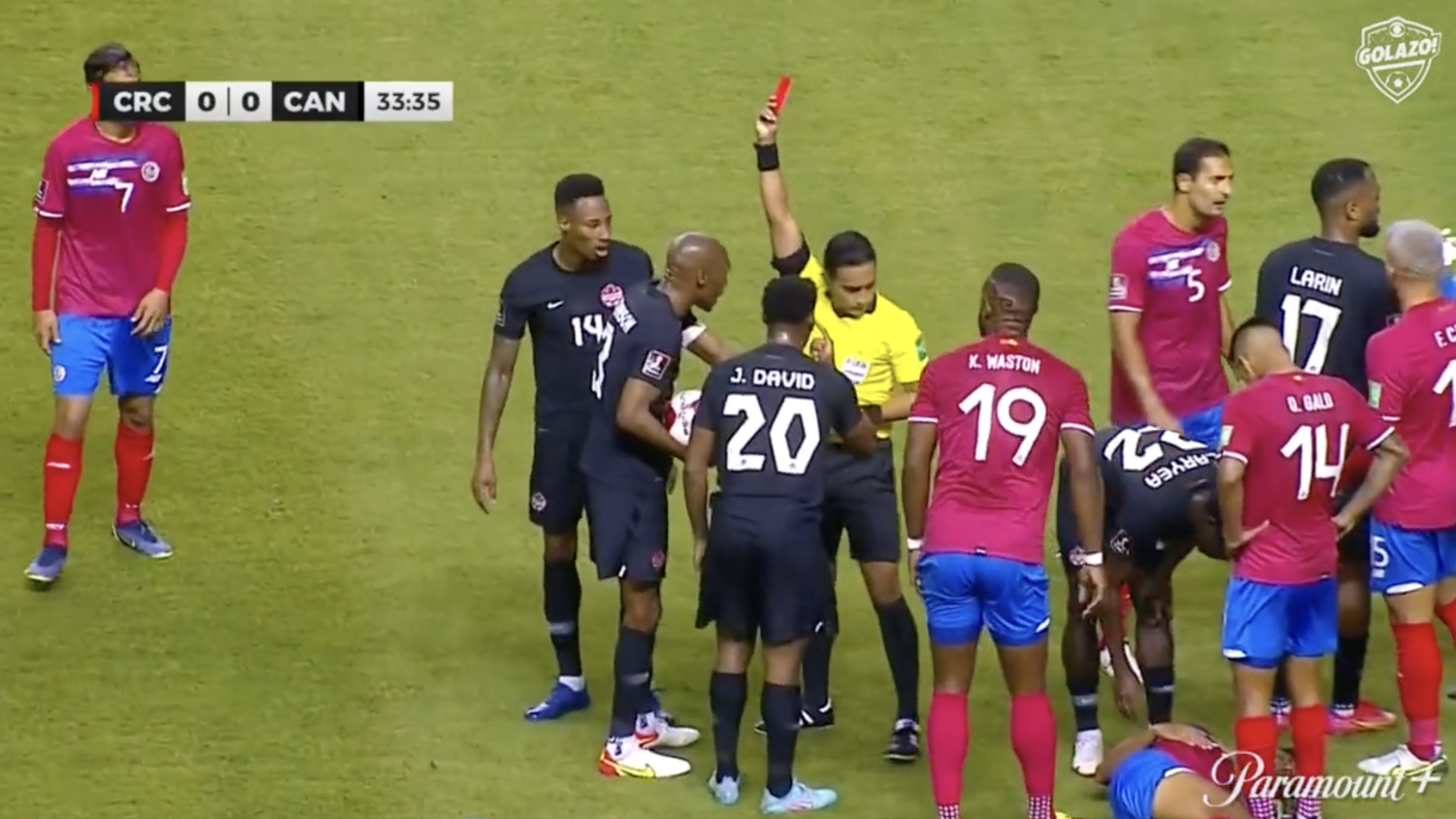 After a bizarre red card, Canada missed a chance to qualify outright for the World Cup and help the USMNT in the process.
@CBSSportsGolazo | Twitter

Canada could have clinched an outright berth in the World Cup for the first time since 1986 with a draw or win against Costa Rica on Thursday (and in the process helped give the USMNT a little breathing room in its quest to return to soccer’s showcase event). Instead, the Canucks got a little lesson in Concacafy-ness, with a controversial Mark-Anthony Kaye red card vs. Costa Rica resulting in a 1-0 defeat to Los Ticos on Thursday.

Canada went into the final three Concacaf World Cup qualifiers with a nice eight-point lead over fourth-place Panama, almost assured of a top-three finish and automatic berth to Qatar 2022. Before traveling to Costa Rica, coach John Herdman said the Canucks weren’t taking anything for granted.

But Canada learned just how hard it is to qualify for the World Cup through Concacaf, because sometimes, shit just happens.

Just as the USMNT found out four years ago, you can’t take your eyes off the prize until that ticket is officially punched. For the Americans, it was a wild sequence of events that resulted in them staying home from Russia. While Canada still has a high likelihood of qualifying, the job isn’t quite done after failing to get a point on Thursday.

Canada started the match in San José well, controlling the early action. It all changed in the 35th minute when Johan Venegas became the most hated man in Canada.

The Costa Rican winger walked into Mark-Anthony Kaye, who already had one yellow card, and fell down. Kaye didn’t back down from the collision, but he didn’t exactly initiate contact. Nonetheless, the referee, who may or may not have seen the contact, deemed the incident worthy of a second yellow card.

Canada go down to 10 men 34 minutes in after Mark-Anthony Kaye picked up a second yellow. pic.twitter.com/4tUMK58SYM

You could argue Kaye shouldn’t have allowed Venegas to barge into him. Or you could have a little common sense and just not buy into the clever ploy from Venegas. Because it was a yellow card and not a straight red, the VAR couldn’t intervene.

Though Canada played well down to 10 men and held most of the possession, Celso Borges scored the winner in first-half stoppage time.

Canada had multiple good looks at Keylor Navas’ goal throughout the match, striking the post in the 73rd minute, but couldn’t beat the PSG keeper. Despite racking up an unreal 68 percent possession with 10 men and taking 18 shots, Navas needed just three saves to record the clean sheet. (Canada struck the post again late in the match, but it appeared to have come off the arm of Jonathan David and would not have counted.)

Canada still just needs one more point from its final two games to ensure its place among the 32 teams at this year’s World Cup, and it would still be a huge surprise if they failed to qualify even without that point. But you can never take anything for granted in Concacaf.

Costa Rica won’t mind, moving ahead of Panama and into fourth place with the win while staying alive in its hunt for an automatic bid. The fourth-place team from Concacaf will play the top team from Oceania in a one-match playoff for the final World Cup berth in June.

The U.S., meanwhile, will have preferred Canada to keep Costa Rica from winning, which would have given the Americans a bit more leeway after their 0-0 draw with Mexico on Thursday. Still, the U.S. just needs one more win to at least finish fourth.