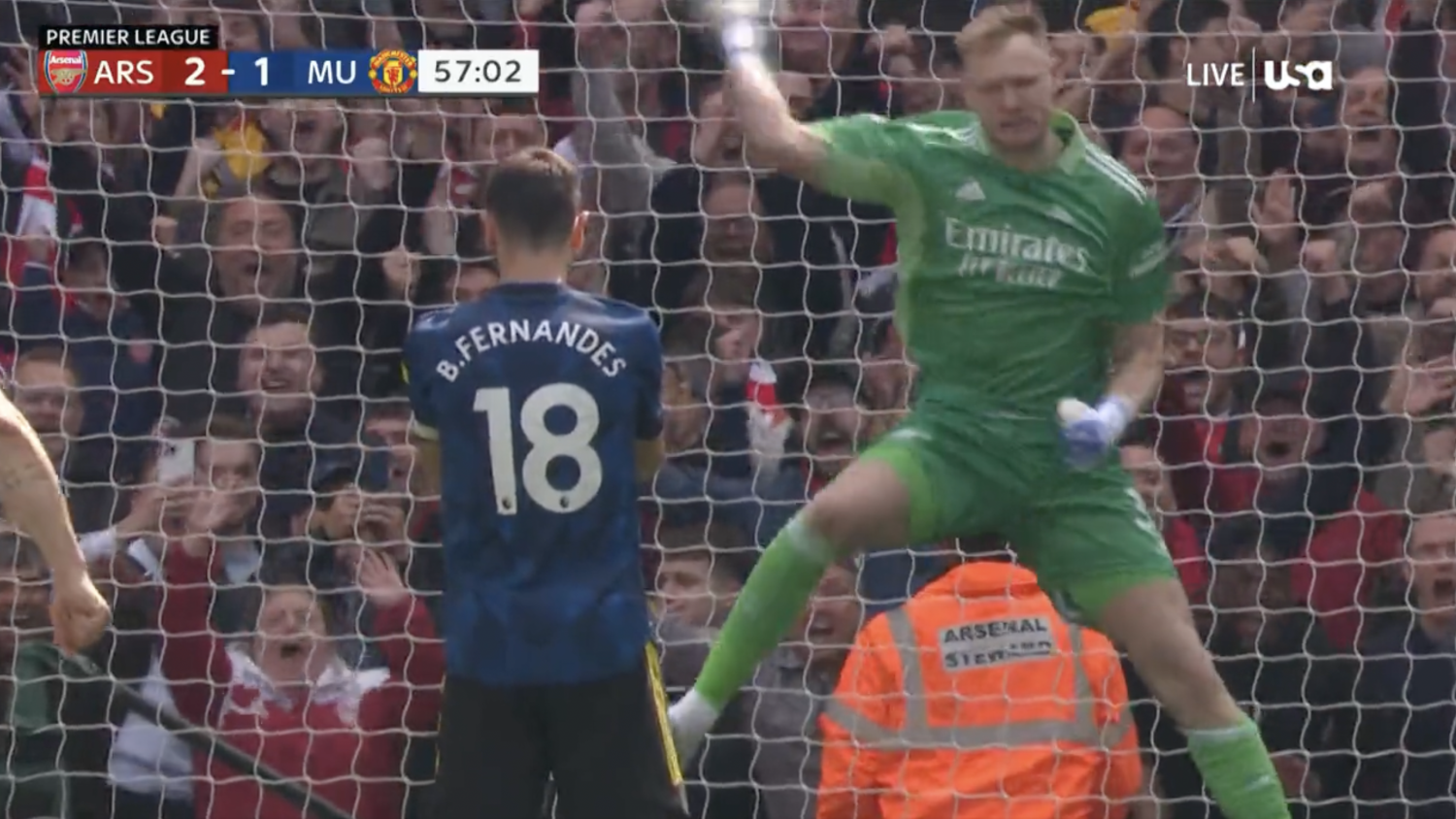 Cristiano Ronaldo’s 100th Premier League goal was overshadowed by a chance he didn’t get.
@NBCSportsSoccer | Twitter

Goalkeepers are weird. Not bad, per se, just peculiar. It takes a different type of person to play keeper, that oddball who dons oversized gloves and uses their hands. Sometimes the antics of goalkeepers are lauded for throwing opponents off, others they’re laughed at for being too bizarre. Arsenal’s Aaron Ramsdale strayed into the bizarre when he taunted the Bruno Fernandes penalty miss in a 3-1 win over Manchester United on Saturday.

After an impressive start saw Arsenal go 2-0 up after 32 minutes, Manchester United got itself back into the game through Cristiano Ronaldo and had a chance to tie the game 12 minutes into the second half with a penalty kick. Ronaldo, who has converted more penalties than most of his teammates have even attempted in practice, didn’t take the spot kick.

Instead, Ronaldo’s compatriot Fernandes took the penalty. As he did in September against Aston Villa, the Portuguese midfielder didn’t even hit the target with his attempt. That didn’t stop Ramsdale from celebrating/taunting Fernandes in his face as if he’d just made the save of the century, jumping off his line to fist-pump right in front of the Manchester United player.

Bruno Fernandes misses the penalty. His shot goes off the post and out for a goal kick.

Too much? If you’re a Manchester United fan, probably. Arsenal fans just fell more in love with the young goalkeeper and are probably convinced Ramsdale used Jedi mind tricks to send the shot wide. Neutrals are eating up the drama because who doesn’t love watching a former powerhouse struggle?

The Fernandes penalty miss was a turning point in the match. Though Arsenal was strong early, Nuno Tavaras and Bukayo Saka scoring in the first half, United had taken control by the second half and looked sure to equalize, especially after Ronaldo’s well-taken goal in the 34th minute. The strike was CR7’s 100th Premier League goal and showcased the striker’s undying desire to score as he was marked by two defenders and still was first to the cross.

Ronaldo scores to bring United back into the match.

Manchester United struck the post a few times in search of an equalizer that would never come. Ronaldo had the ball in the back of the net, but he was offside.

Eventually, Arsenal began to reassert a bit of control, and it paid off in a thunderous strike from Granit Xhaka. The Swiss midfielder had picked up a petulant yellow card for kicking the ball away moments earlier but showed what he can do when he kicks the ball toward goal to send the Emirates Stadium crowd into raptures.

WHAT A STRIKE GRANIT XHAKA! :⚡

Arsenal take a 3-1 lead over United.

Arsenal moved, at least briefly, into fourth place on 60 points, three ahead of Tottenham prior to Spurs’ match with Brentford later Saturday (Tottenham has better goal difference). United is in sixth, six points back of Arsenal having played a match more, meaning Ronaldo could be playing in the Europa League next season barring a surprise finish. The Red Devils don’t look like making a late charge after losing a fourth straight away match in the Premier League, something the club hasn’t done since 1981.

Here are the full-match highlights, including the aforementioned goals from Tavares and Saka.