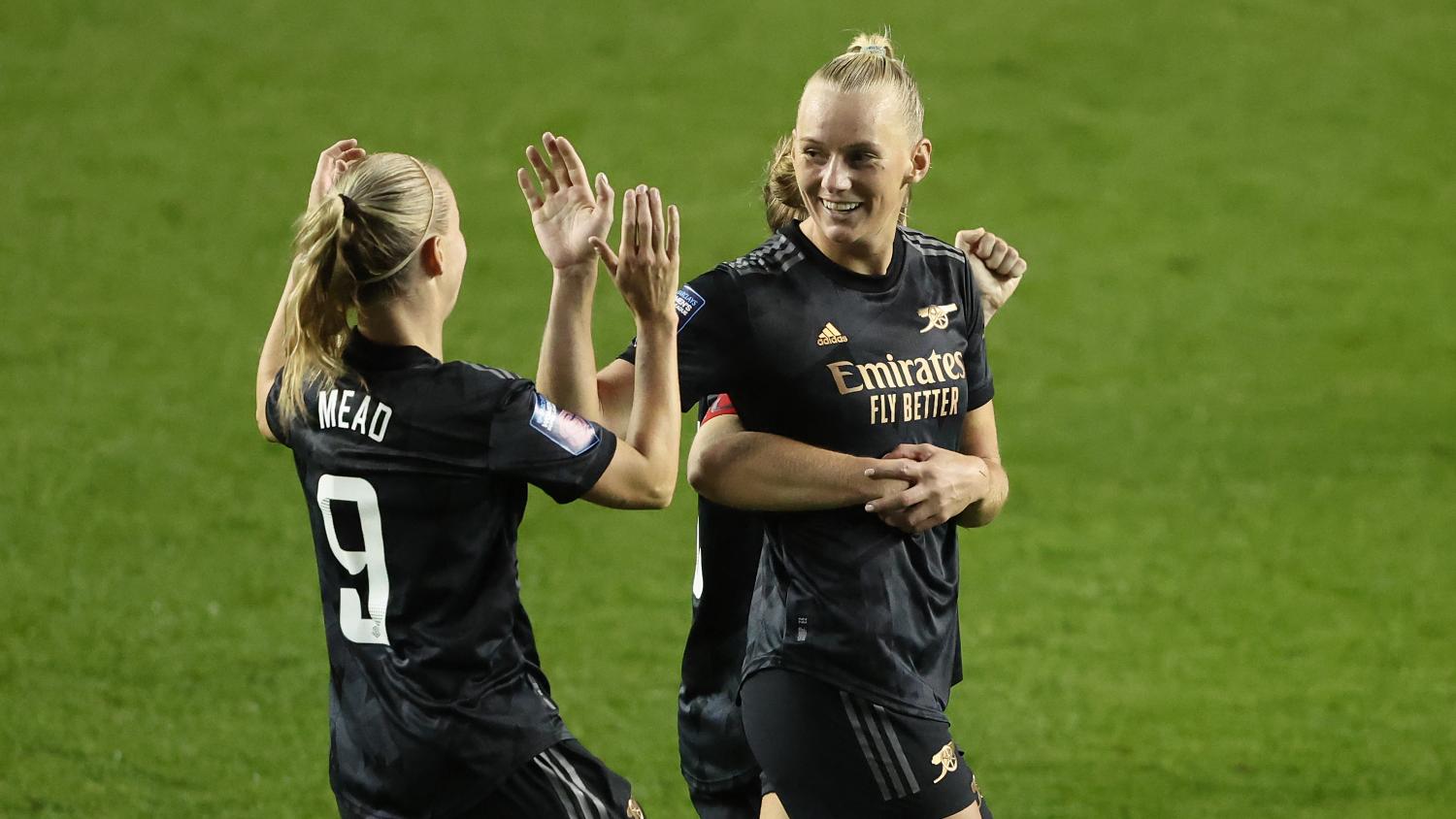 The 2022-23 UEFA Women's Champions League group stage began Wednesday with a marquee matchup between defending champions Lyon and quarterfinalists Arsenal at Parc Olympique Lyonnais, and the result sent shockwaves around the world.

Lyon was without the injured duo of Ada Hegerberg and Catarina Macario — who finished seventh and ninth, respectively, in 2022 Ballon d'Or voting — but the game was still contested by a wealth of players who were finalists for football's biggest individual prize, including Lyon keeper Christiane Endler (12th) and defenders Wendie Renard (eighth) and Selma Bacha (14th), while Arsenal countered with Beth Mead (second) and Vivianne Miedema (11th).

Arsenal had started the FA WSL season perfectly coming into this one with three wins from three, but Lyon's form in Division 1 Féminine was even better — five wins from five.

However, it was the Gunners who opened the scoring in Lyon with a direct piece of play in the 13th minute. Kim Little's ball from the halfway line found Stina Blackstenius running into space in the channel, and the Swedish striker struck a perfect first-time ball across the face of goal for Caitlin Foord to finish.

The Gunners take the lead over Lyon thanks to a goal from Caitlin Foord #UWCL LIVE NOW ⬇️
https://t.co/fZCJCq1pLe
https://t.co/0VIUGFNcvS pic.twitter.com/I6aXSG2HNa

That was unexpected, and then Arsenal hit repeat just 12 minutes later. Blackstenius again played the role of creator after breaking through the opposite channel and forcing Endler into a save, but the rebound looped to Frida Maanum and the Norwegian volleyed home through a forest of legs.

Arsenal's time in dreamland was short-lived. In the 27th, Bacha's corner was met by Lindsey Horan at the far post, and the American managed to turn an effort against the crossbar that rebounded for Melvine Malard at the doorstep.

We’ve got a game on our hands

Lyon manager Sonia Bompastor still wasn't pleased with what she was seeing out there and replaced defender Inès Jaurena with midfielder Damaris Egurrola in the 38th. It didn't generate the desired result. Right before halftime Renard was booked for a trip on the top of Lyon's area. Mead stood over the free kick, and England's Euro 2022 hero restored Arsenal's two-goal advantage by whistling a low drive beyond Endler.

Everything @bmeado9 touches turns to

3-1 to Arsenal at halftime would've been an insanely bold prediction, but the Gunners deserved it with an all-action display in the attacking third — both in possession and when pressing defensively.

Instead of an aggressive response from Lyon in the second half, Arsenal continued its dominance over the first 20 minutes. That superiority was rewarded in the 67th minute when Renard gave away possession (a microcosm of Lyon's casual terribleness all night) and Foord finished spectacularly (a microcosm of Arsenal's game).

Lyon went on tilt. Another disastrous pass allowed the Gunners to quickly break, and Mead got her second after collecting a simple pass from Maanum and finishing for 5-1.

The Gunners gunning Lyon's goal. Mead with the brace to make it 5-1!

It's not surprising but, as the eight-time winners of the competition, this is Lyon's heaviest defeat ever in the UWCL — they hadn't lost a game by more than a goal in this competition since 2009. Next up is a difficult trip to Turin to play Italian champions Juventus.

Arsenal, after getting hammered by Barcelona in last year's group stage before bowing out to Wolfsburg in the quarters, is now a legitimate contender and hosts Zürich at the Emirates on Oct. 27.