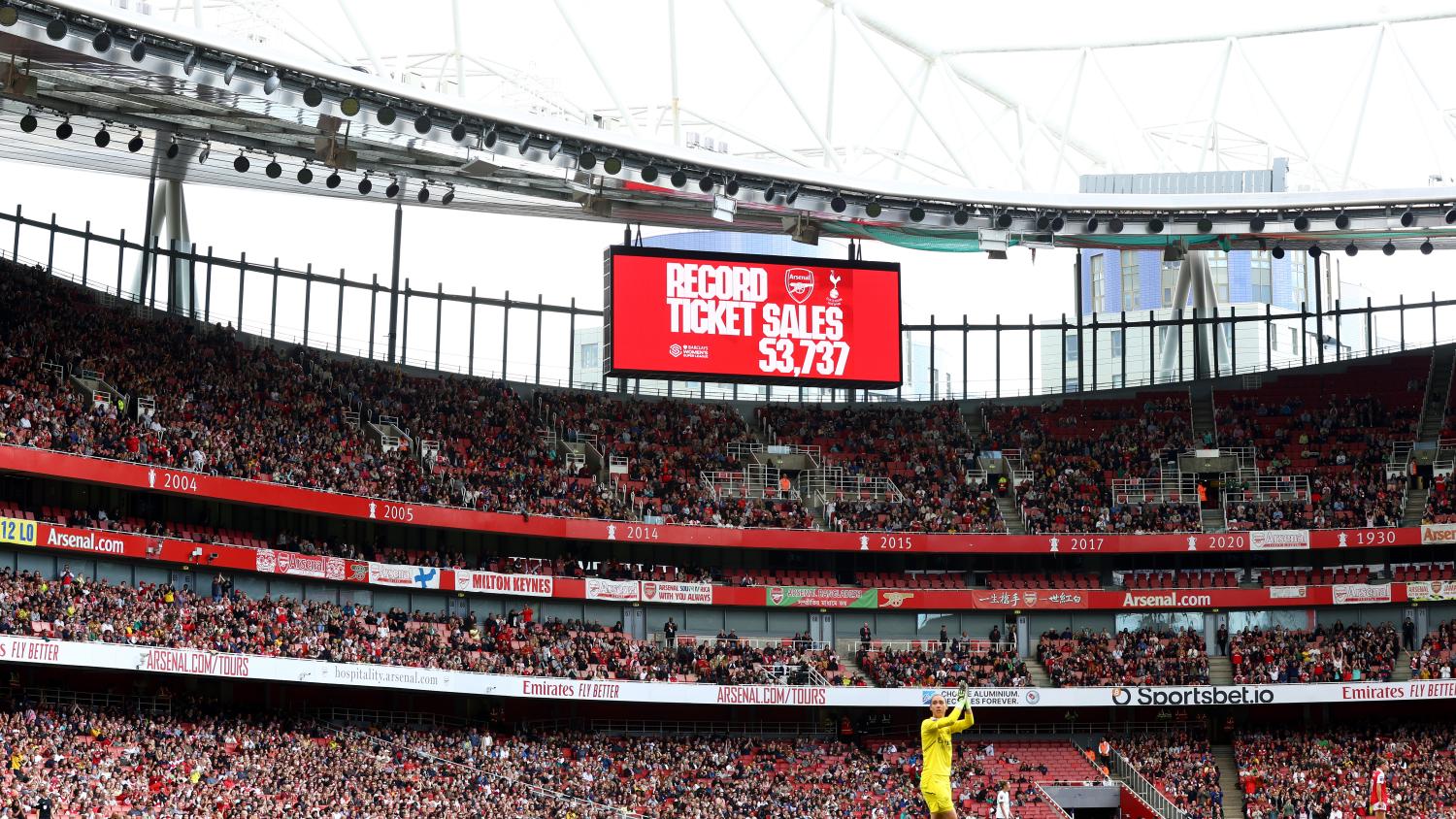 Arsenal cruised to a 4-0 victory on Saturday.
Getty Images

Vivianne Miedema scored twice in Arsenal's commanding 4-0 victory over Tottenham Hotspur in front of a Women's Super League record crowd of 47,367 at the Emirates Stadium on Saturday.

Dutch international Miedema struck in either half after Beth Mead scored the opener, with Rafaelle Souza also getting on the scoresheet in a dominant performance for the hosts, to the delight of the partisan crowd.

The attendance fell short of the 53,737 tickets sold for the match but still smashed the previous record of 38,262, which was set in the reverse fixture in 2019 when Arsenal won 2-0 at the Tottenham Hotspur Stadium in the WSL's first north London derby.

"We played really well today, we were patient and compact. The fans being here gives us such an energy. Hopefully this is just the beginning," said Mead, who received a standing ovation on her 100th WSL appearance.

Having finished England's victorious Euro 2022 campaign as the tournament's top scorer, Mead had netted twice against Brighton & Hove Albion last weekend and continued her fine form by curling home a sublime goal after five minutes on the clock.

"I still feel like I'm on cloud nine," Mead added. "I don't think it will sink in for a long, long time."

Miedema doubled Arsenal's lead six minutes before the break, slotting past goalkeeper Rebecca Spencer with ease after Spurs carelessly gave away possession deep inside their own half.

Arsenal take advantage of some slack defending and double their lead before halftime. pic.twitter.com/EjHKaQVggi

Rafaelle found the back of the net with a towering header 10 minutes after the restart before Miedema got her second in the 67th minute, nodding home Steph Catley's cross after beating Spencer to the ball from close range.

Arsenal are having a day in the North London Derby. ⚔️ pic.twitter.com/xL5B2swmeM

Vivianne Miedema has a brace and Arsenal have their fourth!

They are having fun out there against their rivals. pic.twitter.com/IwyFeGqatb

Scenes at the Emirates. pic.twitter.com/aWDPsib6J3

(Reporting by Hritika Sharma in Bengaluru, editing by Pritha Sarkar and Christian Radnedge)