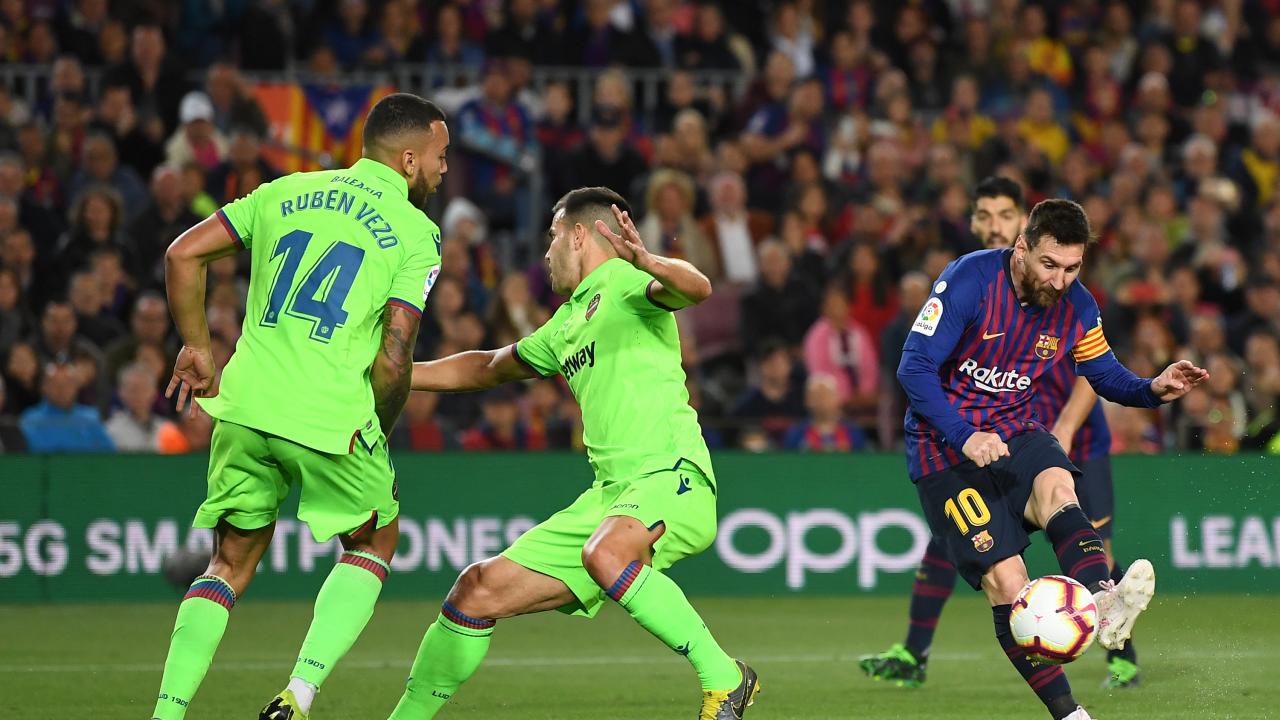 Lionel Messi started Saturday’s match against Levante on the bench on Saturday. With a big match against Liverpool in the Champions League semifinals on Wednesday, Ernesto Valverde wanted to rest his star man, knowing any win in the final four matches would wrap up the LaLiga crown.

But after a scoreless first half, Valverde had no choice but to bring on his Argentine maestro — and you already know where this is going.

Lionel Messi scored in the 62nd minute to lift Barcelona to a 1-0 victory over Levante, propelling the Blaugrana to their 26th LaLiga trophy. Barcelona has won eight of the last 11 league titles; only Real Madrid has more all-time LaLiga titles with 33.

Barcelona clinched the title with three matches to play while nine points ahead of Atlético Madrid because the Blaugrana hold the head-to-head advantage, which is the first tiebreaker in LaLiga (in England it’s goal difference).

Remarkably, the LaLiga crown is an eighth straight league title for Arturo Vidal, who set up Messi’s goal. Vidal won four straight with Juventus followed by three consecutive with Bayern Munich and now this trophy with Barcelona.

Barcelona had just about a billion chances in the first half but couldn’t break through against Levante, which has the second-worst defense in LaLiga.

But Messi is a difference maker if ever there was one.

He provided that difference just after an hour into the match when he used that magnificent left foot of his to shoot Barcelona into the lead.

While Messi is a regular in the starting lineup for Barcelona, the goal was his 24th off the bench, the most this century.

24 - Lionel Messi has scored 24 goals as a substitute in @LaLigaEN, more than any other player in the 21st century. Rescuer. pic.twitter.com/bWgbi1dRRX

Despite the goal, Barcelona didn’t have an easy time seeing out the match. Levante forced Marc-André ter Stegen into some big plays and probably should’ve forced more saves from the Barça keeper.

But the Blaugrana held on, Messi getting the last defensive touch, leaving the Champions League and Copa del Rey to play for this season in Barça's pursuit of the treble.

Barcelona hosts Liverpool in the first leg of the semifinals on Wednesday to be followed by a trip to Anfield the following Tuesday. Liverpool, meanwhile, is still in a heated race for the Premier League title with Manchester City.

Barcelona faces Valencia in the Copa del Rey final will be May 25, a week before the Champions League final.