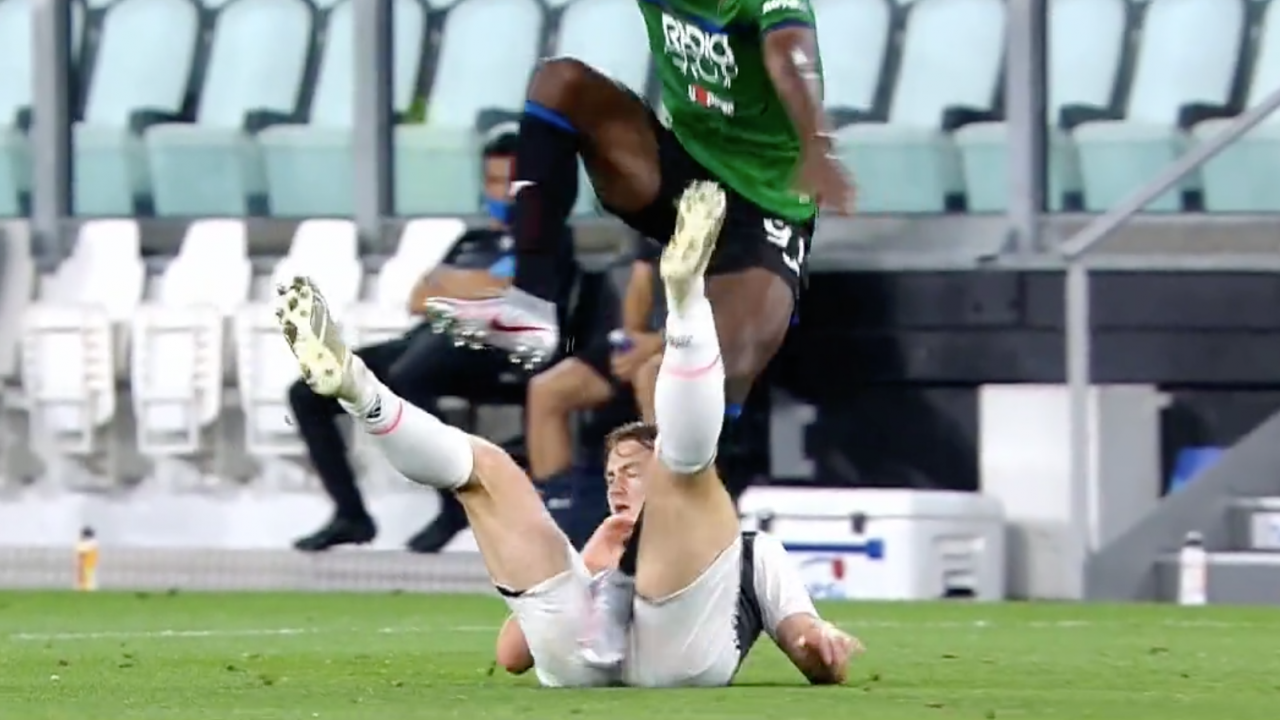 Duván Zapata scored the first goal for Atalanta in a 2-2 draw with league-leading Juventus on Saturday. Moments later he added injury to insult in quite possibly the worst way imaginable with the Zapata stomp on Matthijs de Ligt.

Zapata, a 29-year-old Colombian striker, gave Atalanta the lead when he brushed past Rodrigo Betancur to reach a pass from Papu Gómez, firing a low shot past Wojciech Szczesny in goal.

The lead was well deserved for the visitors, who had dominated the match up to that point.

Zapata raced de Ligt for a ball, trying to muscle the Dutch defender out of the way. De Ligt, unlike Betancur, wasn’t going to be pushed around and easily maintained balance and kicked the ball away. Zapata jumped to avoid de Ligt’s fair slide, but instead of trying to avoid landing on his opponent, speared his left leg into the ground, catching de Ligt’s nether regions in the process.

Fucking hell that looked painful. Reminds us of the time Steve Gerrard had to receive four stitches to his penis but stayed in the game.

The referee failed to notice the late challenge, his head having already turned to follow the path of the ball. VAR also apparently failed to notice the seemingly deliberate nature of the Zapata stomp, as the Atalanta player escaped any punishment. In Zapata’s defense, de Ligt left his boot quite high and could’ve injured Zapata as well.

De Ligt, unlike Gerrard, did not need stitches and stayed in the game, playing the full 90 minutes. People in America are whining about having to wears masks to prevent death and here’s de Ligt taking a cleat to the crotch and playing on like a champ.

Perhaps in part due to the horrific challenge on de Ligt, Juventus eventually turned the tide of the match and equalized in the 55th minute. Cristiano Ronaldo smashed home a penalty kick following a marginal hand ball call. (It was probably the right call, if not a tough one to swallow for Atalanta fans.)

Despite Juve’s growing influence on the match, Atalanta’s Ruslan Malinovskyi netted the next goal with a marvelous strike from just inside the 18.

After taking the 2-1 lead, it looked like Atalanta was on its way to overtaking Lazio for second place in Serie A.

Unfortunately for the upstarts, Juventus received yet another penalty kick for a hand ball, and Ronaldo again made no mistake from the spot.

Say what you want about Ronaldo scoring a lot of penalties, he’s damn good from 12 yards out. Ronaldo now has 28 goals in 29 Serie A games, putting him one behind Ciro Immobile for the league’s top scorer. The Portuguese striker is attempting to add Serie A to his list of leagues he’s led in scoring, following the English Premier League and LaLiga.

Perhaps the two penalties were justice for the missed Zapata stomp on de Ligt.

The shared spoils left Juventus with 76 points, eight ahead of Lazio and nine ahead of Atalanta, both of which could be caught by Inter Milan, which hosts Torino on Monday.