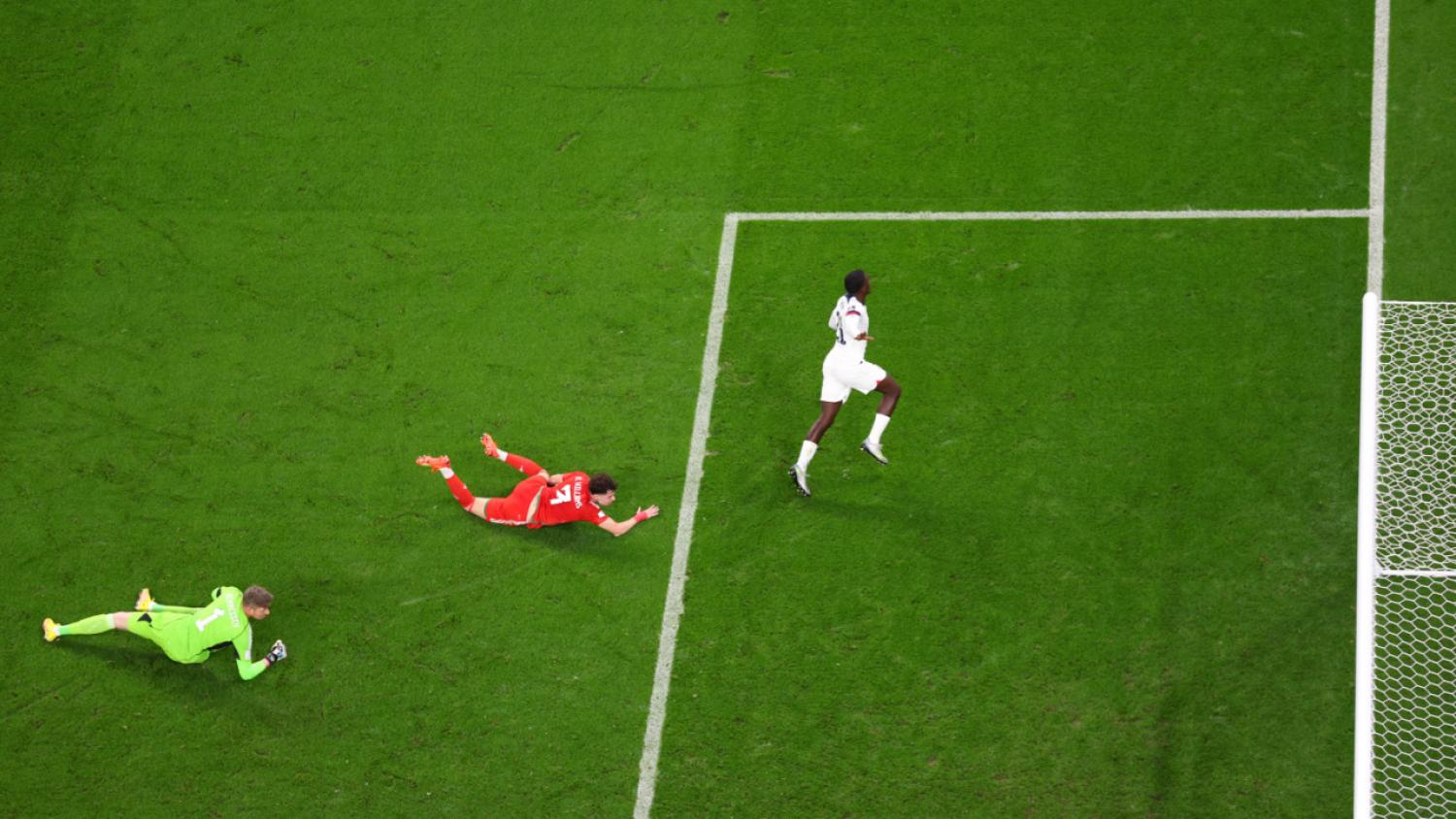 The U.S. arguably deserved a win but ultimately settles for a point after a late penalty for Wales.
Getty Images

3,065 days removed from elimination at the hands of Belgium in 2014, the United States began its World Cup campaign with a heartbreaking 1-1 draw against Wales. With the hopes of a nation on their backs, the Stars and Stripes came to play in the first half, epitomized by Tim Weah’s goal just after the half-hour mark, but ultimately a late penalty from Gareth Bale saved a draw for the Dragons.

The U.S. set the tone in the first half by dictating play and being rewarded with the best chances. Weah in particular was a nightmare for Wales, creating several dangerous opportunities before he found the back of the net in the 35th minute. Pulisic’s attacking surge through the middle of the park allowed Weah to find room between the stretched Welsh defense. The Hershey, Pennsylvania native slipped a pass through the gap for Weah to poke home brilliantly.

This angle of Tim Weah's goal is EVERYTHING @USMNT pic.twitter.com/mFm8ZzMIK7

Going into today, there was much skepticism regarding Gregg Berhalter’s tactics and system, pointing to difficulty in turning possession into attack. Two goalless warm-up matches against Japan and Saudi Arabia only strengthened those criticisms, but the performance against Wales should be looked at as a step in the right direction.

The midfield of Weston McKennie, Tyler Adams and Yunus Musah maintained possession well and found great help going forward thanks to the advancing runs of Antonee Robinson and Sergiño Dest. Pulisic and Weah were both dangerous in possession and added some much-needed width in the attack.

Another star on the night was Matt Turner, whose incredible save kept the Welsh off the scoresheet for the time being. Without much to do in the first half, the New Jersey native never lost concentration and showed exactly why he is and should be the starter.

Off the bench, Brendan Aaronson impressed immediately, showing off his incredible work rate, but other substitutes such as Jordan Morris and Haji Wright failed to make an impact.

The only criticism in the attack concerned Josh Sargent, who never looked comfortable or able to make a serious impact. This may open the door for a switch to either Jesus Ferreira or Wright going forward.

Injuries may also be a concern as several United States players found themselves needing the training staff. Pulisic, McKennie and Musah all received treatment during the match, so Berhalter would be smart to limit their involvement before their next test against England on Friday.

Bale sends the penalty home and ties it for Wales! pic.twitter.com/XCU4Hohfd9

A costly mistake from Walker Zimmerman gave Wales a late penalty that Bale calmly dispatched. The U.S. arguably deserved three points from the match but these moments are the difference in tournaments such as the World Cup.

While far from perfect, the American performance should give fans some much-needed hope. This year’s roster is loaded with talent, and good results will allow supporters to dream. As fans watch these games from bars, fan zones and every other conceivable venue, the narrative is changing second by second. The U.S. has a chance.