Tired Of USWNT Gear Never Available In Stores, Players Decide To Sell Their Own Merch

It seems to happen every time the U.S. women’s national team plays in a major tournament. Fans flock to stores online and in person seeking USWNT merch. Almost without fail, Nike, the U.S. Soccer Federation and other outlets quickly run out of stock, never learning from past mistakes to properly prepare for spikes in demand.

The USWNT Players Association launched its own line of USWNT merch on Thursday, taking full advantage of bargaining for their name, image and likeness rights in 2017.

We will continue to add more products so that there is merchandise available for every member of the PA.

The store, which you can find here, currently features shirts, balls, dolls and more of some of the more popular USWNT players. The USWNTPA said it will eventually sell gear for all members of the association.

One shirt says “America’s Fútbol Team,” another “Play With Love,” one’s got four stars for four World Cup titles and one simply says “Pay Women.” There are also shirts for individual USWNT players. 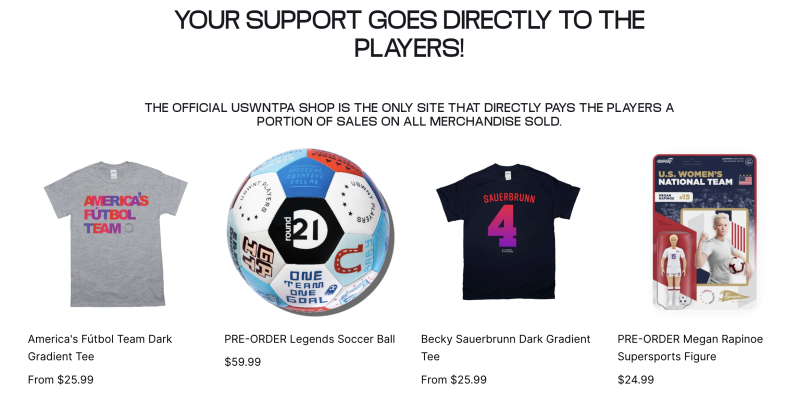 While none of these items are Nike-licensed U.S. jerseys, they give fans a way to support the team and, vitally, give money directly to the athletes.

“This is meant to be additive to what’s out there,” USWNTPA’s Anne Reid told USA Today. “We don’t want to narrow the spaces where fans can find things, we want to expand on it. There’s just not enough retail space out there. … We want to make sure there are more places fans can find what they want.”

Far too often, women’s sports merch is impossible to find in soccer and other sports. During the 2019 Women’s World Cup, USWNT jersey sales broke records and Nike was unable to meet demand, a sad moment of déjà vu.

If this happens EVERY TIME the @USWNT is playing in a major event then it’s not “unprecedented” or unpredictable. Your model is broken.

I know it’s not easy, but you give away money, exposure & loyalty every time you fail to deliver. You have to do better. pic.twitter.com/WDOu7Kapc9

The USWNT collectively bargained for rights to their name, likeness and image in 2017 and during the 2019 Women’s World Cup, Alex Morgan, Kelley O’Hara and Allie Long made north of $1 million selling T-shirts.

Now the USWNTPA will take a cue from Bender and sell USWNT merch for all players so that, like the shirt on the store says, they can pay women.