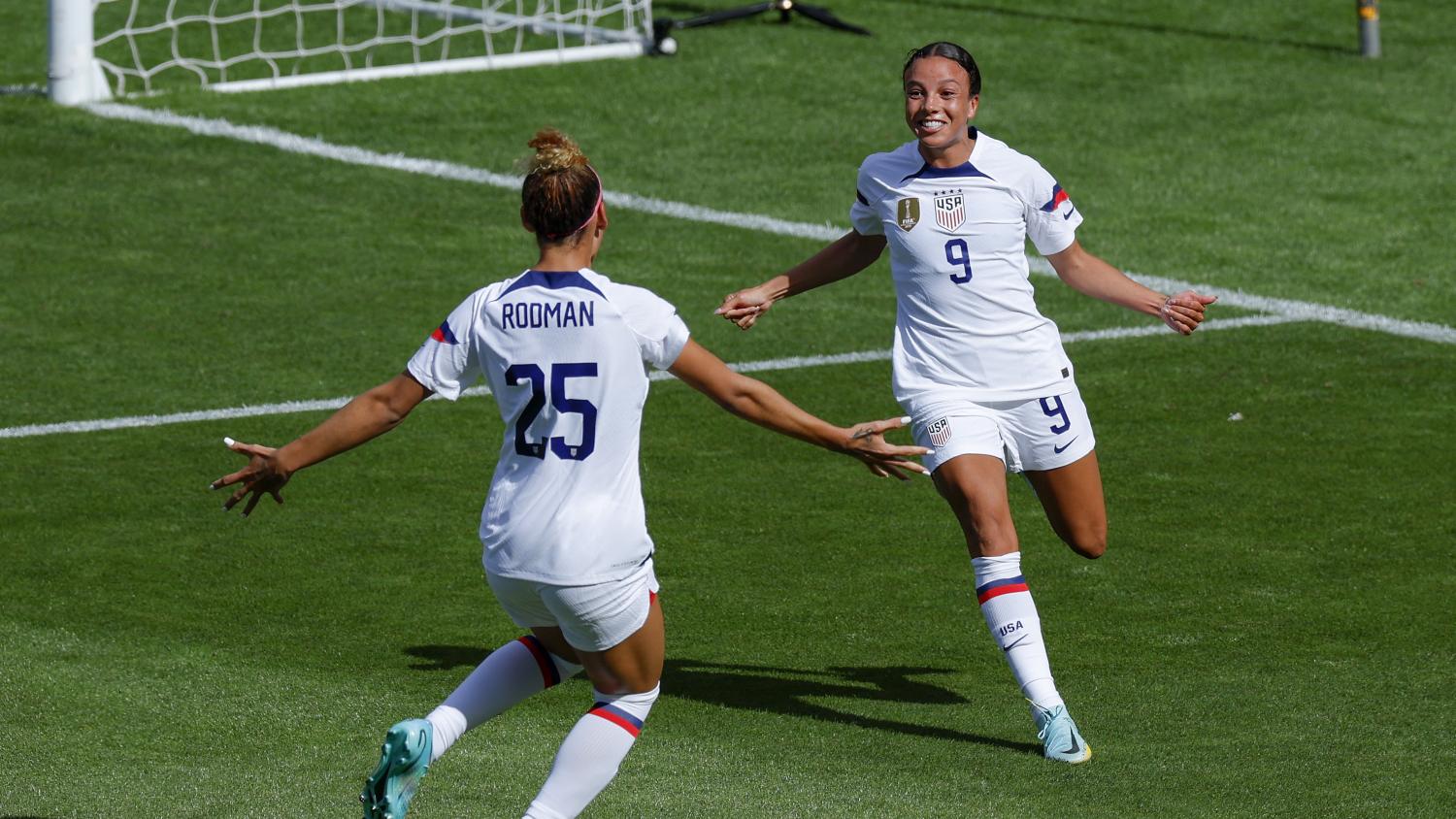 After an eight-year deal worth around $200 million was struck between U.S. Soccer and WarnerMedia last March, Tuesday's friendly between the USWNT and New Zealand served as the beginning of a new era with the match broadcast on HBO Max.

The $16 per month price point must've proven a barrier to many, but my advice is to instruct your parents to conceive you a sibling and then get that prodigal offspring to share their login and password with you (shoutouts to my younger brother and sister-in-law).

If that approach fails, could you ever be justified in spending the money? Is HBO Max's coverage more like the first eight episodes of House of the Dragon (slow-moving world building, low stakes, little intrigue) or the final two (10/10 masterpieces of cinema)? I turned on my TV to find out.

The USWNT on HBO Max experience

Let's see how easy the match is to find in the menu — something Paramount+ really struggled with for quite a while.

This is the first-ever live sporting event on HBO Max, so there's understandably no "Sports" option in the menu toolbar. Some poor software engineer needs to rethink this whole thing.

But on the main homepage slider, right after the featured image for new episodes of Gossip Girl, there's the USWNT vs. New Zealand with a nice composite image of Alex Morgan and Ali Riley.

Sara Walsh hosts while former U.S. stars DaMarcus Beasley, Shannon Boxx and Julie Foudy are joined by play-by-play commentator Luke Wileman in the pregame show. The one broadcast member actually in Wellington, Melissa Ortiz, provides a voice-over and then features in a pre-recorded interview with Vlatko Andonovski.

Wileman exits stage left. He looked very uncomfortable in this setup of five people standing around and speaking at the camera. I'm not surprised he didn't want to dance off the set on command, but it would've been a great moment if he pulled something insane out of the hat.

Beasley and Boxx have combined to say "exciting" six times. New Zealand better bring it. Run DMB also points out a starting place for Crystal Dunn — if she's back to her best in July, the U.S. is at another level.

Who is this Mallory Swanson, HBO Max asks. The18 already answered that.

Credit where credit is due, HBO Max really knows how to do these hype videos. They're infinitely better than what we've seen on any other channel. "Welcome home" they say. I'm metaphorically crashing at my brother's place but thank you.

Wileman and Foudy have shuffled over to their darkened room stateside to call the game.

There's a record crowd of over 10,000 here for the Football Ferns in Wellington, but it's a 34,500-seat stadium. It'll be full when New Zealand plays the Philippines on July 25 and when the USWNT plays the Netherlands on July 27. Still, that crowd is roaring on every challenge from the home side.

These U.S. home jerseys aren't growing on me. The New Zealand All Blacks look is much better.

There are no in-screen replays? We miss about 15 seconds over a replay that's not worth watching.

15 minutes in and New Zealand's press is really disrupting the United States. The Football Ferns haven't done anything in possession, but they're looking for a U.S. mistake that might yet come.

Foudy points out how Lavelle has space if the U.S. can reach her. She's got a great point and then a couple minutes later Midge Purce plays Lavelle through before she ultimately fires wide.

19 minutes in and after some incredible wing play from Purce, Horan misses an absolute sitter. It's a simple pass into the back of the net and Horan plays it right at the feet of goalkeeper Erin Nayler.

28 minutes in Purce finds the goalkeeper off her line and goes for a clearly intentional lob from out wide. Both Wileman and Foudy question the intention — I have no idea why, it's obviously a shot — but it crashes off the post.

Purce has been the best attacker through 30 minutes.

In the 42nd minute, it's clear that the Manchester derby has confounded everyone's understanding of the offside rule. Foudy is adamant that since Horan, from an offside position, doesn't get a touch on a U.S. free kick that goes directly into goal, she shouldn't be flagged for offside. But she is and she's clearly interfering with play. If that's not offside, then every team should plant one person directly in front of the opposing keeper at all times. It's offside.

Ortiz grabs Purce for a mid-game interview on the way to the dressing room.

0-0 is not the start we expected on HBO.

I'm still really enjoying no commercials. Boxx correctly says there's no urgency, and Beasley says he's not really surprised because there's nothing on the line. He's so right, but one thing he doesn't address is how stale and predictable Andonovski's approach has become — with both tactics and personnel — over the last couple years.

Beasley wonders what Foudy has been smoking and what's in her cup for thinking that Horan wasn't offside. That's good TV.

We're now talking about Sophia Smith and everyone has a very longing look in their eyes. The NWSL MVP is clearly missed.

Beasley is getting rattled by the Mallory Swanson name change. He should've read The18 article beforehand.

Now Rodman misses a sitter in the 48th. Then Lavelle goes off on a driving run before firing wide in the 50th.

The USWNT finally gets its deserved opener in the 52nd when Rodman's driven cross is met emphatically by Swanson. It's a glorious header.

Alex Morgan makes it 2-0 in the 60th, and the assist from Lavelle isn't mentioned by Wileman or Foudy. I'm serious. Neither says a damn thing about how insane this pass is and then Lavelle's taken off directly after. Praise her!

Foudy points out how things could really get ugly for a New Zealand team with players all across the spectrum (college, semi-pro, offseason) and the U.S. scores a fourth. It's a great snapped header from Lynn Williams and another Rodman assist.

It ends 4-0 and that's about right. We'll do this all again Friday. I'm not sure it's worth $16 for what HBO Max provided, but that Rose Lavelle assist was worth $16.

Quite a first @USSoccer postgame show on HBO Max. DaMarcus Beasley: Gregg Berhalter lost locker room and has got to go. Foudy: "I don't think Gregg can continue."

More DMB: "US Soccer, for one, can’t stay with Berhalter… I hope Cindy or Earnie or whoever’s making the decisions can see that... before this, I was on the Gregg Berhalter train"

Boxx: "Unfortunately I think I have to agree w/ you… feels like maybe they need a fresh start"