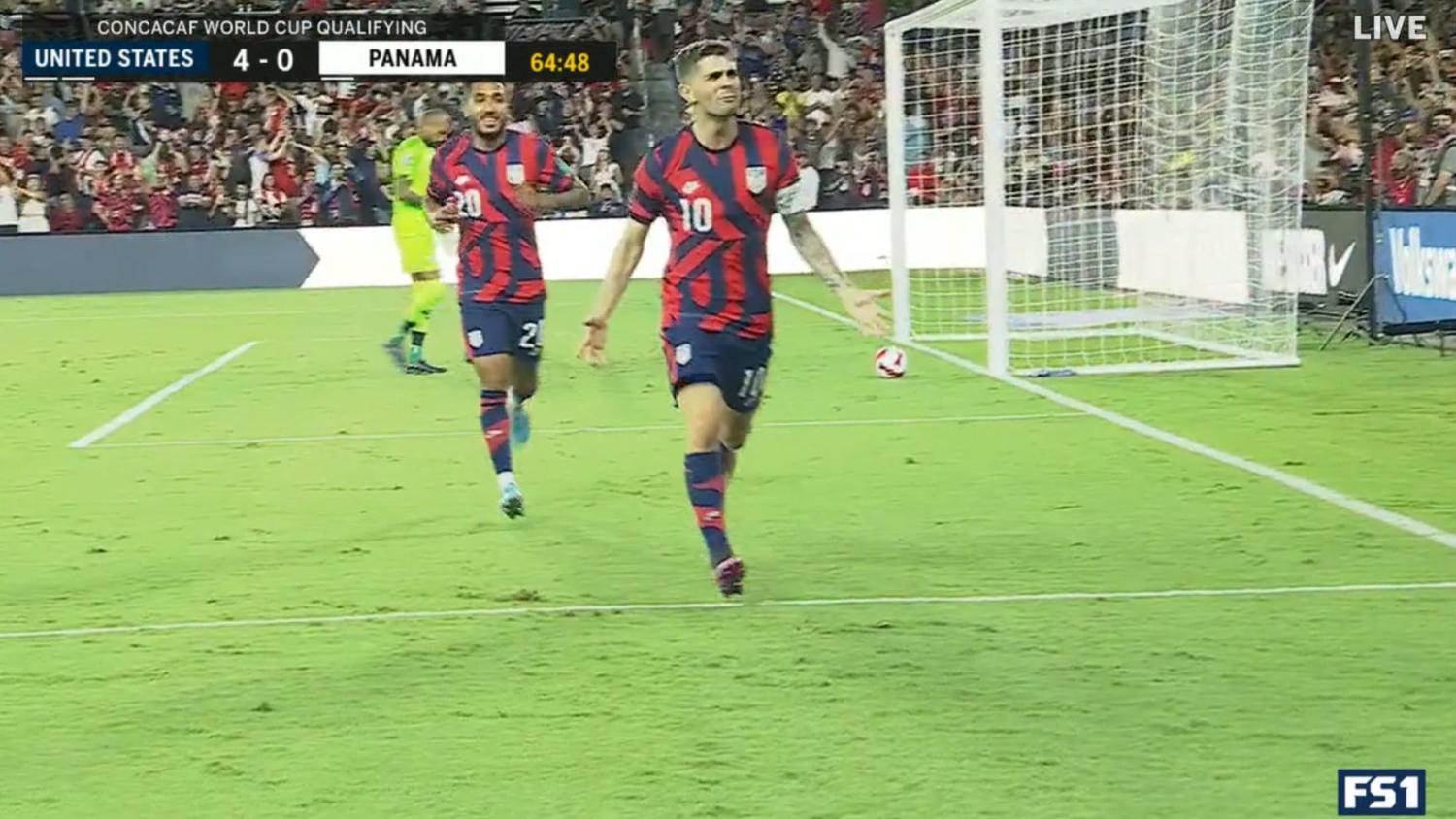 Barring a six-goal defeat in Costa Rica, the USMNT has qualified for the World Cup.
@usmntonly | Twitter

The USMNT effectively qualified for the 2022 World Cup on Sunday night in Orlando with an impressive 5-1 victory over Panama at Exploria Stadium. Christian Pulisic recorded his first U.S. hat-trick when his country needed him most, Paul Arriola connected on a rare header and Jesús Ferreira added one after Gregg Berhalter trusted him to lead the line.

Every Berhalter decision effectively proved the Midas touch, and there will be no tinkering in Qatar with some of the relationships he's developed over the course of the qualifying cycle – most obviously the center back pairing of Walker Zimmerman and Miles Robinson.

It was Zimmerman, fresh off his monstrous performances against Honduras and Mexico, who earned America's first penalty. A Pulisic corner was directed straight at Zimmerman but the Nashville defender went down after Aníbal Godoy got a little slaphappy.

We've all seen a lot worse in Concacaf, but in the era of VAR, you know its a penalty when the referee goes to the monitor. Godoy left the authorities with no other choice.

Pulisic stepped up and roofed his penalty like a stone cold killer. He's written beautiful Players' Tribune articles about how much it hurt not to qualify for the last World Cup and what it means this time around, so to see him have this chance and take it... there can be no doubt that Pulisic's a big game player at this point. Qatar will be his stage.

PULISIC BURIES THE PENALTY TO PUT THE USA UP 1-0 @cpulisic_10 | @USMNT pic.twitter.com/EtjKCaMv8Q

Panama almost equalized minutes later but Zack Steffen got a vital touch and then lived dangerously until the U.S. was able to clear. The American defense did have its nervous moments as Panama attempted 10 shots, proving there is such a thing as asking too much of Tyler Adams.

But that proved a decisive moment because on 23 minutes, after a great ball from Zimmerman to release Pulisic, Jedi Robinson took possession out wide and found Arriola for the two-goal advantage. According to FS1, it was the second recorded header of Arriola's career.

Panama knew that a defeat would end its World Cup dream, and 2-0 really felt like the death of Los Canaleros' campaign.

In the 27th minute, Luca de la Torre released Shaq Moore out wide and he picked out Arriola. The FC Dallas winger's quick turn and shot ended up at the feet of club teammate Ferreira to provide the finish.

In a way, this was the ultimate Berhlater goal in terms of personnel selection for the evening.

THE FLOODGATES ARE OPEN!@Jesusfcd27 makes it 3-0 for the @USMNT against Panama pic.twitter.com/xDiFZStxv2

The U.S. was then awarded a second penalty before halftime after Miles Robinson went down in the area. The referee pointed directly to the spot this time, although it was even softer than the first.

Pulisic stepped up again and despite Luis Mejía guessing the right direction, the Chelsea attacker buried it inside the post.

ANOTHER ONE FROM THE SPOT FOR @cpulisic_10

The @USMNT takes the 4-0 lead on Panama just before halftime! pic.twitter.com/zbOekaqe1c

The only thing left for Panama to do now was to get a bit schwifty.

But Pulisic didn't get mad — OK, he was momentarily mad — he got even. Look at this turn, nutmeg and finish in the 65th minute for the hat-trick.

CAPTAIN AMERICA WITH THE HAT TRICK

Incredible touch and finish from @cpulisic_10 to make it 5-0 for the @USMNT pic.twitter.com/yxFvcgnsoA

Panama managed to pull one back in the 86th minute through Godoy, but it didn't change the big picture at all.

If the USMNT avoids a six-goal defeat away to Costa Rica on Wednesday, they're in the World Cup. The Estadio Nacional in San José has never been kind to the United States, but it's never been that unkind.

More importantly, this U.S. team deserves more respect than speculating over that sort of disaster. They've more than earned it.