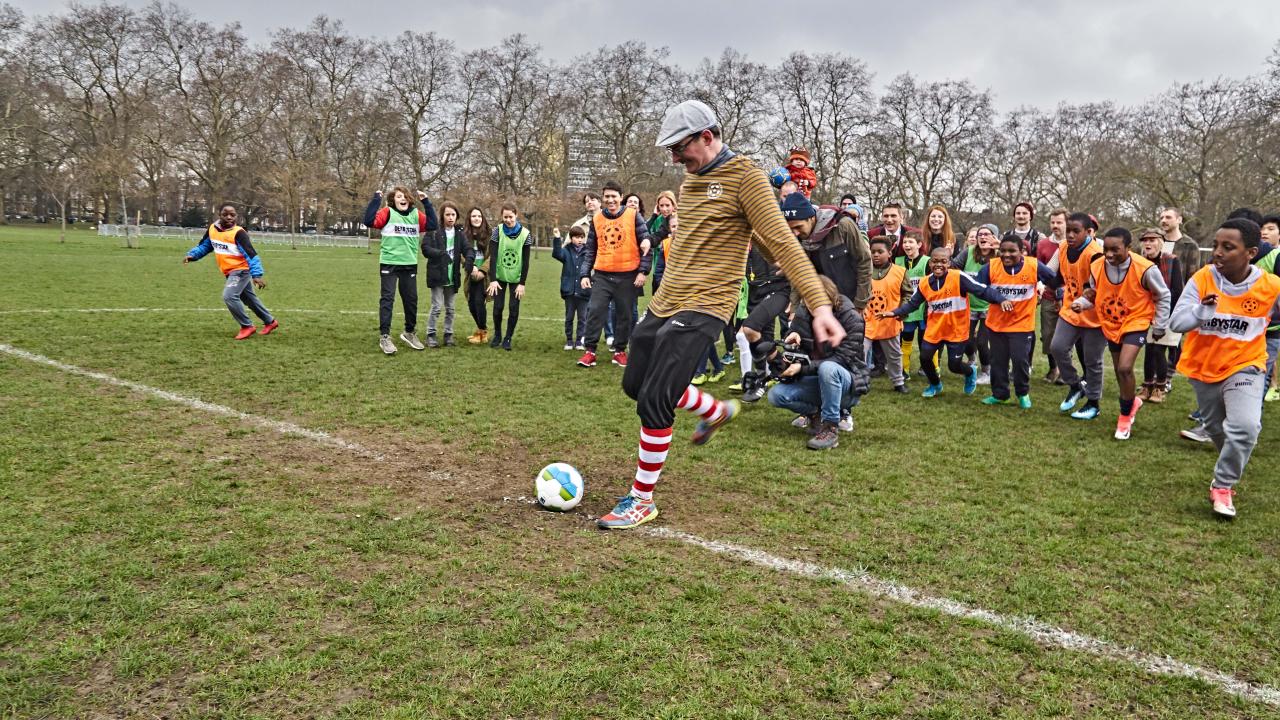 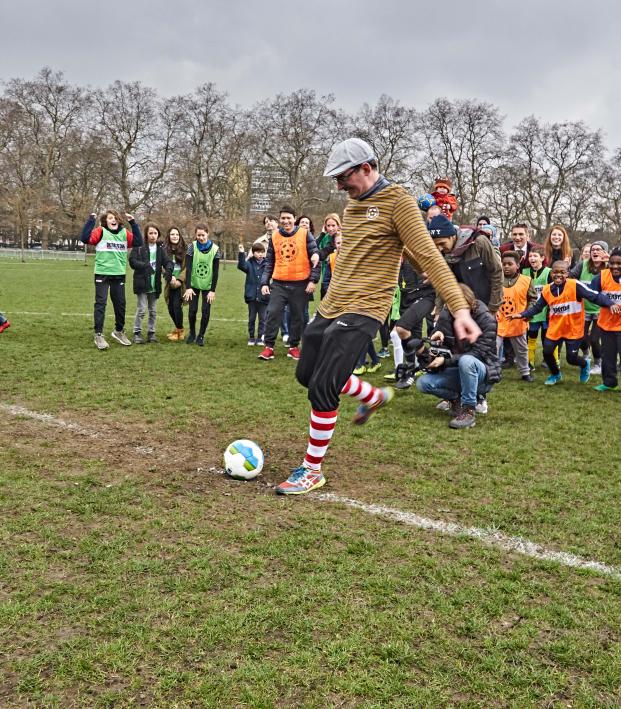 Spirit of Football "The Ball"

Spirit of Football: The Journey Of The World Cup's Olympic Torch

Bryce Badwan March 27, 2018
Every 4 years, the nonprofit organization "Spirit of Football" has traveled the world with a ball in hand as a symbol of tradition, fair play, respect and a celebration of football’s capacity to bring people together all over the world. This is their journey to Russia.

During a World Cup year, you are going to hear hundreds of amazing stories from across the planet. Like how Gabriel Jesus was painting the streets of Rio during the last World Cup and is now a vital part of the Selecao. Or how Mohamed Salah has captured the hope of an entire nation and helped send Egypt to the World Cup for the first time since before I was born (1990 for those wondering).

But then you hear about stories that have nothing to do with national teams or any superstar. Stories that show just how powerful the sport of football can be. Spirit of Football’s “The Ball” is one of those stories. This nonprofit has spent months leading up to the 2002, 2006, 2010, 2014 and now 2018 World Cups traveling the globe with a soccer ball giving educational workshops and showing how football can help displaced people find a new homes and build new communities. Director of the program Andrew Arias would say, “The Ball is a symbol of tradition, fair play and respect and a celebration of football’s capacity to bring people together all over the world.”

If you care to learn more about the program, check out our interview with Andrew and his colleague Benni here. If you want to see how their journey is going, then keep on scrollin'!

We decided to cover their awesome voyage and update this page as they travel throughout Europe on their way to Russia. Below you will see stories from people they meet on their travels and will hear what "The Spirit of Football" means to them.

The official Kick-off for the Ball 2018 to the World Cup started today! And every ball of the last five balljourneys come together to meet in the battersea park. On this pitch there was the first ever game with fa rules in 1864. 2002 -2006 - 2010 - 2014 -2018 One Ball, One World #oneball #oneworld #spiritoffootball #worldcup #theball2018 #fairplay #sof #football #aroundtheworld #theball #weltmeisterschaft #fußball #travel #travelers #unterwegs #worldcup #fifa #oneballoneworld

Day 2: "The Ball" stops at a pub in south London called "The Horse and Stables" where they met this lad named Corey.

Day 4: The Ball travels to Liverpool! Spirit of Football meet with Liverpool Manager Jurgen Klopp and he tell them what the "spirit of football" means to him.

#LFC Jürgen Klopp talks about what the sport of football means to him.
: @the_ball pic.twitter.com/FhcuuxIO2H

Day 5: The Ball makes its way to Stonehenge! Where apparently you are not allowed to show off your heading skills.

Day 6: The Ball heads to Belgium! They stopped at a Belgian school called 'Königliches Athenäum Eupen'. There, they where they conducted workshops with the students. Take a look and see how many languages you can recognize!

Day 8:The Ball goes to KAS Eupen FC! Their players know the saying! One Ball, One World!

Day 12: The Ball has made it's way to Erfurt, Germany! There they met with the Steigerwald Fankids and visited the first team training of FC Rot-Weiß Erfurt

Day 18: The Ball starts it's 10-day tour of Germany. Their goal is to run the 'One Ball, One World' education workshop in learning centers directly in Bundesliga football stadiums across Germany. Lernort Stadion e.V. and the DFL Stiftung are their partners. Fanprojekt De Kull was the first learning center that they visited located directly in the stadium of Borussia Mönchengladbach. Today we worked with 27 seventh grade boys and girls.

We also had the chance to talk to Borussia Mönchengladbach's legendary coach Dieter Hecking. His statement about the Spirit of Football is here (in German).

Day 19: The ball got to feel the passion of the Revier Derby (FC Schalke 04 and Borussia Dortmund)

Spirit of Football e.V. run a workshop with 50 children from 2 schools: One from Dortmund and one from Gelsenkirchen. The topic was Derby Civil Courage. With the help of Christoph Metzelder who played for both clubs as well as Real Madrid C.F. the children came together and new friends were made.

Day 24: The Ball conducts a workshop directly in the Weserstadion at SV Werder Bremen! At the end of a workshop day everyone signs "The Ball". Today's workshop in Bremen was extra special. Our Ambassador, former DFB National team player and SV Werder Bremen Captain, Clemens Fritz was there to play football with the participants.

Day 26: A small film about one day of this remarkable story. This day we went with our incredible team Ghozii Kalinggamurdaning, Nicola Gabriel, Jean-Baptiste Lê & Benni Grünewald. Thanks to Der Hamburger Weg, DFL Stiftung, Lernort Stadion e.V. and of course our "The Ball" Partner Robert Bosch Stiftung.

What better farewell could you get as from the lovely guys from LaBrassBanda. LabrassBanda is a unique bavarian folk band, with heart, energy and passion for music, football and life.

One Ball, One World, One LabrassBanda

Day 32: The Ball visits Servus, Austria. Saturday they visited Vienna's football integration project Kicken ohne Grenzen (playing without borders). They organized a tournament with 17 teams at the #Prater. The Ball was impressed by the fairplay atmosphere amongst the intercultural players. They swapped one out of the 15 German national jerseys with head coordinator Alois Gstöttner. Now we are of to #Zagreb. #Karstadtsports #trikottausch

Day 35: The Ball is now in its sixth country: Serbia. We had amazing days in Croatia with a focus on homelessness. Today #TheBall2018 left the European Union, temporarily, and its on its way to FC Partizan Belgrade. Our Opel Vivaro from Autohaus Schinner - Service erleben in Weimar und Bad Berka and the team wrap up what has happened so far on the journey. Stay tuned! #youknowitmakessense

Day 36: Today The Ball made station in Serbia at a PASCH School supported by the Goethe-Institut Belgrad. An amazing day, with a lot of fun, theater and fair play football.

One Ball, One World.

Day 39: The Ball finishde up in Serbia and heads to Kosovo!

Day 41: What a nice warm welcome in for #TheBall2018 in #Kosovo! We recieved a lot of positive energy at the welcoming ceremony that The Ball will pass on to the participants at our upcoming workshop F.U.N. - Football Unites Nations. The Ball's partner the Friedrich-Ebert-Stiftung is bringing young people from Kosovo, Serbia, Macedonia and Albania together for this 3-dayF.U.N workshop! One Ball, One World

#theball2018 in bulgaria was astonishing. We visited the 70th birthday of cska Sofia, did workshops with refugees, schoolkids and roma in the suburbs of Sofia. The ball connected everybody. #travel #oneball #oneworld #journal #journey

Day 49: The Ball has made it to Turkey. One more stamp!

Day 50: Istanbul! The Ball was celebrated by and with school children. These are young people who we hope can help to make the world a happier and friendlier place.

We believe our One Ball One World message is more important today than ever before.