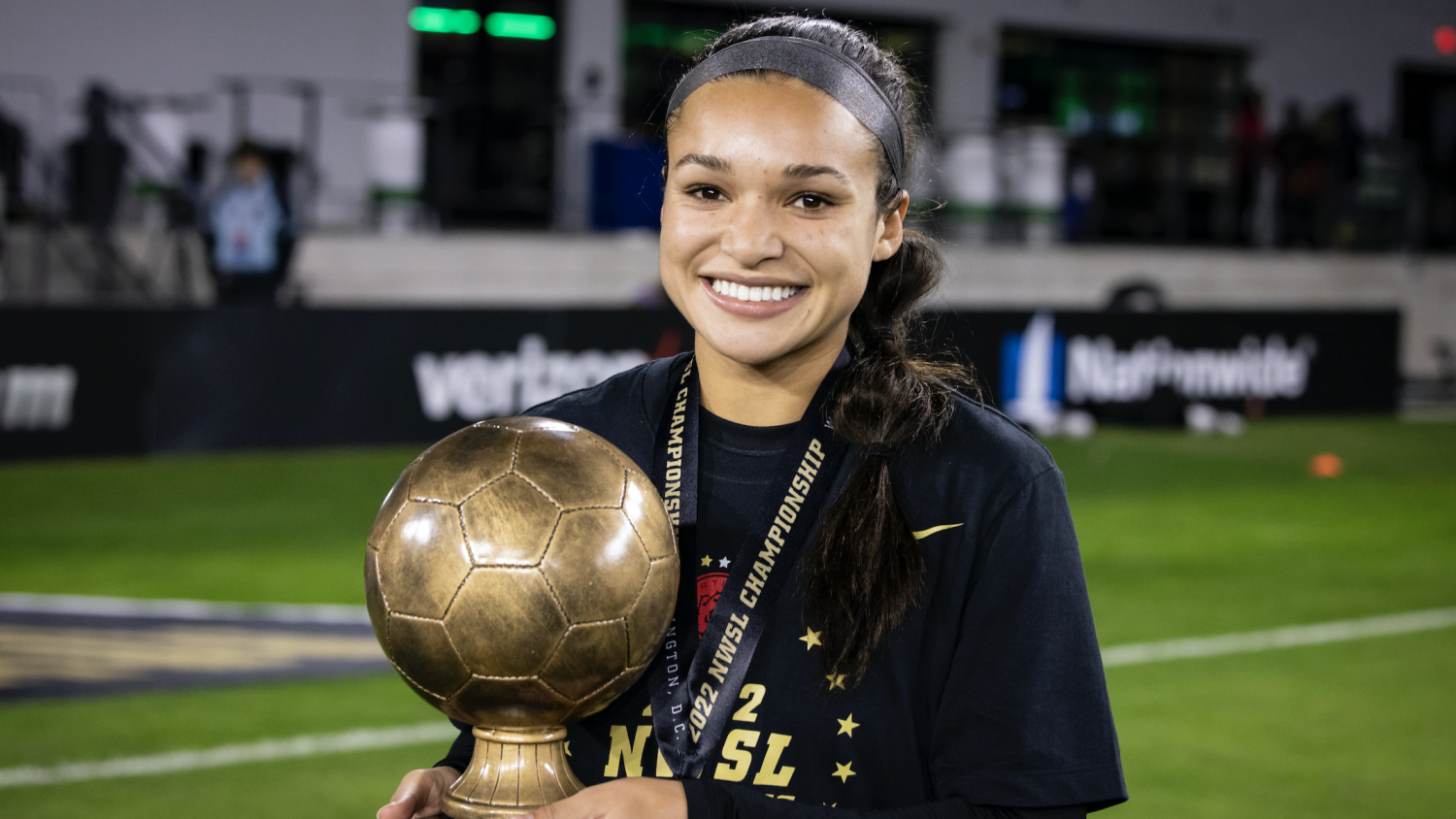 This is Sophia Smith’s world and we’re just living in it.
Getty Images

The Portland Thorns defeated the KC Current 2-0 in front of 17,624 fans at Audi Field in the nation’s capital on Saturday to win the club’s third NWSL Championship. Sophia Smith, the National Women’s Soccer League MVP, led her team to victory scoring the first and being involved in the second.

It was a momentous game for the league as the Championship game was CBS showed the game on national television during primetime for the first time in history.

The youngest league MVP in history got the game off to a flying start in the fourth minute with the game’s opening goal. The 22-year-old capitalized on a defensive error from Elizabeth Ball and then rounded KC Current and USWNT goalkeeper Adrianna Franch to open the scoring.

Smith, who won the NWSL Championship MVP award, is the youngest player to score in the Championship and the second player in history to win the league MVP and scored in a final. Smith is quickly becoming a USWNT icon.

Smith was sensational during the game and was inches away from doubling the lead in the 27th minute.

For Portland’s second goal she was barreling down on Kansas City’s goal looking to connect with a Yazmeen Ryan cross. Chaos ensued in the box with Franch getting a hand on it but then the ball deflected off Addisyn Merrick into her own goal.

That's ✌️ for @ThornsFC as a loose ball in front of goal finds its way in! #NWSLChampionship | #BAONPDX pic.twitter.com/FnBEATRFDg

This was the first own goal in NWSL Championship history.

KC put up a respectable fight in the team’s second season. The Current have nothing to be ashamed about being the first five seed to make it to the Championship. It’s a remarkable step forward after last season that saw the team finish bottom of the league with a 3-7-14 record and a negative 21 goal difference.

As the final whistle blew the Thorns celebrated their third title after having to deal with a season full of off the field pain, heartbreak and resilience.

The Thorns and the rest of the NWSL have played the season amid the abuse scandal, revelations of sexual misconduct and the findings from Sally Q. Yates’ investigation of the systemic issues within the league.

Portland was in the thick of the investigation with their former coach’s disgusting actions, top executives being removed from the club and owner Merritt Paulson stepping down as CEO.

Despite everything the team has had to deal with away from the action, the players didn’t let that stop them from accomplishing these moments on the field.

The women's game isn't going anywhere and these players deserve the best.

This trophy lift is EVERYTHING pic.twitter.com/gNQp0fkBbD