Travis Yoesting November 21, 2020
We can all thank VAR for ensuring this behavior didn’t go unpunished.

It didn’t take long for the MLS Cup Playoffs to heat up. Leave it to Florida to get this crazy party started.

While the playoffs technically started Friday with a couple of play-in games, the first round began Saturday with an afternoon clash between Orlando City and NYCFC in Orlando.

Nani converted an early penalty before Maxime Chanot equalized, all in the first 10 minutes. That set the stage for the shithousery that went down late in the second half, including some truly pathetic sportsmanship from Orlando’s Brazilian right back Ruan.

Late in the tied game, Ruan was pulled down by Gary Mackay-Steven. The Scottish winger then put all his weight on Ruan’s stomach as he pushed himself up. It was a dick move and he fully deserved the yellow card that followed.

But Mackay-Steven didn’t deserve the punishment given from Ruan, who kicked the NYCFC player in the crotch.

Well, Ruan sure wanted to get sent off. #ORLvNYC pic.twitter.com/PtfRXt5NPR

To make matters worse, Ruan then feigned an injury, as if he had been the one kicked. Mackay-Steven did press down on Ruan’s stomach, but there’s no way he could’ve caused much harm. But the Orlando City player acted as if he’d been stomped on. His teammates joined in to plead such obvious lies, clearly not having seen the replays, and Nani massaged Ruan’s stomach for some reason. We’re used to blatant lying in Florida coming from Mar-a-Lago, not from Exploria Stadium.

I mean have we considered the fact that Ruan simply wanted one of those world-renowed Nani massages? pic.twitter.com/MMbrp4SQyT

Nani trying the Mr Miyagi hand trick to somehow heal Ruan and absolve him of the red card. pic.twitter.com/bRDSq3cs4R

Fortunately, VAR was there to save the day, helping the official show Ruan a straight red card for his bullshit. Mackay-Steven was shown yellow and was fortunate Ruan’s kick mostly hit his thigh.

Admittedly, Ruan could’ve been sent off earlier in the match, when he smashed into Anton Tinnerholm.

Not even looking at the ball. pic.twitter.com/yBG7h8oVp0

Hilariously, a wheelchair was brought out for Ruan as he exited the pitch, the entire Orlando City team going all-in with the lies like they’re the Trump administration. 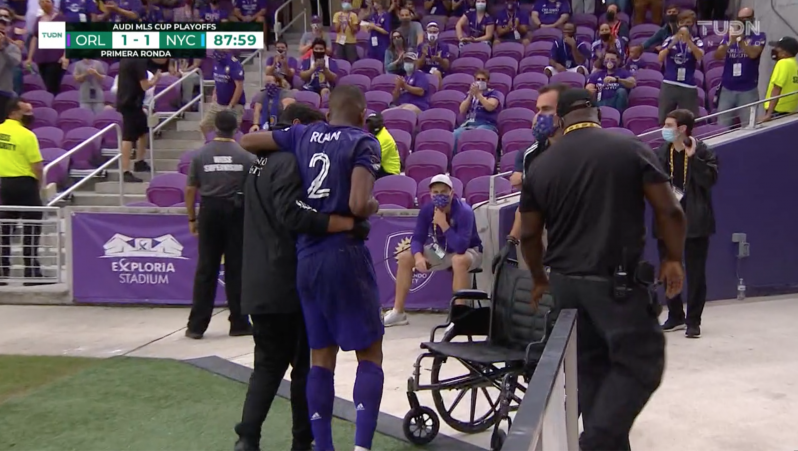 After 10 minutes of stoppage time and 30 minutes of extra time, the match went to penalties, at which point everyone turned the match off to watch Barcelona vs. Atlético Madrid. Just kidding, we half watched the shootout, which was batshit crazy and will get its own post later today.