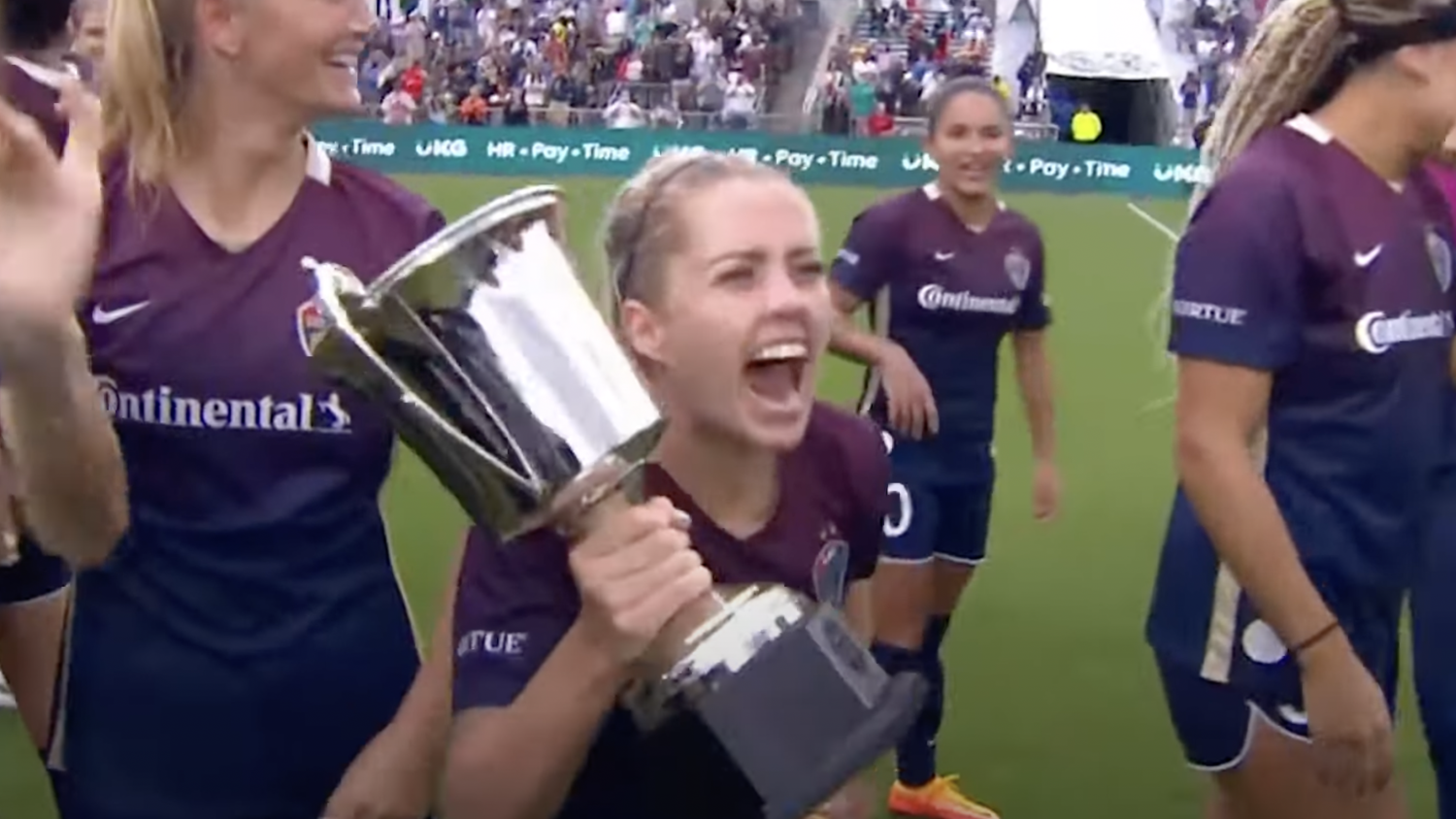 The N.C. Courage claimed the first trophy of the season beating the Spirit 2-1 in an unusual match.
Attacking Third | YouTube

One of the NWSL’s budding stars hobbled off after a shocking challenge that went unpunished. A USWNT keeper’s head clanged awkwardly off the post. A fan favorite appeared to have a seizure on the pitch.

The North Carolina Courage edged the Washington Spirit 2-1 to claim the NWSL Challenge Cup trophy on Saturday in Cary, North Carolina, but the final score was one of the last things anyone was talking about after the match.

A 70th-minute own goal was all that separated the Courage and Spirit on Saturday after the two played to two 2-2 draws earlier in the season. North Carolina, playing at home, fully deserved the win, but no one could have predicted how it all played out.

Finding it hard to talk about the soccer at the moment.

It's starting to feel like not having VAR in #NWSL is legitimately dangerous to these players. The number of horrific challenges to not even receive a yellow card is concerning. #NWSLChallengeCup

There have been a lot of elements of this Challenge Cup final that pretty clearly illustrate how the #NWSL continues to fail its players.

With a $10,000 prize on the line for players — a tenfold increase from last year — both teams were flying into challenges and flying toward goal from the start.

In the 10th minute, the first good chance fell to Ashley Hatch after a stellar move that included the other two members of the Spirit’s attacking trident, Ashley Sanchez and Trinity Rodman. Hatch’s effort was saved by Katelyn Rowland, and the Courage immediately went the other way, with Debinha playing in Kerolin for the opener.

Kerolin had yet to record an assist or goal in five appearances this season, but anyone who watched her play knew goals were coming. The dynamic 22-year-old Brazilian has been a revelation since joining the Courage earlier this year.

In the 13th minute, Kerolin again caused problems for the Spirit defenders, dancing into the box before playing a ball across that forced a majestic save from Aubrey Kingsbury to deny Emily Gray.

Courage No. 10 Debinha hit the post five minutes later and Washington defender Emily Sonnett probably got away with a hand ball in the box, but the Spirit eventually found ways to get their attackers into the match, with Rodman getting off two shots in the 30th minute. By the 35th minute, they had their equalizer.

Rodman played a perfectly weighted through ball to Hatch, who scored her sixth goal of the Challenge Cup and seventh in the last seven matches against the Courage.

In the second half, the Courage found the winner, eventually.

Kerolin looked to be through on goal until Sam Staab came to the rescue with a late challenge. Replays showed Staab went through Kerolin’s leg in what should have been a red card and a penalty kick for an ugly tackle. Instead, only a corner kick was awarded, and Courage fullback Merritt Mathias was shown yellow for arguing the call.

(The NWSL highlights above refused to show other angles of the tackle, which showed the call on the pitch was clearly the incorrect one.)

Because the NWSL does not use a VAR, no video replay could overturn the call.

I think VAR is lame and even I, every time I watch the #NWSL, am like, "Wow, the NWSL really needs VAR." The refereeing is just so terrible. https://t.co/PAvfVGf7Og

While belief in karma is just wishful thinking, karma sure seemed to be real in the ensuing moments.

Moments after Staab’s shocking challenge on Kerolin in the box went ignored, the Courage scored the match winner on the ensuing corner kick. The final touch came off Taylor Aylmer for an own goal, and goalkeeper Aubrey Kingsbury had her head bang off the post in the scramble to keep it out.

It's a BIG response from @TheNCCourage to restore the lead! ⚽️

Despite the Spirit pouring forward in search of an equalizer, none was coming despite more than 11 minutes of stoppage time. The lengthy added time was in part due to the injuries to Kerolin and Kingsbury, but also a scary head injury suffered in stoppage time by Jordan Baggett (formerly Jordan DiBiasi). The Spirit midfielder appeared to have a seizure after a hard challenge.

Amazingly, Washington players had to take it upon themselves to sprint the medical stretcher over to help their teammate as the medical professionals were too casual walking over.

Spirit players literally ran over and grabbed the stretcher because they weren’t moving fast enough. This is after players, coaches and refs are whistling, yelling and waving for the medical crew. pic.twitter.com/dr8geInwmN

Baggett appeared to smile as she was carted off the field.

After a collision on the field Jordan Baggett has been carted off.

On Kingsbury: Ward said she's going to get checked out now, "we'll take a look now just to see if there's any delayed onset of symptoms or anything." Said trainers did a thorough check and she was responsive during tests on the field. #NWSL

Despite her leg injury, Kerolin was able to celebrate the title, jumping around with teammates when she was named Challenge Cup final MVP. Fellow Brazilian Debinha provided some quick translating for the postmatch interview.

Now attention turns to the NWSL regular season, which is already in Week 2. And at least a few players are already wondering when the NWSL Shield, arguably the hardest trophy to win in the league, will be rewarded as well as a preseason tournament.

yup! I’ve beeeen saying this too… no respect is shown towards Shield Winners even though its the hardest thing to do in our league…‍♀️ https://t.co/new93DMNaj