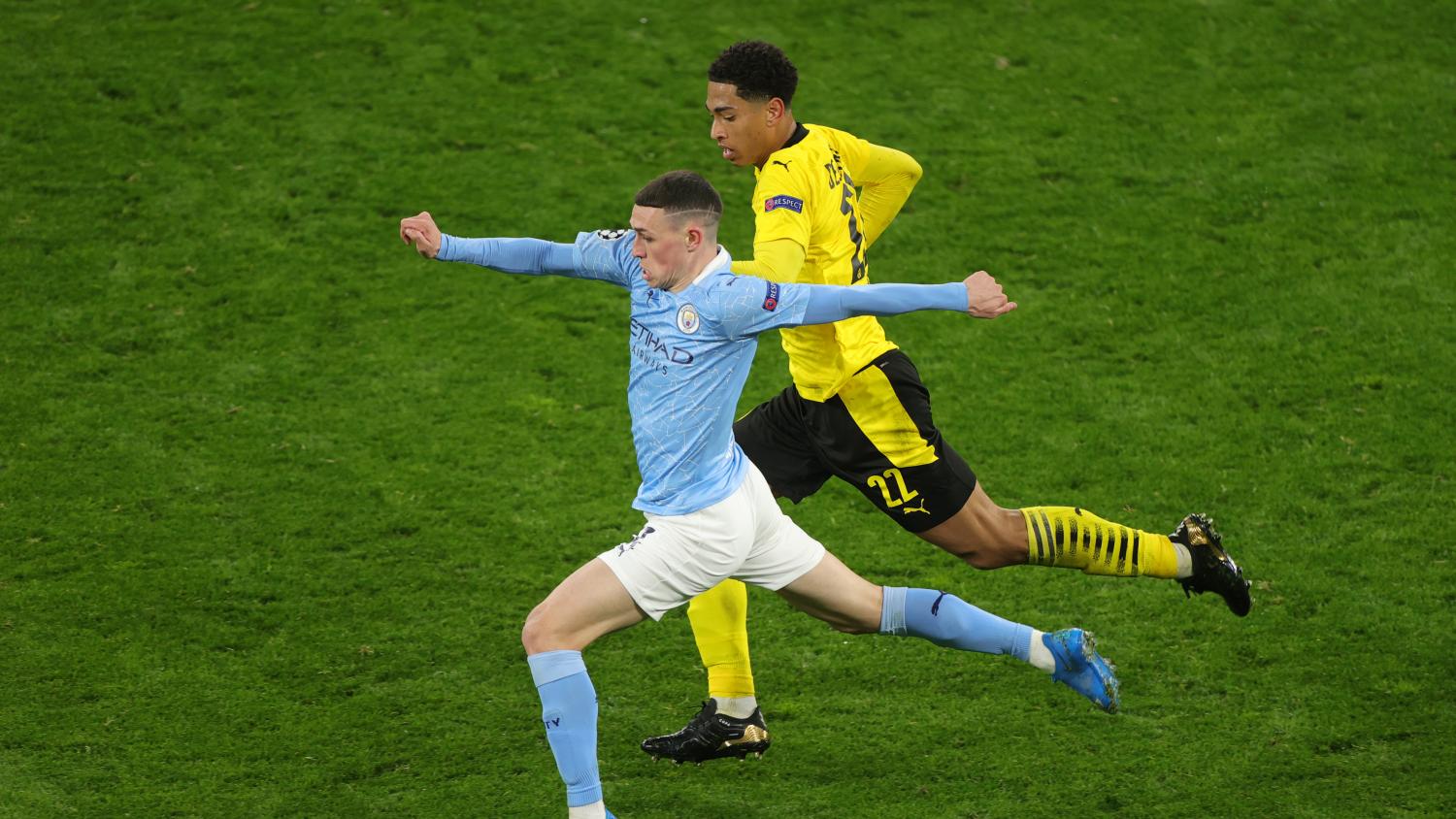 Borussia Dortmund’s Edin Terzić and Manchester City’s Pep Guardiola promised not to sit on any advantage in Wednesday’s Champions League quarterfinal second leg at Signal Iduna Park, but both were alternately guilty of doing just that in a tumultuous match that was ultimately decided by two second-half goals from the Premier League champion-elect.

The opening 15 minutes of the match saw both Dortmund and City taking time to string together some neat spells of possession inside their own respective halves without generating any real threat.

But with the first deep ball over the top of City’s defense, Dortmund made it 2-2 on aggregate with the away goal advantage. It was Emre Can who released Erling Haaland for his only memorable contribution of the match, which was to control possession before teeing up Mahmoud Dahoud for a shot.

His attempt was blocked, but the deflection fell to the 17-year-old Bellingham centrally, and the teenager curled an effort towards the corner that Ederson got a hand to but couldn’t keep out. Bellingham’s now the youngest Champions League scorer in Dortmund history, taking the record from Christian Pulisic. (Nooo!)

However, City’s response was emphatic, and you could tell that Dortmund was already suffering with trying to beat back the away side’s advances while balancing a dire need to launch its own attacks to ease the growing one-way pressure.

There wasn’t any notion of Guardiola “overthinking” this one despite Kevin De Bruyne’s deployment as a false nine. The Belgian played some sweet stuff in the opening 45, including this thunderous effort that crashed off the crossbar.

Bellingham again came up big before the halftime whistle when clearing a goal-bound effort from Riyad Mahrez off the line after it’d gotten beyond keeper Marwin Hitz.

Jude Bellingham coming up clutch on the both ends of the field. pic.twitter.com/f6nIW0qZcU

The explanation for Dortmund’s halftime advantage was that Bellingham, Can and Dahoud had outplayed their heralded midfield counterparts of Bernardo Silva, Rodri and İlkay Gündoğan.

Gündoğan has spent the entire season personifying the Cyberdyne Systems Model 101 Terminator, but Bellingham was Sarah Connor out there.

Jude Bellingham's first half by numbers vs. Man City:

After that fascinating first half, City’s equalizer — from a neutral’s perspective — was something of a letdown. Can, while stooping awkwardly for a defensive header inside his own area, only managed to direct his clearance onto his own arm.

While the act of heading the ball against one’s own arm can be grounds for dismissing a penalty, there’s still the interpretation of a player making themselves unnaturally bigger while doing as much, and that’s what Can was guilty of.

Mahrez took the penalty and although Hitz guessed the direction, the Algerian struck it venomously to ensure the keeper couldn’t get there in time.

RIYAD MAHREZ. FROM THE SPOT. pic.twitter.com/phNSBF7EXA

The goal was deflating from a Dortmund perspective, and before any sort of real response could be mustered, Phil Foden cracked a left-footed drive from 20 yards out that went in off the right upright.

The young Englishman had a masterful game, completing 92 percent of his 51 passes — including three that led to chances for City — two dribbles and two tackles.

City hadn’t advanced beyond the quarterfinals in Guardiola’s four previous seasons, and dispelling those demons this campaign was always going to be an almighty struggle. But like Spain’s quarterfinal shootout victory over Italy at Euro 2008, maybe this win signals the end of the hurt and the beginning of a new era of European dominance.

City meets PSG in the semifinals with the first leg scheduled for April 27-28 and the second on May 4-5.