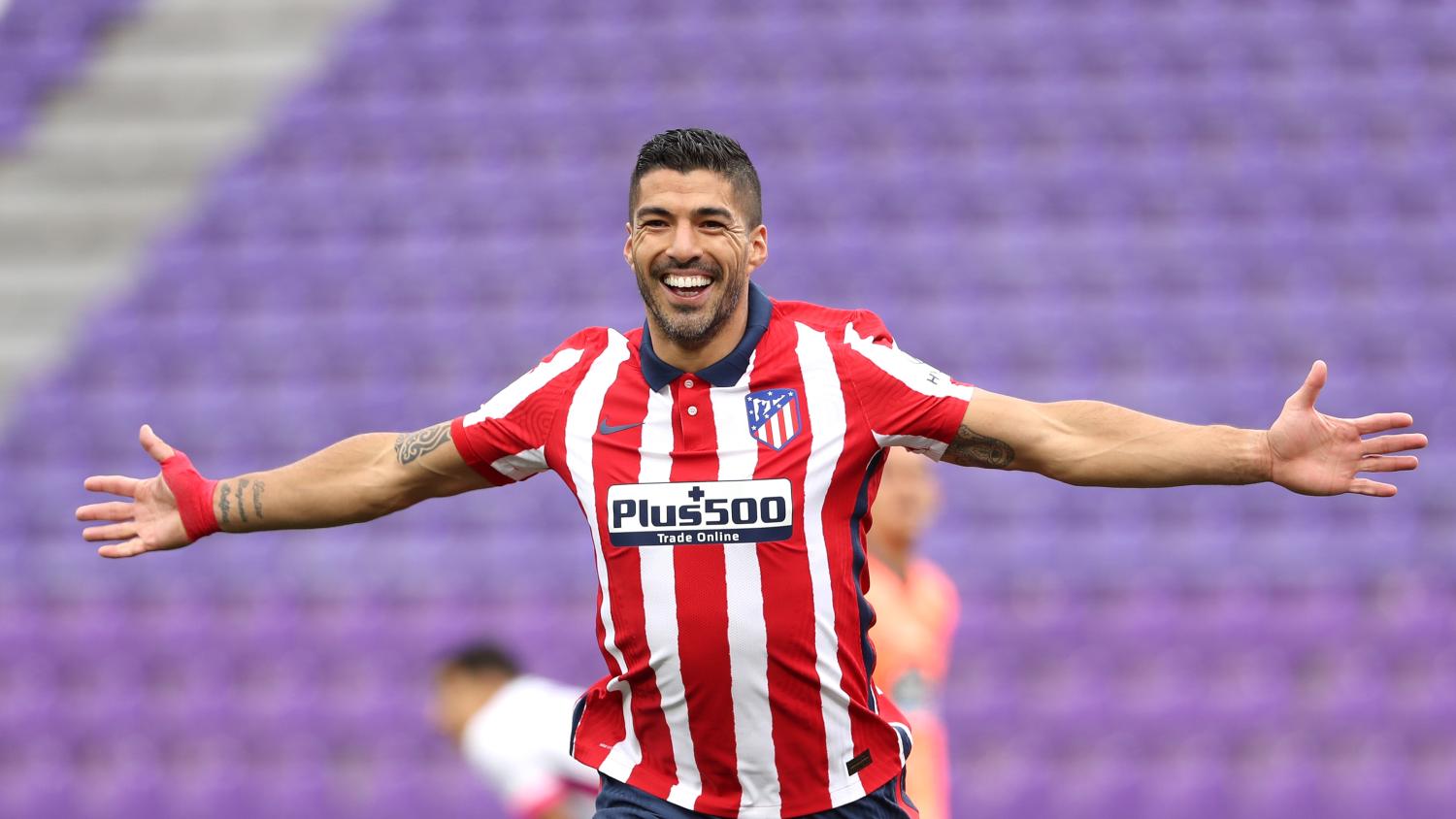 Luis Suárez scored the goal that clinched the LaLiga title for Atlético Madrid, while his former club finished a disappointing third.
Getty Images

Let’s just go ahead and say it: Barcelona made the dumbest transfer of the year — maybe ever? — when it sold Luis Suárez to join rival Atlético Madid for the paltry fee of $7.7 million. Suárez, who won four league titles with Barça, left the the club in tears in September but ended the season with the the biggest, toothiest smile in Spain. The divisive Uruguayan lifted yet another LaLiga trophy on Saturday, scoring the winner to propel Atleti to the top of Spain for the first time since 2014.

Suárez led Atlético with 21 league goals to help Diego Simeone’s side edge Real Madrid for the league crown with a 2-1 win over Valladolid on Saturday. Real’s 2-1 win over Villarreal was thus irrelevant to the title race as Los Blancos finished two points behind their city rivals. Barcelona finished a distant third after a 1-0 win over Eibar, ultimately unable to keep up with the Madrid clubs with no elite striker on the entire squad.

On the final match day of the season, the league title was still very much in the balance. Atlético Madrid entered Saturday with a two-point lead over Real Madrid, which owned the tiebreaker over its city rival. Zinedine Zidane’s side would claim the title with a win and an Atleti draw or defeat. Barcelona, meanwhile, had fallen off the pace and even allowed Lionel Messi to miss the game to prepare for this summer’s Copa América.

It wasn’t going to be easy for either team. Atleti was playing at Valladolid, owned by former Real Madrid star Ronaldo (the Brazilian), which was playing for its survival in LaLiga. Real was hosting Villarreal, which plays in the Europa League final on Wednesday.

There was plenty of drama on the final day. The first goal Saturday came via a lethal counterattack finished off by Valladolid’s Óscar Plano, putting the league leaders behind in the 18th minute.

The goal meant Real just needed a goal to take the lead atop the LaLiga live table.

Moments after Real Madrid players learned of Atleti going behind, Los Blancos went behind. Yeremi Pino provided a bit of individual brilliance to fire Villarreal into the lead.

Moments after the @realmadrid bench find out Atleti has given up a goal, YEREMI PINO scores for @Eng_Villarreal!#RealMadridVillarreal on beIN SPORTS pic.twitter.com/dBilmAfCFe

With both league leaders trailing at half, Atlético was still on track to win the title. Diego Simeone’s side added to that edge 12 minutes into the second half when Ángel Correa somehow dribbled past a couple defenders before scoring a 20-yard toe-poke. The goal came two minutes after a Karim Benzema goal was called back for offside.

Still, a draw wouldn’t be enough if Real Madrid could beat Villarreal. And it looked like Real would get back in the match after keeper Gerónimo Rulli’s shocking giveaway presented Karim Benzema a golden opportunity. Somehow, the striker just recalled to the France squad squandered the chance.

Rodrygo never gave up and Benzema's attempt was SO CLOSE! #RealMadridVillarreal ONLY on beIN SPORTS pic.twitter.com/S8O69zVxi9

Moments after Benzema’s miss, Suárez capped his season with the go-ahead goal against Valladolid. The former Barcelona star pounced on a miserable back pass and was never going to miss one-on-one with the keeper with the title on the line.

The Uruguayan striker makes no mistake with his goal as he gives Atletico Madrid a 2-1 lead over Real Valladolid and can that be enough to decide the LaLiga title?#RealValladolidAtleti LIVE NOW ⬇️
CONNECT 4 https://t.co/LRYa03w6yI pic.twitter.com/NR7L63ttEJ

The goal sealed a 2-1 win and clinched the LaLiga championship for Suárez, which must have been unbelievably validating after being told he was not part of Ronald Koeman’s plans at Barcelona at the start of the season.

But the final day was not without a little late drama.

Benzema eventually found his goal in the 87th minute and Luka Modrić gave Real a late winner with a superb volley.

⚪️⚪️ @realmadrid keeping up the fight! KARIM BENZEMA with a class finish to make it 1-1 against @Eng_Villarreal.#RealMadridVillarreal on beIN SPORTS pic.twitter.com/UiFme71EH4

The goals were immaterial to the title race, as los Colchoneros held on to win and lift the trophy.

One wonders how the league might have played out had Suárez stayed at the Catalan club, and in my opinion it’s a fairly easy guess to say Barcelona would be celebrating today had he not been sold.

Real Madrid, meanwhile, finished the season without any sort of consolation. Real is one of the few clubs expected to win a league or European championship every year, but both fell out of the team’s grasp.

Congratulations to @atletienglish and their fans on winning the 2020/21 LaLiga title.#RealMadrid

But what a final day of action it all was. (Technically two matches remain on Sunday, but neither will impact the title race, European charge or relegation battle.)

The simultaneous matches Saturday were originally scheduled for Sunday evening in Spain but moved to Saturday to allow Villarreal more time to prepare for the Europa League final against Manchester United on Wednesday. The LaLiga matches were played a bit earlier than usual so as to avoid conflict with the popular Eurovision Song Contest TV show later Saturday night. Eurovision draws 200 million viewers worldwide.