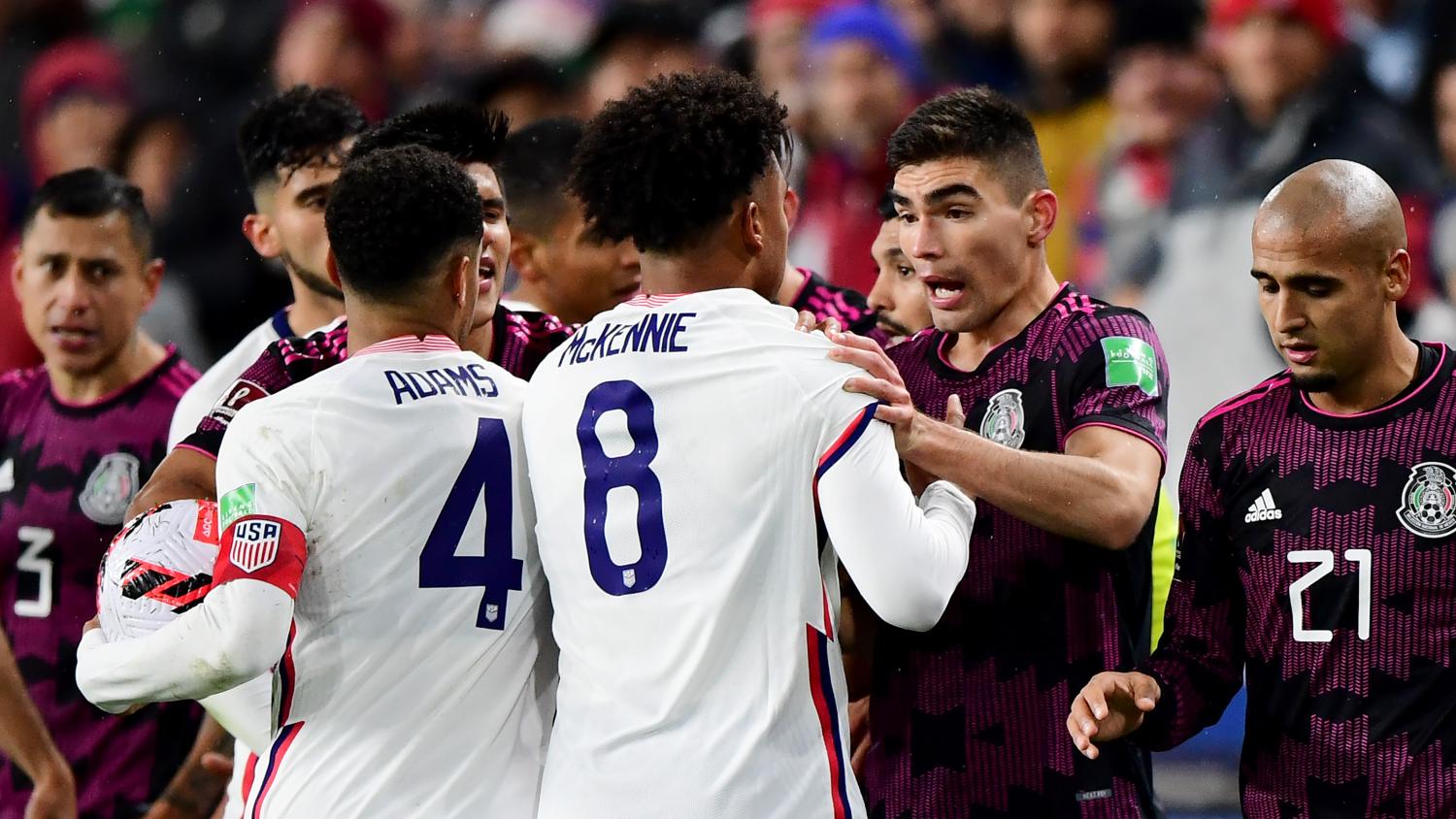 Our viewing guide on how to watch USA Mexico World Cup qualifier, whether you want to watch on TV or streaming.
Getty Images

The USMNT and Mexico have played each other more than any other country in the world, but there are two meetings every four years that stand out above every other match between the old foes. For as often as the teams face off in finals and friendlies, it’s the World Cup qualifiers that tend to bring out the fiercest moments in this rivalry. Here’s everything you need to know about how to watch USA Mexico World Cup qualifying match scheduled for Thursday, March 24, at the Azteca Stadium in Mexico City.

We’ve already covered how to watch USMNT World Cup qualifiers in the past but felt it necessary to give the USA-Mexico match extra attention given just how impactful the match will be. To read how to watch other USMNT qualifiers, click here.

The U.S. and Mexico met three times last year, the Americans winning all three. The USMNT beat El Tri 3-2 in the Concacaf Nations League final in Denver, 1-0 in the Gold Cup final in Las Vegas and 2-0 in the first World Cup qualifier in Cincinnati, Ohio. With three matches left in Concacaf World Cup qualifying, this final showdown is one of the biggest in years as both nations still have work to do to book their trip to Qatar in November.

For those on the East Coast, the USA Mexico World Cup qualifier will be a late kickoff, so maybe plan accordingly for work plans on Friday morning. Pregame starts at 8:30 p.m. ET on CBS Sports Network, 90 minutes before the match begins. The postgame show, also on CBSSN, will run for 30 minutes after midnight.

For English viewers on CBSSN, Kate Abdo will head the desk for the studio show alongside analysts Clint Dempsey, Oguchi Onyewu and Charlie Davies. The match will be called by play-by-play man Andres Cordero and analyst Maurice Edu, who will both be on site, a rarity for CBS announcers. Additionally, CBS’s Jenny Chiu and Mexico women’s national team player Janelly Farías will be sideline reporters at the Azteca.

Host Alejandro Berry will lead the coverage on Univision and TUDN starting at 9 p.m. ET. Jose Luis López Salido and Pablo Ramírez will be the play-by-play men with analysts Marcelo Balboa and Jesús Bracamontes. Gibran Araige and Gina Olguin will be reporting from the scene.

The other matches in Concacaf on March 24 will be available streaming on Paramount+ in English. Jamaica and El Salvador kick off at 8 p.m. ET followed by Panama and Honduras at 9:05 p.m. ET and finally Costa Rica and Canada five minutes after the USA-Mexico game kicks off, 10:05 p.m. ET.

Now that you know how, here’s why you absolutely must watch the USMNT travel to the heart of Mexico to play its most bitter rival in a vital World Cup qualifier, as if that sentence alone isn’t enough.

With three matches left, both the U.S. and Mexico are in decent position to qualify for the World Cup. Canada tops the group with 25 points while the USMNT and El Tri are four points back with 21, the Americans in second on goal difference. Panama and Costa Rica are hot on their tails for the three automatic berths. The fourth-place finisher will go to a single-match intercontinental playoff against the best team from Oceania (probably New Zealand).

Currently, the U.S. goes into the final three qualifiers knowing six points will definitely be enough, while three points will likely be enough. If the USMNT beats Panama at home on March 27, then it’s all but assured the Americans will be in Qatar.

Mexico is in a similar position, but also knows it finishes qualifying against two already eliminated teams: at Honduras and home to El Salvador. In contrast, the Americans must host a desperate Panama before finishing against what is likely to be an even more desperate Costa Rica, a team the U.S. has never beaten on the road in World Cup qualifying.

A draw would probably suit both teams nicely, but considering the U.S. added another Dos a Cero to the record books in November, El Tri will be out for revenge.

What makes this match all the more intriguing is that it’s likely the last meaningful World Cup qualifier between the two. Next World Cup, the teams will qualify automatically as co-hosts (along with Canada). Following that, with the World Cup increased to 48 teams, qualifying will not be as difficult, at least in theory, as there will be more leeway as more teams from Concacaf are admitted.

In the last World Cup qualifying cycle, El Tri beat the U.S. 2-1 in Columbus, Ohio, while the USA-Mexico World Cup qualifier at the Azteca in Mexico City ended 1-1 thanks to that Michael Bradley goal.

The USA-Panama match will be broadcast on FS1, UniMás and TUDN on March 27. The final U.S. qualifier, against Los Ticos, will be available on Paramount+ and Universo; all four Concacaf matches that day kick off at the same time (9:05 p.m. ET), with Paramount+ offering all of them. CBS has not said if it will air the USA-Costa Rica match, instead saying it will televise on CBSSN “one of the final qualifying matches” to be determined based on which teams are in, which basically means if the U.S. isn’t already qualified, the match will be on CBSSN.