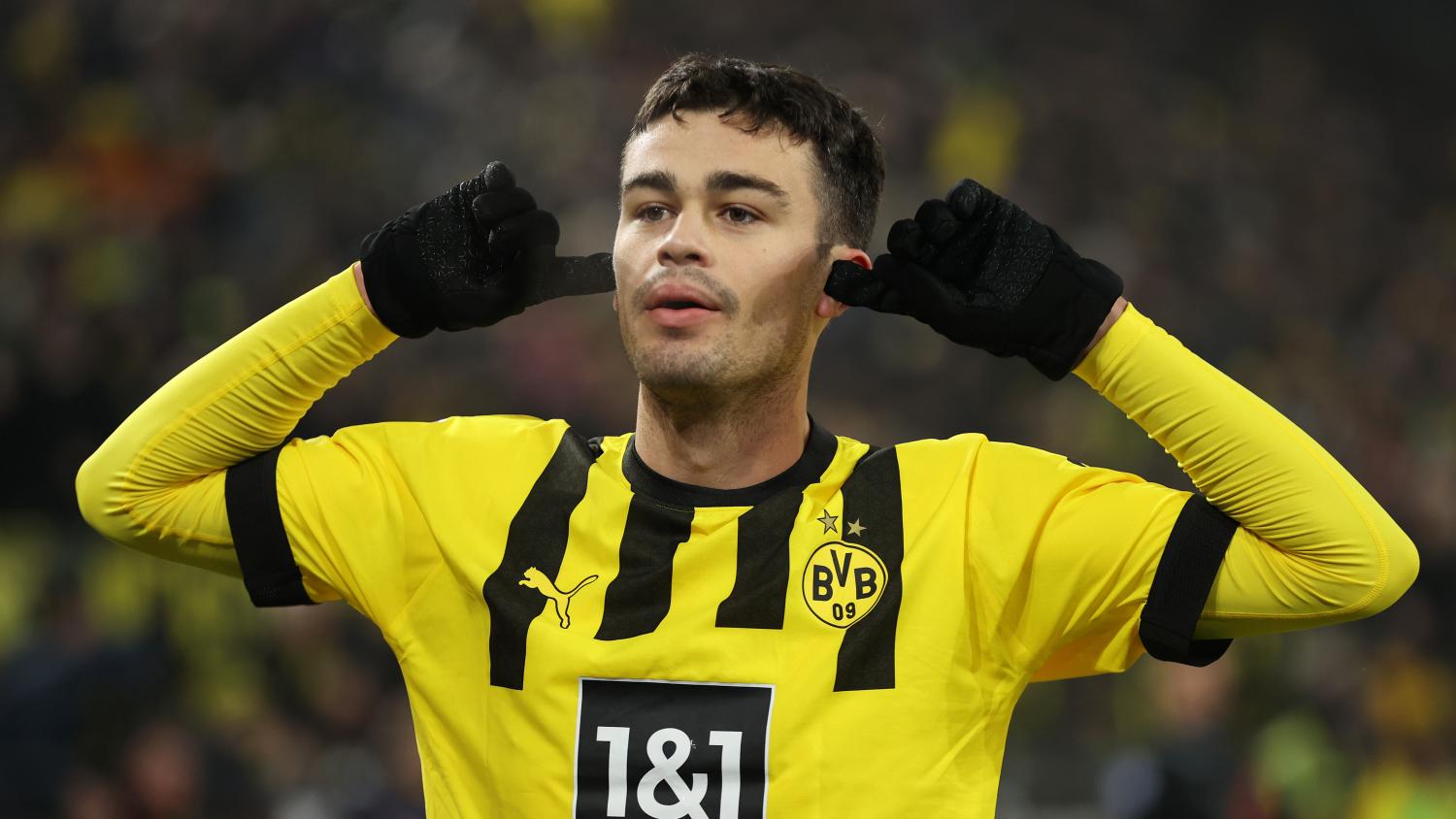 Reyna came off the bench in the 70th and decided the 4-3 barn burner.
Getty Images

Borussia Dortmund returned to competitive action in the Bundesliga on Sunday following a 73-day World Cup layoff, although Giovanni Reyna's quest for a first start was denied with manager Edin Terzić preferring Julian Brandt at attacking mid, Donyell Malen on the left and Karim Adeyemi on the right against Augsburg.

That didn't stop ESPN+ from running an entire pregame segment, complete with a "Timeline of Gregg Berhalter, Reyna family incidents," in which Alejandro Moreno broke it all down for the millionth time before ending, as every single writer/analyst/expert always does, with some variant of "Reyna needs to do his talking on the pitch." Maybe if we'd just let him...

So American viewers had their eye on the bench at Signal Iduna Park, where Sébastien Haller also made a triumphant return after his battle with testicular cancer, and there were other fascinating storylines coming out of Dortmund, including a start for striker Youssoufa Moukoko after the 18-year-old prodigy finally dispelled transfer rumors by signing a two-year extension.

There was also a place for precociously talented 19-year-old midfielder Jude Bellingham. Real Madrid, Manchester City, Liverpool and Manchester United are all circling as the Englishman is reportedly set to reject BVB's offer to make him the club's highest-paid player.

This was also a chance for Dortmund to move within seven points of Bayern Munich at the top whereas any positive result would be massive for Augsburg in the fight for survival. Augsburg keeper Rafał Gikiewicz embodied that all-or-nothing approach in the 18th minute by saving one with his face.

In the 29th, it was the irresistible Bellingham who minced Augsburg's Arne Engels on the edge of the area by dipping a shoulder, feinting one direction, cutting another and lashing a drive off the inside of the near post and in. There's no doubt he'll be on of the five most expensive transfers of all time.

Augsburg got an equalizer in the 40th-minute thanks to some classic Borussia Dortmund defending, Nico Shlotterbeck restored Dortmund's advantage in the 42nd with an unmarked header off a set piece, and then Augsburg leveled again at 45+1' with the home side's defense all over the place.

In the second 45, Haller was officially back at it in the 62nd minute as the crowd welcomed his introduction with a standing ovation.

So with the score level at 2-2 and Reyna's mom possibly growing quite angry, the American hopped off the bench in the 70th minute. Derek Rae emphasized that Dortmund had never had a problem with the enfant terrible as he replaced Adeyemi on the right flank.

In the 75th, it was the substitute who entered alongside Reyna, 18-year-old Englishman Jamie Bynoe-Gittens, who put Dortmund up 3-2 with a sensational display of his talent. Comically, it took Augsburg a minute to equalize.

All of a minute later, Reyna scored the best goal of his young career to make it 4-3. It's a right-footed piece of perfection. My word.

GIO REYNA GOLAZO TO GIVE DORTMUND A 4-3 LEAD! pic.twitter.com/3PpTXUV2q6

Augsburg should've made it 4-4 in the 89th but blazed an effort over the crossbar. Reyna came close to getting a second, but ultimately his wonder goal decided the contest.

I think he's earned a start against Mainz on Wednesday.