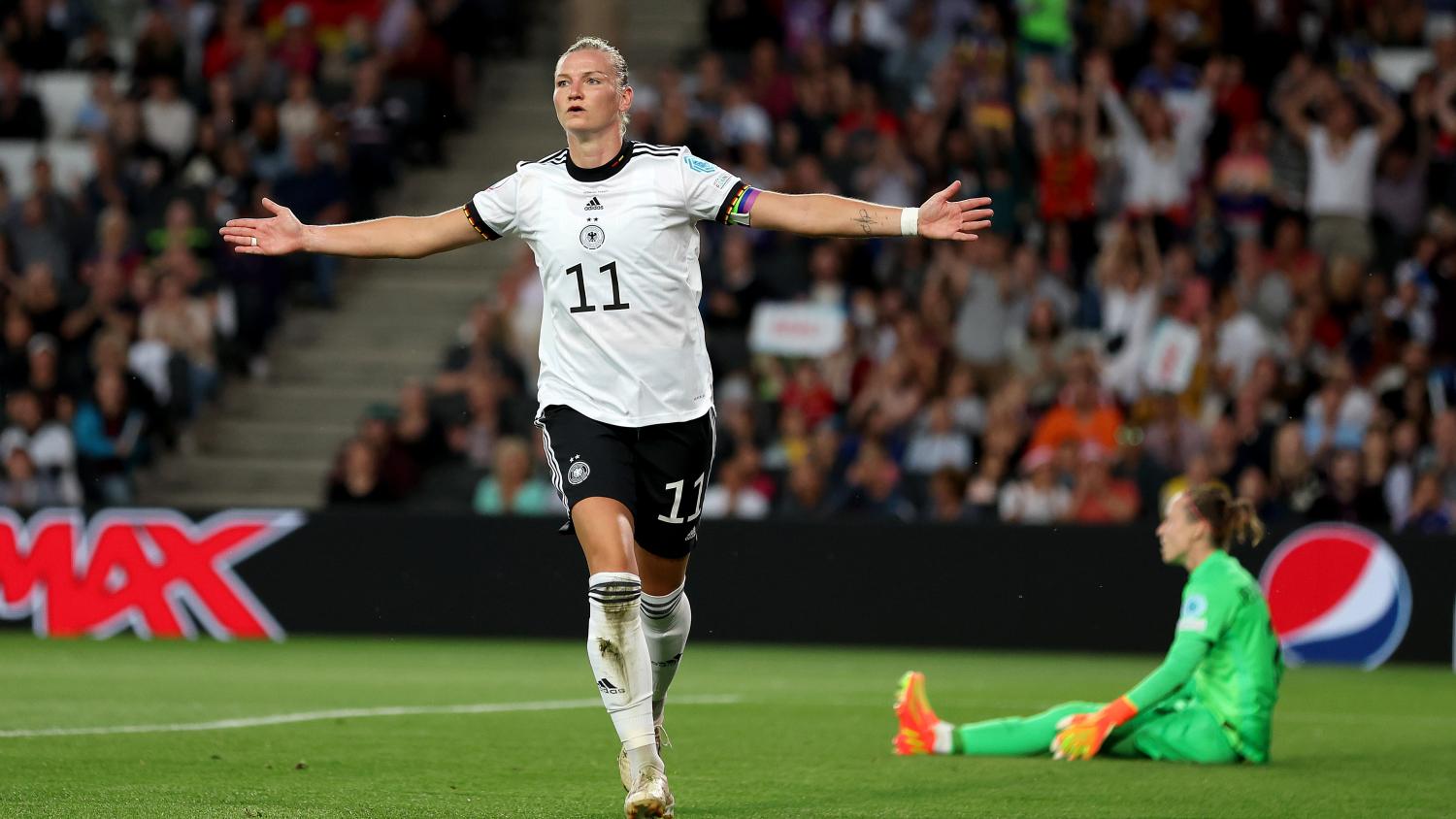 Germany heads to its ninth final. The Germans have won their previous eight.
Getty Images

Only three things are guaranteed in this life: death, taxes and Alexandra Popp scoring for Germany in the 2022 Euros.

Popp broke French hearts on Wednesday as she booked Germany’s spot in the 2022 UEFA Women’s Euro final with a brace to defeat France 2-1. Popp has scored in all five of Germany’s games this tournament with her goal tally at six.

Alexandra Popp has now scored in FIVE straight matches at the Women's Euros tying Michel Platini's record for France which he set in 1984 at the Men's Euros pic.twitter.com/OlMUBXmyQG

The 31-year-old Wolfsburg striker wasn’t playing around on Wednesday against France with two high-quality goals to get the job done.

Germany clinched its ninth Euro final with the victory, but France didn’t make it easy for the Germans. The game was back-and-forth and evenly matched throughout the 90 minutes.

The first big chance came to Germany when Popp hit a thunderous free kick in the 22nd minute, but Pauline Peyraud-Magnin came to France’s rescue.

Popp wouldn’t be denied so easily, and 17 minutes later she scored the game’s opener with a powerful volley from close range. No goalkeeper was stopping this one.

She has scored in every single game this tournament pic.twitter.com/cRUlG0Q5iv

After conceding the goal, French captain Wendie Renard gathered her team in a huddle. It’s not known what she said, but whatever it was, it fired up her side to find an equalizer seconds before halftime.

Moments before the half, Kadidiatou Diani hit a shot so fast it would’ve been pulled over if it was in a school zone. The shot careened off the post and then off the back of Merle Frohms to put France back on equal terms.

The second half was anyone’s game with both sides seeing great scoring chances. Frohms made up for her own goal with an important save denying a Renard header from point-blank range.

With 15 minutes until the 90, Popp called game. Last-ditch defending from France initially denied the Germans a goal scoring chance, but a second ball delivered into the box was hunted down by Popp, who scored with a towering header.

ALEXANDRA POPP DOES IT AGAIN!

Germany lead over France in the semifinal pic.twitter.com/6sTOB4LjAM

France desperately searched for an equalizer but was unable to breach the German defense.

Wednesday's semifinal result sees a glorious final for neutrals as the two best teams in the tournament, Germany and England, will duke it out at Wembley Stadium for the trophy.

The final is on Sunday at noon ET and will be played in front of a packed house. Wembley Stadium sold out in 43 minutes as England fans will finally see if football is coming home or if Germany will win its ninth title.