Only The Obscene Stupidity Of VAR Can Stop Erling Haaland Now

Connor Fleming March 9, 2021
The Norwegian is averaging one goal every 54 minutes in the Champions League. That makes no sense.

Picture this: The 81,365 capacity Westfalenstadion is rocking after Erling Haaland has given Borussia Dortmund a 4-2 aggregate lead over Sevilla in their Champions League Round of 16 second leg. In the 54th minute, Haaland tears the roof off the place after bodying Fernando to the floor, recollecting possession and clipping a right-footed effort over Bono from an obtuse angle.

It’s an awe-inspiring goal, combining strength, technique and a borderline unhealthy obsession with sticking the ball in the back of the net.

But suddenly the referee is trotting over to the monitor. He must be looking at Haaland’s violence on Fernando, but he’s not. He’s looking at a moment from a minute before when Jules Koundé dragged down Haaland in the area when attempting to meet a cross.

The commentators on CBS Sports have zero clue what’s happening. The Sevilla and Dortmund players are in the same camp. The ref turns, waves his hands around and points to the spot. The goal is chalked off; Borussia Dortmund is awarded a penalty.

This is the one moment in time that an empty stadium seems entirely appropriate. You can imagine that the sound of silence would’ve been the exact same with over 80,000 in the ground. How in the hell was anyone supposed to know what was happening? And why exactly did it happen?

Our thoughts are with the writers who had to provide live updates of the game.

Bono initially saved the penalty and then saved Haaland’s follow-up attempt, but the celebrations were short-lived. Again the VAR intervened, this time to show that Bono had advanced off his line before the stop. The penalty was retaken and it was finally, rightfully, 2-0. 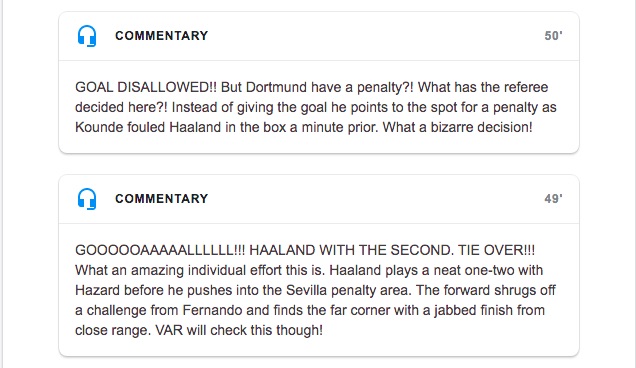 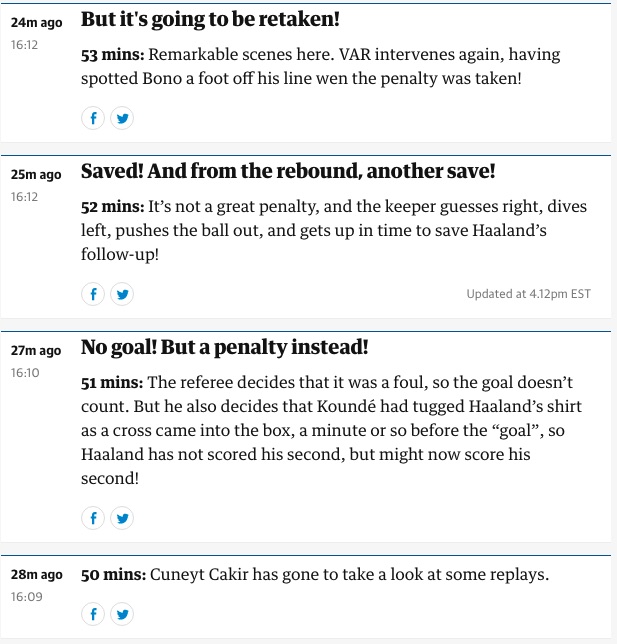 The Guardian's minute-by-minute tries to keep up.

Honestly not really sure how to describe what happened, but we're up 2-0!

Haaland scores. Ref goes to VAR. Disallows the goal and gives Dortmund a penalty for an earlier passage of play. Haaland misses the penalty. Retaken for keeper coming off his line. Haaland scores penalty.

Genuinely, (and I’m not necessarily saying 100% just ditch it) at what point is there a discussion among those who actually decided about whether VAR is something that maybe we’d be better off with out? There seems to be this “can’t turn back now” attitude but....why not?

I’ve been a big proponent of “at the end of the day, VAR gets things right, so what’s the big deal?” but I definitely don’t feel that way about this whole sequence. The feeling I get is that this is a complete joke, and it would be a total farce with fans inside the stadium.

With his brace today, Haaland has reached 20 Champions League goals in just 14 appearances. He’s the youngest to ever reach that milestone, and it took him less games than anyone in history (Harry Kane reached it in 24 matches). The most obscene statistic is that he’s reached 20 goals in 1,080 minutes of UCL play, which equates to one goal every 54 minutes.

Here was his first, which arrived entirely against the run of play in the 35th minute (the Norwegian had less than 10 touches at the time). The through ball from Mahmoud Dahoud was particularly tasty.

Sevilla’s ability to comeback and draw 2-2 — they even had a good opportunity to make it 5-5 on aggregate at the death — tells you everything about the difference between these two sides: Erling Haaland.