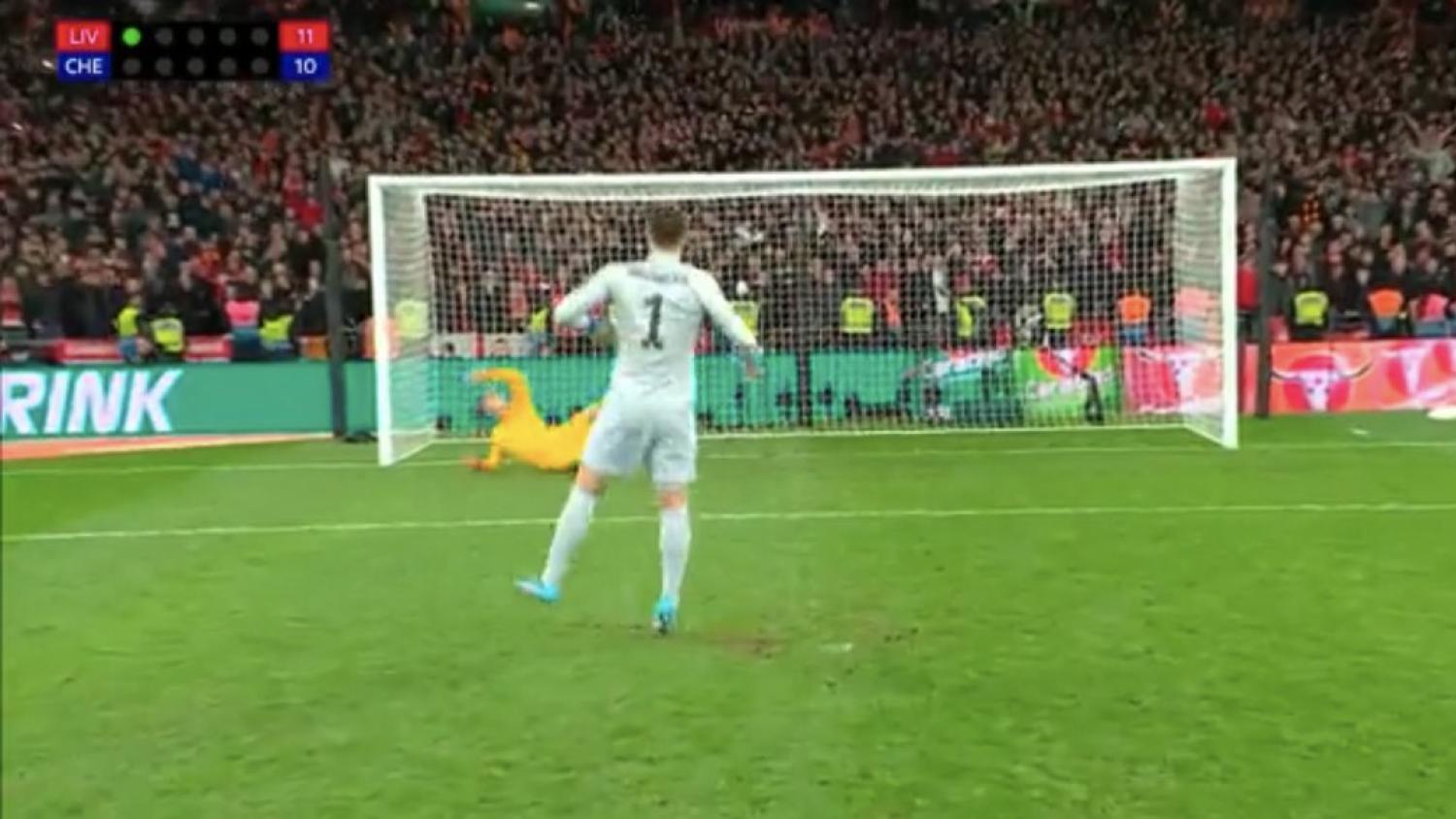 When anyone starts talking about that infamous Kepa Arrizabalaga Carabao Cup final moment, the reply is now going to have to be "which one?"

In 2019, Kepa gave us the unforgettable scene of refusing to be substituted for penalty specialist Willy Caballero near the end of extra time. The Spaniard saved one but Chelsea ultimately still lost to Manchester City.

On Sunday in the 2022 final against Liverpool, Kepa's role was reversed as he came on in the 120th minute as the penalty specialist, replacing Edouard Mendy, who'd been Man of the Match with six remarkable saves.

Mendy was unbeatable during his time on the pitch; Kepa conceded 11 straight in the shootout — including a weak effort from Ibrahima Konaté and one from Liverpool keeper Caoimhin Kelleher — before sending Chelsea's 11th attempt into orbit to end it.

It's easy to laugh at Kepa — especially with the mind games he was employing before every Liverpool attempt — but it was also a clear case of overthinking from Thomas Tuchel.

How we arrived at the shootout was just as unbelievable. In the soccer bingo card of missed opportunities, we marked everything (probably twice) except for a wasted penalty. Then we got that in the shootout.

Double saves, reaction saves, "he didn't know much about it" saves, horrendous misses, half-chances gone begging, razor-thin offside calls, VAR interventions, goal-line clearances and desperate blocks; this was one of those examples of a 0-0 serving up a hearty helping of entertainment.

Mendy was the star of the show in regular time with six stops, including two memorable double-saves and the denial of the impressive Luis Díaz.

EDOUARD MENDY IS NOT HUMAN

One of the best double saves you'll ever see. pic.twitter.com/ha6No0lxje

Mendy is playing out of this world pic.twitter.com/aX0KxXtwW2

Mohamed Salah also had one cleared off the line by Thiago Silva and a Joël Matip goal was chalked off after the VAR spotted some interference from an offside Virgil van Dijk.

At the other end, Liverpool's Carabao Cup keeper Kelleher was at his best to deny Christian Pulisic early before Mason Mount spurned two glorious chances either side of halftime with just the keeper to beat — curling one wide and hitting the post with another.

Substitute Romelu Lukaku had the ball in the back of the net in extra time, but the eagle-eyed assistant flagged him for offside and the VAR confirmed the call.

That set the stage for the shootout, where we saw all the finishing that'd been missing in open play — including a Fabinho Panenka, a bit of redemption for Lukaku and some violence from both Salah and Van Dijk.

The 23-year-old Kelleher wasn't getting close to Chelsea's attempts, but he didn't have to do anything on Kepa's effort.

Off the pitch, Chelsea manager Thomas Tuchel admitted that the club's ownership uncertainty had weighed on the team ahead of the final. Chelsea's been owned by Russian billionaire Roman Abramovich since 2003, but he announced Saturday that he was handing "stewardship and care" of Chelsea to the trustees of the club's charitable foundation.

Abramovich's statement on Saturday was widely criticized for failing to mention Russia's invasion of Ukraine — perhaps outlining his close ties with Vladimir Putin — although Chelsea released a statement Sunday saying: "The situation is Ukraine is horrific and devastating. Chelsea FC's thoughts are with everyone in Ukraine. Everyone at the club is praying for peace."

Abramovich remains Chelsea's owner but he could yet face sanctions from UK lawmakers, including the seizure of his assets and potential removal as club owner.

Reuters reported that Chelsea fans at Wembley were conflicted by Abramovich's massive influence in changing the fortunes of the club and their horror at what's unfolded in Ukraine.

"Unfortunately he didn't distance himself from Putin," one said. "He's been marvelous for our club. I just wish he had condemned it."

But this one's ultimately for Liverpool, and it's a record-setting ninth EFL Cup for the Reds. Manchester City is second with eight while Chelsea remains joint-third with five.