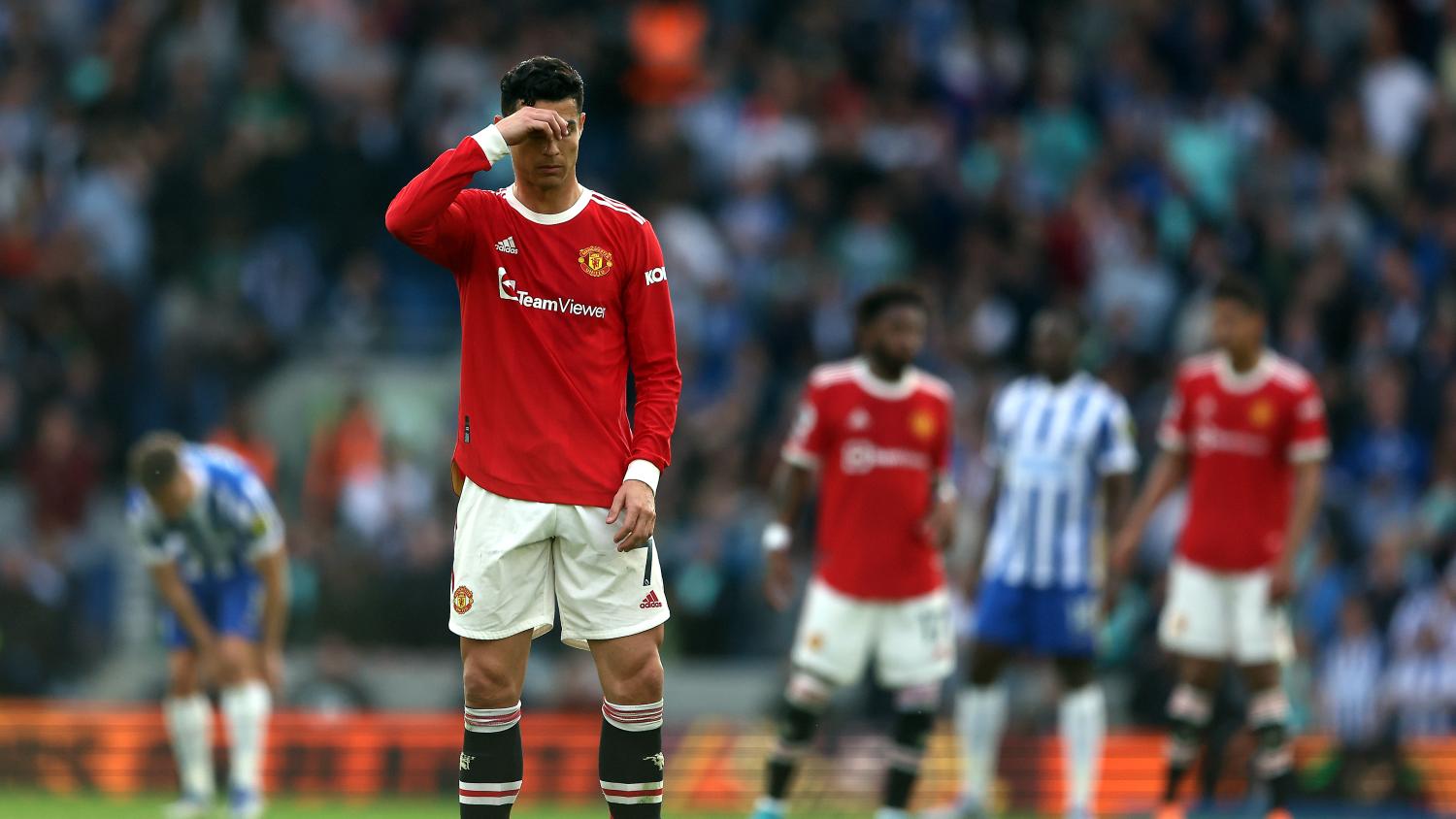 Cristiano Ronaldo looked embarrassed as his team was throttled by Brighton on Saturday.
Getty Images

BRIGHTON, England — Brighton & Hove Albion trounced Manchester United 4-0 in the Premier League on Saturday, as Ralf Rangnick's side suffered a fifth straight away defeat with another woeful defensive display.

The result was Brighton’s first victory at home since December and they got it in style with the Seagulls thoroughly dominating, as Moises Caicedo, Marc Cucurella, Pascal Gross and Leandro Trossard all found the net.

The defeat means it is now mathematically impossible for sixth-placed United to qualify for the Champions League, as they sit five points adrift of fourth-placed Arsenal with one game left to play.

United can no longer finish top-4 and can only get a maximum of 61 points. Which means United are having their worst Premier League season ever. #BHAMUN | #MyPLMorning pic.twitter.com/oCEXhoJpGU

Brighton, who are bidding to finish in the top half of the Premier League for the first time, are ninth, five points off a Europa Conference League spot with two remaining matches.

"It is a special day. (United) are a top side and we've let our home fans down this season, so it was a nice moment,” Brighton captain Lewis Dunk told Sky Sports.

Caicedo netted his first goal in a Brighton shirt in the 15th minute when he took advantage of the ball ricocheting off Alex Telles to tuck a low drive inside the post from outside of the box.

Cucurella made it 2-0 after the break, firing into the roof of the net from close range.

Gross then steered a shot past David de Gea before Trossard added the fourth when Diogo Dalot’s clearance bounced off his chest and into the United goal.

The hosts continued to pick holes in the United defence, going close when Dalot diverted a ball heading to Alexis Mac Allister onto the post, rather than to the Argentinian.

United attempted to fight back but a strong goalkeeping performance from Robert Sanchez kept them out.

The visitors did manage to put the ball in the back of the net, but Edinson Cavani was clearly offside when he poked home after Harry Maguire flashed a ball across the goalmouth.

United have now conceded 56 goals in the Premier League this season, their worst defensive record in a single campaign in the competition.

"The result is what it is,” United midfielder Bruno Fernandes said. “It is not good enough.

"They outplayed us. They always had a solution. Pressed us better and they deserved the result.

"A little bit of everything (went wrong). Quality. Mentality. They deserved to win and we deserve to be in the position we are in now.”