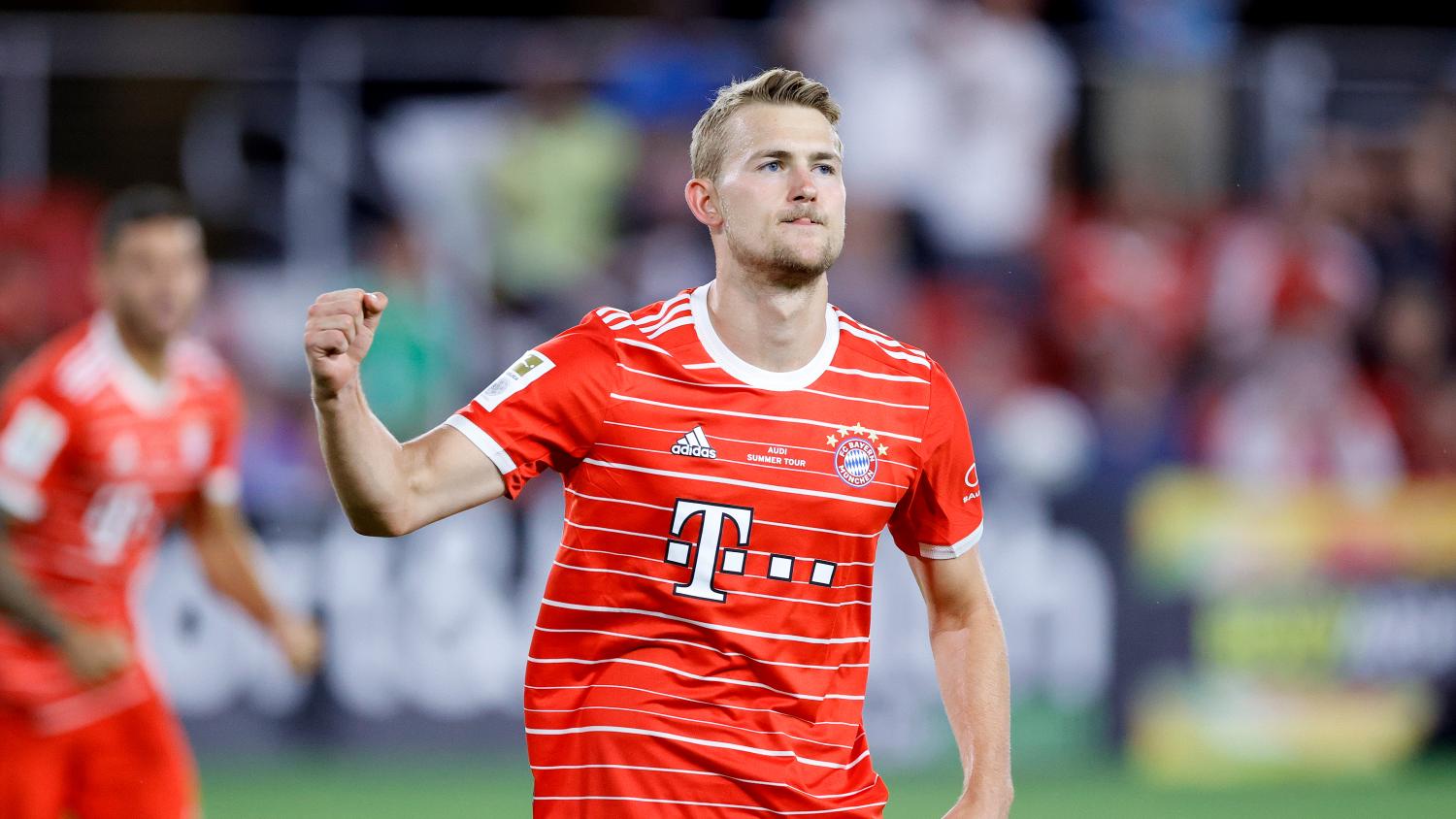 We ranked the 10 best defenders at the 2022 World Cup in Qatar.
Tim Nwachukwu | Getty Images

A well-oiled defense can be the difference between going out in the group stage and winning a tournament. Scoring four goals in a game is well and good until you turn around are realize the other team scored five. Every successful team needs to be able to keep the ball out of its own net. Defending is an art, and at the 2022 FIFA World Cup in Qatar, many artists will be on display, putting their bodies on the line to ensure their team advances to the next round. But not all defenders are created equal. This these 10 best defenders at World Cup 2022 have set themselves apart from the rest and put their teams in a great position to make a deep run in this fall’s tournament.

The first of two Brazilians on this list, PSG standout Marquinhos will be hoping to be making the trip to Qatar this fall for what would be his second World Cup. The 28-year-old center back is entering his 10th season with the Parisians and has cemented his place as a starter and one of the best defenders in the world.

If Marquinhos doesn't make one of the blocks of the season, this would've been a brilliant, brilliant goal.

Messi picks it up in his own half, takes 5-6 players out of the game with little 1-2's and slick dribbling, and then it's a stunning pass from Alba. Ugh. pic.twitter.com/2sHSSWc6bt

With 1.56 blocks per game, Marquinhos is a great person to have behind the ball, but he does have a bad habit of being dribbled past more than he would expect to be. Alongside Éder Militão, he and Brazil will be a force to be reckoned with in Qatar.

Maestro Kimpembe, as the song goes, is PSG’s second name on this list and also has a wealth of experience having spent his entire career with the Paris side. He is great against the dribble, having only been passed on 10 occasions this season, as well as accruing 1.89 interceptions per 90.

With France, he has started a majority of games alongside William Saliba, but Kimpembe has been the main man. He does a fantastic job of keeping the ball by completing 95.9 percent of his passes. With Kimpembe distributing the ball to Paul Pogba, N'Golo Kanté and Aurélien Tchouaméni from the back, France will be well off for a long time to come.

The only outside back on this list, Cancelo has changed the way his position is played. While other players like Raphaël Guerreiro, Trent Alexander-Arnold and especially Alphonso Davies may be better attacking threats, Cancelo earns his spot on this list as the better defender of the bunch. His 1.5 tackles won per 90 puts him among center backs, even in his advanced role. He also adds 0.26 expected goals and assists per 90, showing his remarkable contribution on both sides of the ball.

Portugal goes into Qatar as a genuine threat despite qualifying through the playoffs. With Rúben Dias and Pepe, still playing at 39 years old, outside backs Cancelo and Guerreiro will be allowed to push up and join the attack, making them a nightmare for anyone tasked with marking them. His immense pace and sublime technical ability make him a key player to watch this fall.

Fresh off winning the Champions League with Real Madrid, Éder Militão is a big part of Brazil’s hope of winning the World Cup for the first time since 2002. The Brazilian averages 1.19 tackles won per 90 and just over two interceptions per 90, making him one of the most well-versed defenders in the world.

With Brazil, he won the Copa América in 2019, and he has a strong chance of adding to that this fall. Attackers will have trouble sleeping knowing they have two of the world’s best defenders between them and the goal. With an admittedly weak group, Brazil will be expecting a deep run in the fall.

From one Real Madrid man to another, Antonio Rüdiger signed for Los Blancos on a free transfer over the summer. The German international has impressed during his time in London and with his new move will have played in Germany, Italy, England and now Spain.

Under coach Hansi Flick, Rüdiger has started alongside Niklas Süle as Germany replaces Jerome Boateng and Mats Hummels, who won the 2014 World Cup but then crashed out in the group stage four years later. The former Chelsea man has shown improvement and consistency for Germany as it looks to return to its place as one of the world’s elites this fall.

Another summer transfer, Koundé is among the youngest on this list but is by no means inexperienced. While Presnel Kimpembe and William Saliba have been favored ahead of Koundé for France, the new Barcelona signing has good reason for why he should be the main man in central defense.

Compared with Kimpembe, Saliba and even Raphaël Varane, Koundé has been dribbled past the least and has completed more tackles per 90 than any of them this season. With France, he has been employed on the right where he absolutely can play, but he is at his best when he plays centrally.

A controversial choice for fourth, it is not debatable that van Dijk has been one of the best defenders in the world since his move to Liverpool. However, when looking at the stats, his numbers just aren’t as impressive as those around him. While absolutely still impressive, his 0.91 blocks per 90 and 1.38 interceptions per 90 are well short of many others on this list. He still is arguably the best in the world against the dribble, only being dribbled past a staggering 0.12 times per 90.

Bring on the season! pic.twitter.com/VvRlPEvPOY

After missing out on the World Cup in 2018, Holland will be looking to make a deep run as it did in both 2010 and 2014, finishing runner-up and third place, respectively. Van Dijk commands respect and brings a wealth of experience to a younger Dutch squad, and his guidance and leadership could lead to a successful campaign in Qatar.

At 31 years old, Kalidou Koulibaly is comfortably one of the oldest players on this list. Despite this, his time at Napoli was immensely successful and was enough to secure a $41 million move to Chelsea this summer.

"It was good [playing with him vs Udinese]. He is a player with a lot of experience. He played in Italian football, which for me is the best defensive schooling you can possibly receive. He is ready for our ideas."

For Senegal, Koulibali was a key part of the side that won the AFCON earlier this year, with 26-year-old PSG center back Abdou Diallo playing alongside him for the majority of the tournament. The pair will be among the best at the World Cup this fall, and in a group with the Netherlands, Qatar and Ecuador, Senegal will be hoping to advance thanks to its defensive master.

Manchester City signed Rúben Dias in 2020 for $74.8 million, and he has been an immense success for the Cityzens. With 1.01 tackles won per 90 and 0.77 expected goals allowed per 90 while he is on the pitch, Dias has truly shown he deserves to be in the conversation as one of the world’s best defenders.

With Cancelo, Pepe and Guerriero in defense for Portugal, opposing attackers will certainly be up against it. Aged just 25, he looks to be a fitting and able replacement for his center back partner, Pepe, as he heads toward the end of his career.

At just 22 years old, calling Matthijs de Ligt the best defender at the World Cup may sound like hyperbole, but the former Ajax man is absolutely no joke. His leadership is incredible, his bravery is tremendous and his ability is second to none. This season he was dribbled past just 0.2 times per 90, registered 4.38 clearances per 90 and had 1.62 blocks per 90. His pure consistency and wealth of experience at such a young age set him apart from the rest.

What a strike for his first Bayern goal @ESPNPlus pic.twitter.com/2tKmnr2sOh

This is set up to be the World Cup of Matthijs. After a massive money move to Bayern Munich from Juventus this summer, he will be playing at his first World Cup and alongside Virgil van Dijk; the few who are not aware of the young Dutchman will be made aware on the world’s stage. With arguably the best defensive partnership in Qatar, it is certainly difficult to bet against the Netherlands this fall.