USA player ratings vs. England: The whole country is behind these boys now 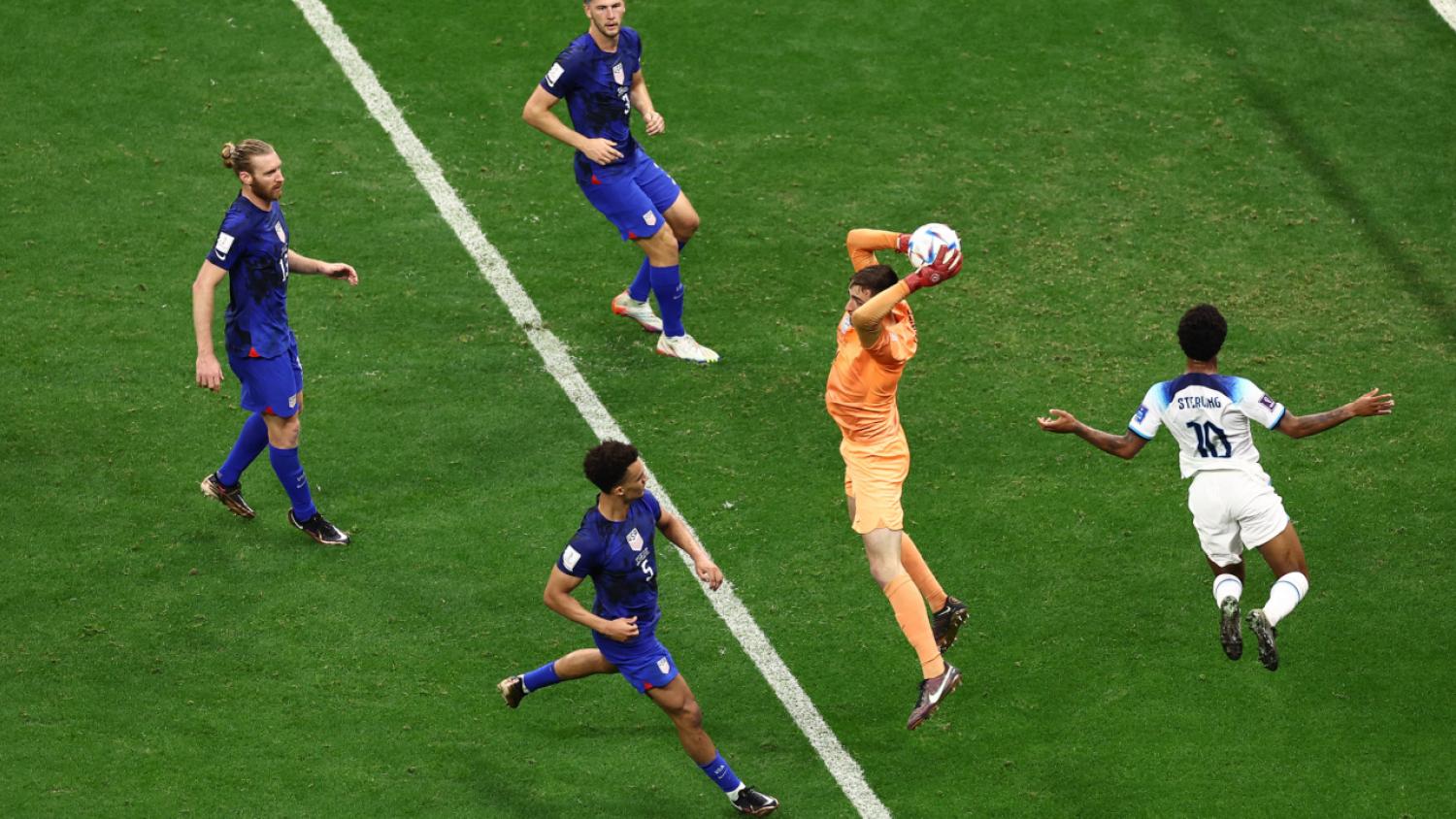 The U.S. battled to an intense, engaging 0-0 draw with England.
Getty Images

The USMNT "won" another famous World Cup draw with England on Friday, battling to a 0-0 stalemate in a gripping affair in which the U.S. outshot the Three Lions 10 to eight, earned seven corners and, without a doubt, inspired its country back home.

Before the tournament started, if U.S. supporters were offered the eventual outcome of only needing to beat Iran to advance to the last-16 they'd have taken that agreement in a heartbeat. Well, that's the scenario the U.S. faces on Tuesday after Iran beat Wales 2-0 earlier in the day.

Group B is wide open heading into the final matchday and you have to feel good about the Americans after a very good 90 minutes against the world's fifth-ranked side.

The decision to stick with both Weston McKennie (putting him wide) and Yunus Musah proved an inspired one with the U.S. winning the midfield battle. Haji Wright also came in and the team switched to a roughly 4-4-2 formation that ultimately sowed chaos and confusion in the England ranks for large periods of time.

Gareth Southgate brought on his embarrassment of riches off the bench, but Berhalter's own changes kept the U.S. going toe-to-toe with the Three Lions. I'm sure people will find complaints but I have none.

Turner pulled off an excellent, fingertip save on Mason Mount in the first half. He might have made me nervous with a few of his dangles on the ball — and one dribble straight up the middle of the pitch — but Turner sure as hell wasn't nervous about anything.

He had a couple good moments of distribution too, and he was flawless coming off his line to collect crosses into the area.

Part of the right flank that dominated England's left-hand side from around the 20th minute to the 60th, Dest provided a couple delicious balls into the box and surged forward on the dribble. Defensively, Raheem Sterling was hooked in the 68th minute and that's a huge win. He was brilliantly nutmegged by Luke Shaw once, but ah well, that was kind of fun too.

A massive, massive block denied Harry Kane what looked like a certain goal in the first half. His passing? I think it says it all that England used Zimmerman in possession as one of its triggers to press, and one horrible turnover at the end almost threw away all the team's great work. Still, on the overall balance of his play against a stacked England attack, a good performance.

Ream, once again, was a picture of poise at the back. No American player won more defensive aerials — he ate everything up — and Ream also came through with three clearances. He's playing out of his mind in Qatar and I don't think it's going to stop.

Robinson didn't have much joy going forward, but he was a co-leader in tackles, led the team in interceptions and Bukayo Saka — after looking like he was going to be an absolute menace following the opening 20 minutes — ended up having a very quiet night.

He was energetic, sharp and lively with and without the ball. After a poor game against Wales, McKennie rebounded with slick distribution, solid defensive work and a performance of real personality.

The only negative was that he had a great chance in the first half that he put over, and then in the second he had time and space on the edge of the area and slashed another shot over.

What a CHANCE for Weston McKennie pic.twitter.com/uRMhyV5MVw

Should we make a four-cent coin and put Tyler Adams on it? I think we should. Mason Mount and Jude Bellingham looked so damn good against Iran getting forward from midfield, but they ran into Adams on Friday.

What a tackle for the @USMNT pic.twitter.com/xKC180b5xK

When England sliced through Musah early and nearly got the opener, the alarm bells were ringing. But he found his feet from there with a couple sexy turns to release the U.S. attack and complimented Adams well in the middle of the park. It wasn't his most effective game in the attacking half, but you can't fault his tireless work over 90 minutes.

Pulisic almost had his moment: a venomous crack that rattled the top of the crossbar with Jordan Pickford flailing his little arms. The U.S. right, rather than Pulisic's left, was where the joy was, but he also stepped up his delivery from corners this match. Unfortunately, the slab head of Harry Maguire (probably England's man of the match) was there to meet almost every single one. After not having much success beating his man against Wales, Pulisic made a couple dangerous dribbles to upset the numbers.

It feels like his time is coming against Iran.

PULISIC OFF THE CROSSBAR

So close for the @USMNT pic.twitter.com/ie0dmbVIIj

Weah had a clean game helping menace England's left-hand side. He provided the cross that McKennie could've converted, and he had a saucy backheel to get the U.S. forward at one point. His influence in the second half wasn't nearly as great and Gio Reyna replaced him in the 83rd.

Wright put in that defensive work, making a tackle inside the United States' own half and battling for aerials while holding it up well a couple times. But it's another match in which our striker's best qualities were being the first defender. Wright was replaced by Josh Sargent in the 83rd, and questions remain over who's best suited to get the goals against Iran.