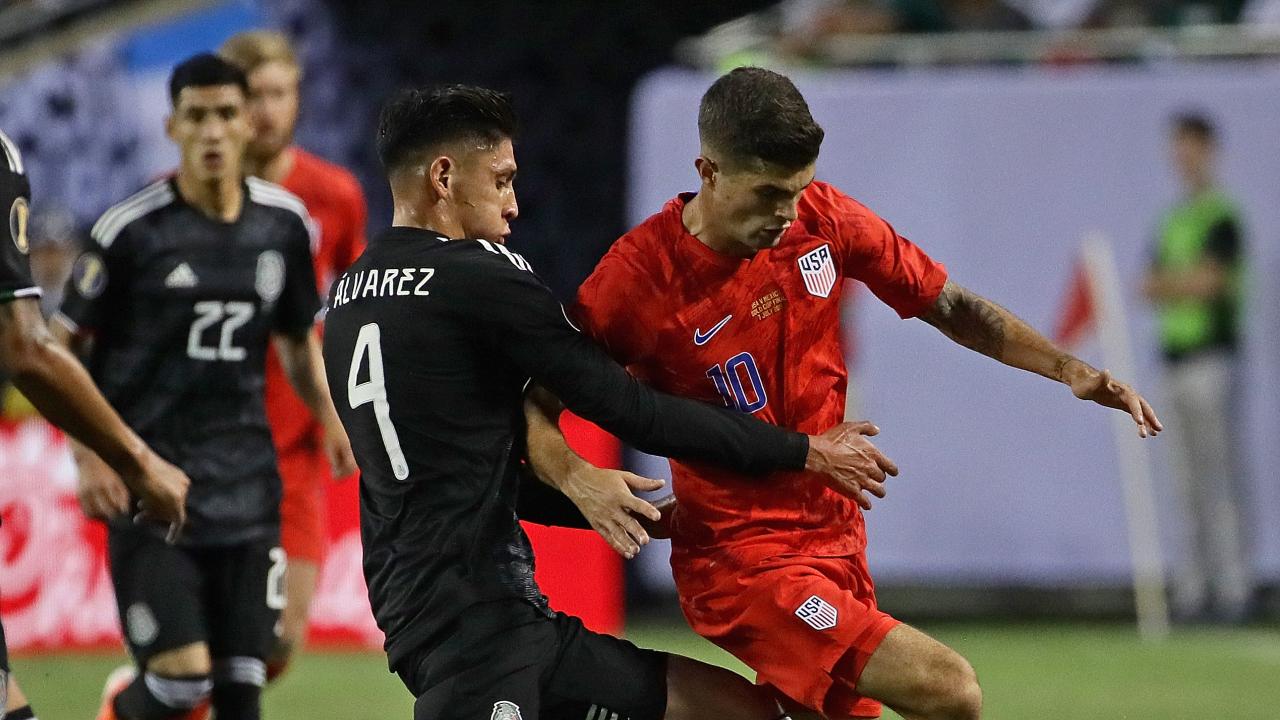 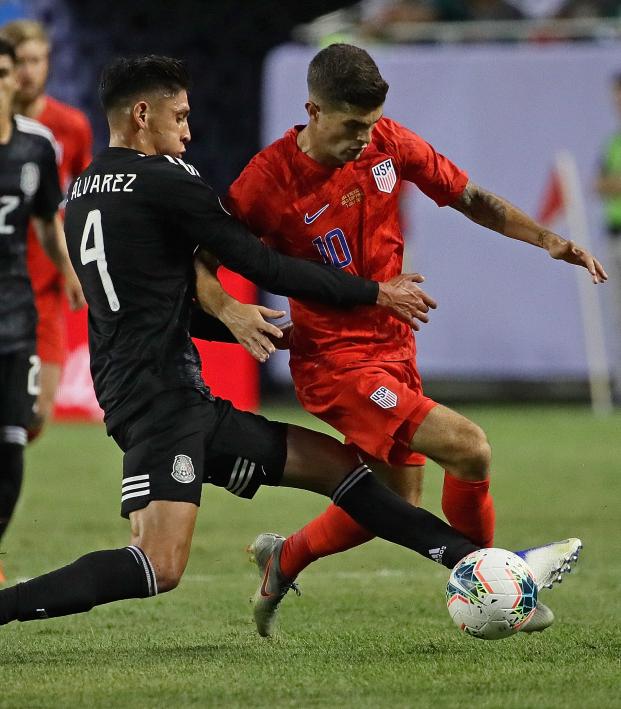 USMNT vs. Mexico For Dummies — How To Explain Friday’s Match To Filthy Casuals

The biggest quadrennial men’s soccer game in America is on Friday. Chances are, you or someone you know has no idea what’s going on. That’s fine. We’re here to explain USA vs Mexico, to either help you explain what’s going on to your filthy casual friends or so you don’t look like the dummy to your buddies on Friday night.

The United States men’s national team hosts Mexico in World Cup qualifying on Friday, Nov. 12, at TQL Stadium in Cincinnati, Ohio. It’s a massive showdown of the region’s top two men’s national teams and one that will go a long way toward deciding who goes to the World Cup next year and who stays home.

Here’s everything you need to know about USA vs Mexico, from what it is, what it means and how to watch — all listed in an FAQ format so even filthy casuals will understand.

What is this USA vs Mexico game all about?

We’re going to assume you don’t know anything about soccer and start as simply as possible. Friday’s game between the USMNT and Mexico is a showdown between 11 of the best American players against 11 of the best Mexican players. They’ll play soccer for 90 minutes, after which time the team with more goals wins, or the teams will finish in a tie.

I understand the concept of soccer, but who can play for these national teams?

OK, but what makes this USA vs Mexico game important?

The USMNT and Mexico play a lot. They are each other’s most common opponent, having played 72 times since the first meeting in 1934.

This match is important because it is a qualification match for the 2022 World Cup, which will be played next year in Qatar. The World Cup is the biggest soccer competition in the world, bringing together national teams from around the globe to battle for soccer supremacy. Defeat for either team could lead to not qualifying for the World Cup.

I’ve heard of the World Cup, who says I haven’t? How does qualifying work?

Every four years, more than 200 nations from around the world attempt to qualify for the World Cup. The qualification process is split up by region: Europe, Africa, Asia, South America, Oceania and Concacaf, which is comprised of North American, Central America and the Caribbean.

Mexico and the United States are historically the two best teams in Concacaf. Usually both nations qualify for the World Cup, but the U.S. missed the 2018 tournament and Mexico would have missed the 2014 edition had it not been for the USMNT’s help.

For this World Cup qualifying campaign, the eight best teams in Concacaf face off against each other in seven home and seven away matches. Three points are given for wins, one point to each team in a draw and no points for a loser. After each team has played 14 matches, the three teams with the most points qualify for the World Cup. The fourth-place team plays a team from another continent to determine one last berth to the 2022 tournament, which will have 32 nations competing.

How has World Cup qualifying gone so far?

Mexico has started strongly and is one of two undefeated teams. The U.S. struggled at the outset but has rebounded nicely by winning three of its last four. Canada is undefeated but only has two wins. Overall, there have been 10 draws in the first 24 matches, leaving the table tighter than usual.

Who usually wins between the USMNT and Mexico?

The U.S. won the first meeting 4-2 in a World Cup qualifier in Rome, days before the 1934 World Cup. The USMNT earned a spot at that World Cup, but lost 7-1 in the first round to eventual champion Italy in what was a single-elimination tournament.

After that, the U.S. didn’t win a game against its southern rival until 1980, by which point Mexico owned a 22-2-3 record over the Americans. To this day, the USMNT has been unable to put too much of a dent into that hole in the overall record.

Mexico owns more international trophies, having claimed 11 Gold Cup titles (the regional championship for Concacaf) compared to seven for the U.S. The teams have met in seven Gold Cup finals, with Mexico winning five. The U.S. won the inaugural Concacaf Nations League tournament, beating Mexico 3-2 in the final earlier in 2021, and then beat Mexico 1-0 in the Gold Cup final two months later.

In addition to holding an overall lead in wins and losses, Mexico has outscored the U.S. 144-84 all time. Here’s a list of the top scorers in USA vs Mexico matches, and here are some of the best goals scored in the recent history of the rivalry.

Why do I keep hearing people say “Dos a Cero” so much?

Starting with qualifying for the 2002 World Cup, the U.S. ran off four consecutive 2-0 wins over Mexico in World Cup qualifiers held in Columbus, Ohio. Adding in the 2-0 win the U.S. recorded over El Tri in the 2002 World Cup Round of 16 (to date the only meeting between the rivals at a World Cup), “Dos a Cero” became a rallying cry for American fans.

(For more on what Dos a Cero means, click here.)

But why should I care about USA vs Mexico in soccer? I’m a dumb American, I’m supposed to hate soccer, right?

If the above information isn’t enough to get you excited for the match, the rivalry has an outsized importance off the pitch as well. In addition to World Cup qualifying, there’s a geopolitical aspect to the rivalry given the proximity of the two nations and their relationship to each other.

While politics are always changing, the rivalry has also long been a source of pride and bragging rights for Mexicans, Americans and Mexican Americans. The cultures of the U.S. and Mexico are closely intertwined, and nowhere is this more evident than in the USA vs Mexico soccer games. And, the teams just don’t like each other, with the matches always bringing out physical play bordering on dirty from both sides.

Soccer is the dominant sport in Mexico, whereas it’s maybe fourth or fifth most popular in the U.S., so Mexico hates to lose to its annoying neighbor to the north. The result is a rivalry unlike anything you can find in the NFL, NBA, MLB or NHL.

Additionally, this match and the return leg in Mexico on March 24 could be the final meaningful World Cup qualifying matches. FIFA will expand the World Cup to 48 after 2022, meaning Mexico and the U.S. will likely be near-automatic qualifiers, lessening the importance of these matches. (The next World Cup in 2026 will be co-hosted by the U.S., Mexico and Canada, and therefore those nations qualify automatically.) Cherish these qualifiers while we still can.

OK, I’m sold. How can I watch USA vs Mexico?

Hopefully by now I’ve convinced you to watch the USA vs Mexico World Cup qualifier — more likely, you were already going to watch but maybe you can use this to convince your buddies to join you.

The match follows the broadcast rules for other World Cup qualifiers. Since it is a U.S. home game, the match will be broadcast on ESPN2 and Univision in the U.S.

For more on how to watch in both English and Spanish — including when TV coverage starts — click here.