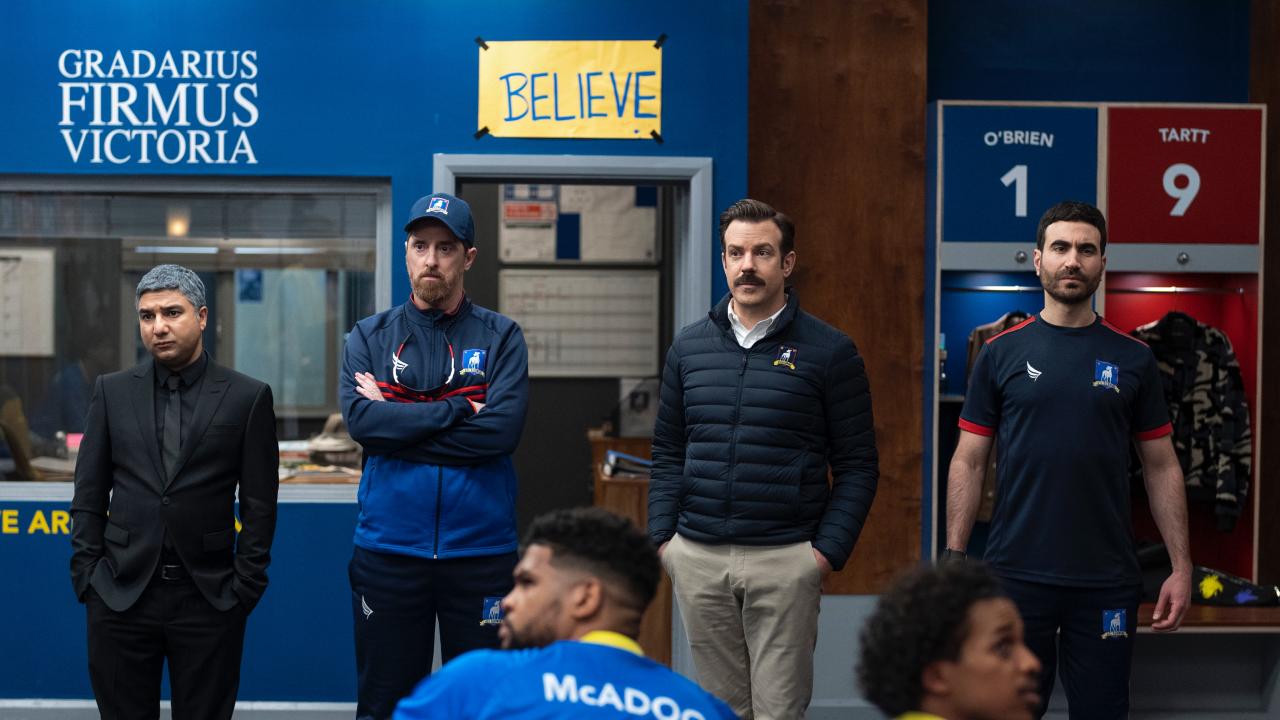 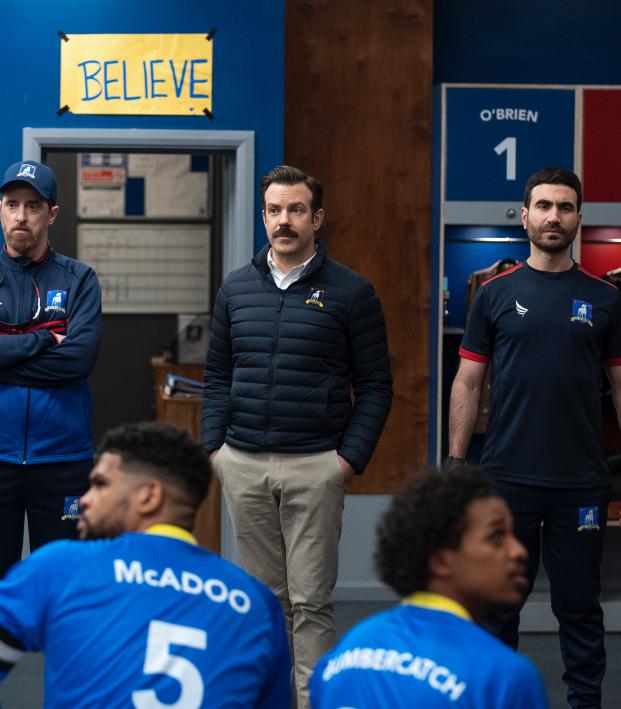 Explaining The ‘Ted Lasso’ Season 2 Finale, Including That [Spoiler Redacted]

Season 2 of “Ted Lasso” opens with a closeup of Nathan Shelley’s eyes, the assistant coach watching with youthful enthusiasm as his team earns a late penalty against Nottingham Forest. Season 2 ends with a closeup on Nate, hair turned completely gray, the sparkle completely gone from his eyes.

Nathan Shelley is now the villain of “Ted Lasso” — he is now the rival coach on Rupert Mannion’s West Ham. Season 3 is gonna be fun.

The second season of “Ted Lasso” concluded this week with “Inverting The Pyramid of Success,” the 12th and final episode of the season. There were so many call-backs and parallels to previous episodes, it was almost hard to keep track of it all. But the biggest one set the stage for what is sure to be a major theme in Season 3: Nate’s turn from sheepish kit man to brazen rival.

The major theme throughout Season 2 was mental health. All season long characters like Ted Lasso, Coach Beard, Sharon Fieldstone, Jamie Tartt and Roy Kent were seen dealing with hefty mental health issues. Some, like Ted, received professional help from Sharon. Others, like Beard, did things their own way.

But one character whose mental wellbeing was mostly ignored throughout the season turned out to be the one man who needed help the most: Nate.

As Season 2 started, Nate was an up-and-coming assistant coach. Promoted from kit man to tactician, Nate became a beloved member of the team. But behind the scenes, he was hurting. By the end of the season, Nate was wearing all black, his hair having slowly transformed from speckles of gray to full salt and pepper. Thinking he’d been ignored throughout the season, Nate turned on Ted and AFC Richmond, ripping apart the “Believe” sign Ted hung in the locker room in the very first episode of the series. As Season 2 ended, he abandoned his team and joined Rupert’s West Ham.

I don’t think I’ve been more pissed off in my life. #tedlasso pic.twitter.com/Y4ngRIj1Cr

I could easily go through and detail all the moments it became more and more apparent Nate was transforming into a villain. But the truth is, Nate already did it for me.

Me again! CONTAINS SPOILERS so maybe don't read until you've watched the season finale, but here are a few thoughts on Nate and responses to your tweets! X #TedLasso PS Also, huge shoutout to the magnificent @joekellyjk47 who cowrote this episode with Jason ⚽️ pic.twitter.com/Z1Rvuok422

Mohammed sees Nate as a José Mourinho type of coach, someone who is abrasive yet brilliant. Nate doesn’t see himself as the villain; in his mind, he’s the special one who’s been abandoned by the team, not vice versa. Mohammed also points out little microaggressions that at the time didn’t seem like much, but over the season built up into his final outburst at halftime.

Most interesting is a fact I hadn’t noticed until Mohammed’s post: The only time Ted and Nate are alone together for a scene in the entirety of Season 2 is Nate’s outburst during the Brentford match. While not noticeable to most viewers, it was clearly weighing heavily on Nate.

As sad as it was to see Nate transform into the villain, it wasn’t exactly a surprise. I literally wrote last week that I thought Rupert might buy a Premier League club and hire Nate as his coach, and that’s exactly what happened.

Perhaps had Nate sought the services of Sharon or another therapist, he could have recognized this destructive pattern and spoke to Ted about his feelings before it boiled over in this way. It’s devastating to think about the fact Ted looked at Nate as a son — his photo sits next to one of his biological son at home — but Nate thinks he’s been ignored. And it’s not a mistake that in Ted’s first press conference after Nate leaves the team Lasso brings up mental health and how getting help is stigmatized, especially in athletics.

if only he knew #tedlasso pic.twitter.com/6gIkFLRWjx

Ted was indeed forced to come face-to-face with his own stigmatization of mental health. Previously reluctant to even speak to Sharon, he eventually befriends and champions his therapist (slightly inappropriate, but we’ll allow it; it’s better than a reporter revealing his anonymous source, Trent). Ted addresses his players and apologizes for not telling them about his panic attacks. I’m not sure if it was planned this way, but the Season 2 finale was released a couple days before World Mental Health Day, which is Sunday, Oct. 10, just one more reminder of the importance of one’s emotional wellbeing.

Fortunately, Ted has built a strong supporting cast around him. While earlier in the series he was greeted with a delightful and cheery “Ted!” from Rebecca, Keeley and Higgins when he entered Rebecca’s office, when he entered in the Season 2 finale he was greeted by a somber-but-supportive, empathetic “Ted” after the article about his panic attack came out. In fact, by the end of the season, the Diamond Dogs essentially changed from a bunch of guys asking advice to a support group to aid one another’s mental health.

All but Nate, that is.

As for the other storylines in Season 2, we didn’t exactly see great conclusions in the finale.

The will-they-won’t-they between Roy and Keeley had a bit of an anticlimactic resolution in Episode 12. Jamie apologized to Roy, who forgave him, as he saw Jamie becoming the responsible adult Keeley wanted him to be before they broke up. All seemed mostly well until Keeley told Roy she couldn’t go with him on vacation. Roy thought she was breaking up with him, a clear sign that they don’t have as great of communication as it might seem, but then he left the plane tickets behind, indicating he had no desire to do anything without Keeley.

Will their relationship continue this rocky road in Season 3 or will they work it out with further communication? Here’s another point where a (couples) therapist could help, especially so Roy can discover he has more than a singular feeling.

Sam decided to stay at Richmond despite overtures from billionaire Edwin Akufo. The hilariously childish reaction of Akufo when he doesn’t get what he wants shows Sam made the right decision. Importantly, Sam made the choice not for a potential romance with Rebecca, but because it’s what he wants to do for himself. He plans to open a Nigerian restaurant in town and bring his culture to London instead of returning to Africa to play for a rich brat.

Dani Rojas began Season 2 by accidentally killing Earl, the greyhound mascot of the club, while taking a penalty kick. He ends Season 2 by converting the penalty kick that secured promotion, with Earl’s puppy replacement watching nearby. Rojas had “RIP Earl” on his Nemeziz cleats, showing he hasn’t forgotten the poor doggo.

I mentioned last week the need for a major LGBTQ+ character in the series and there was at least a minor one in Episode 12. One of the dog breeders giving Higgins options for Earl’s replacement is clearly enamored by Keeley, her eyes repeatedly staring at Keeley’s chest. It was weird and awkward and almost offensively trivializing to turn a lesbian character into a joke, but I guess it’s better than nothing? I’m not quite sure how I feel about it.

One piece of potential foreshadowing for Season 3 came when Arlo White pointed out Richmond was promoted for finishing second in the EFL Championship but remains without a trophy in club history. To me this means Richmond will win a trophy next season, though I’d hope the series creators make it the FA Cup and not the Premier League title, because the latter would be a bit too unbelievable.

The Season 2 finale was a good way to end the season overall. We saw Keeley turn from a panda to a lion, Coach Beard’s copy of “Inverting The Pyramid” go from unread to note-filled and Roy finally embrace Jamie as coach and friend. It didn’t resolve everything — the two big romances of Season 2 are still up in the air — but it set the stage for a Season 3 that can’t come soon enough.

Now we wait for Season 3, which will be the final season of “Ted Lasso.”