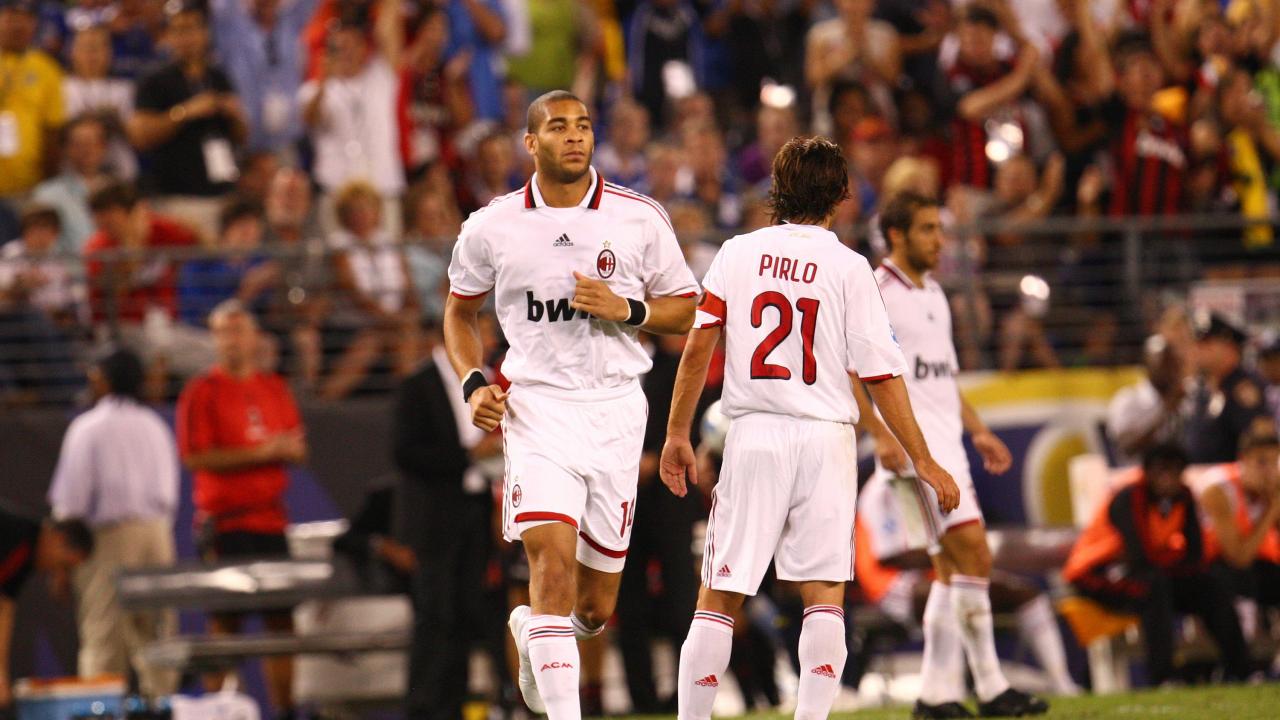 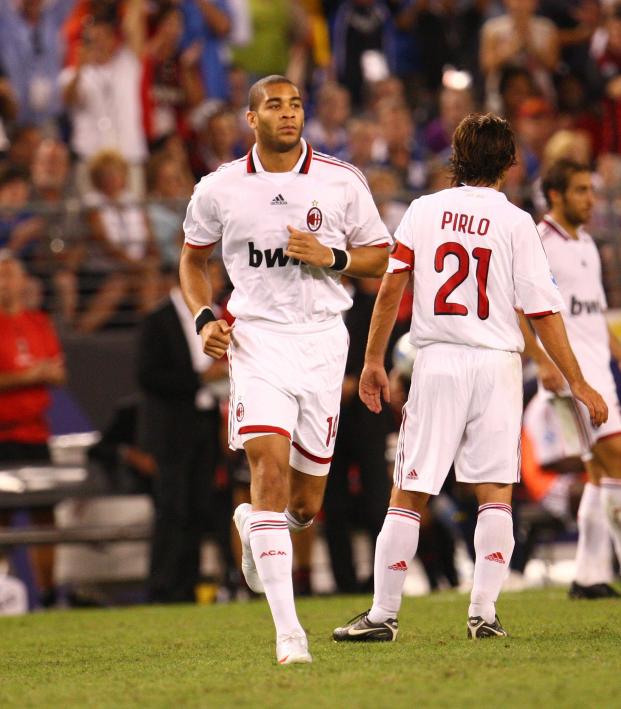 Remember When Oguchi Onyewu Fist-Fought Zlatan And Asked To Play For AC Milan For Free?

After Antonee Robinson’s rumored AC Milan move to become one of the few Americans to play in Italy’s first division fell through, we at The18 were reminded of the last USMNT defender to appear for the Rossoneri — Oguchi Onyewu.

Onyewu’s story is a cautionary tale for any American playing abroad, and a reminder that nothing in sports is a given, even if you want it so bad you break a legend’s rib fighting for it.

Oguchi Onyewu appeared 69 times (nice) for the U.S., including at the 2006 and 2010 World Cups. (We’re still pissed about that penalty call.) He played magnificently in the 2009 Confederations Cup, in which the USMNT came within 45 minutes of winning the whole damn thing.

After that 2009 tournament, Onyewu, then a center back for Standard Liège in Belgium, attracted the interest of big clubs in Europe. He eventually worked out a three-year deal to join AC Milan that July (on a free transfer).

At the time, Onyewu’s move was a huge deal for U.S. soccer, which had no Christian Pulisic traipsing around the upper echelons of Europe’s elite. Clint Dempsey was still plying away at Fulham and Landon Donovan had just had a goalless loan spell at Bayern Munich.

Sure, European stalwarts like Tim Howard, DaMarcus Beasley and Carlos Bocanegra were still doing their thang overseas, but this was a club with deep history. At the time, AC Milan featured Ronaldinho, Alexandre Pato, Clarence Seedorf, Gennaro Gattuso and Filippo Inzaghi (Kaká had just moved to Real Madrid). In a sense, Onyewu was attempting to fill the legendary boots of Paolo Maldini, who had just retired after 25 seasons in Milan.

And so Oguchi fuckin’ Onyewu, this 6-5 American CB from D.C., found himself in one of Europe’s most storied clubs.

It did not go well.

Oguchi Onyewu played for 11 clubs in eight countries over a 15-year professional career. After a promising start in Europe with Standard Liège, Onyewu never quite lived up to expectations. Some of this was due to injuries, but not all of it.

Onyewu made his first official appearance for Milan on Sept. 30, 2009, in a Champions League match against Zürich at the famed San Siro. He had appeared in a few preseason friendlies but Gooch finally made it into a match, in the biggest club competition in the world.

It would prove to be his final appearance with the club.

Onyewu came on as a sub replacing future Montreal Impact defender Alessandro Nesta at the hour mark as the home side suffered an embarrassing 1-0 defeat. (Milan would still advance to the knockout rounds, where it was thrashed 7-2 by Manchester United in the Round of 16 and be forced to watch rival Inter Milan win the whole tourney.)

An appearance in the Champions League at the San Siro in his first months wasn’t a bad start for the 27-year-old, but it all started to come unraveled when Gooch went away for international duty in October. In a 2010 World Cup qualifier against Costa Rica, Onyewu suffered a torn knee tendon.

The injury kept Onyewu out of the Milan lineup for the rest of the season. The Rossoneri finished third, 12 points back of champion Inter, and coach Leonardo was replaced by Massimiliano Allegri in June of 2010.

Onyewu would recover in time to play for the USMNT at the 2010 World Cup that summer. He started the first two matches of the tournament, draws against England and Slovenia, though he didn’t appear in the Algeria or Ghana matches.

But before the World Cup proved he was back to full health, Onyewu made international headlines with one of the weirdest moves you’ll ever see from a professional in any arena, let alone sports where one’s career spans such a short window of time.

The Gooch asked to play for free.

Disappointed by his season spent on the sidelines injured, Onyewu requested a one-year extension with the Rossoneri, with the stipulation that he not be paid by the club for this additional season. Milan gladly accepted this odd gesture and the 28-year-old American’s contract was extended through the 2012-13 season.

“Onyewu, who has been out for virtually the whole season due to injury, but who at this time is getting ready to face the World Cup adventure in South Africa with his national team, has become a star today with a significant gesture from a personal and professional standpoint,” the club said at the time. “Onyewu has requested and obtained a contract extension from 30 June 2012 until 30 June 2013. With respect to that year, as was his wish, which has been appreciated by the club, Onyewu has asked not to receive any type of wages. This is an exemplary gesture that deserves our sincere congratulations.”

Onyewu had bought himself some more time to work his way into the AC Milan lineup.

It didn’t work, and he failed to see out the remainder of his contract with the club.

The start of the 2010 season in Milan was an abject failure for Onyewu. Not only was he unable to work his way into the lineup, he couldn’t even get into the 18.

By November, tensions boiled over with teammate Zlatan Ibrahimovic.

During an afternoon practice session, Onyewu took offense to a challenge from Zlatan. The American — one of the few footballers able to size up to Ibrahimovic — grabbed the Swede by the neck and the two started going at it, fighting physically and verbally. Given the size of the players involved, it took 10 teammates to pull the two apart.

When the dust settled, Zlatan, who has an honorary black belt in taekwondo, had broken a rib. We’re no experts, but we’d say the Gooch won that fight.

“It was a fairly lively fight, it happens when there is a rather rough tackle,” Milan’s vice president, Adriano Galliani said at the time. “The players have worked it out. I spoke to Ibra and Onyewu. I am certain that for both the incident is closed.

“Better training than chamomile. It shows there is toughness.”

While Onyewu has opted to stay mostly silent on the brouhaha, Ibrahimovic has not. In an autobiography that was just as much fact as fiction, Zlatan recalled the fight with the American, saying it started when Onyewu was talking trash during practice. Zlatan decided to retaliate not with his words but with his actions and attempted to take Onyewu out with a dirty tackle. Ibrahimovic isn’t a great defender, so he missed, but the intention was clear.

“As I got up and walked away, I felt a blow to my shoulder,” Zlatan wrote. “‘Not a good idea, Oguchi Onyewu.’ I headbutted him, and we flew at each other. We wanted to tear each other limb from limb. It was brutal. We were rolling around, punching and kneeing each other.

“We were crazy and furious — it was like life and death.”

Zlatan, no stranger to brawls with teammates, would go on to lead Milan in scoring in 2010-11 and the entire league in 2011-12 before moving on to Paris Saint-Germain for four highly productive seasons.

Oguchi Onyewu was almost immediately shipped out on loan.

Two months after the fight with Zlatan, Onyewu went on loan at Twente in the Eredivisie. Onyewu found some measure of success in the Netherlands, appearing 14 times — including five in the Europa League — and picking up a medal for helping the Tukkers win the KNVB Cup over Ajax.

Despite finally getting on the pitch, Gooch’s time in Italy was over. After the season, and despite two years left on his contract, AC Milan gave Onyewu to Sporting in Portugal on a free transfer.

Gooch would bounce around a variety of clubs all over Europe. On a short loan spell with Málaga, he finally got another chance to take the field with AC Milan — as an opponent in the 2012-13 Champions League group stage. Onyewu came on in the 93rd minute of a 1-0 win, which helped the Spanish side then coached by Manuel Pellegrini take top spot in the group.

But despite playing for clubs like Sheffield Wednesday and Charlton Athletic, Onyewu never could find a permanent home. Eventually he returned to America and spent his final season with the Philadelphia Union in 2017.

Unable to find a club in 2018, the Gooch called time on his career that September. He’s now the sporting director for Orlando City B.

Onyewu’s farewell post on Instagram recalled memories of a career that was almost but not quite great. He played in World Cups, stared down El Tri star Jared Borgetti, won Concacaf championships and played against the best strikers in the world.

All good things must come to an end...Thank you  #GameOver @ussoccer_mnt @ussoccer #Blessed #Honored #Proud #TheEnd

Oguchi Onyewu had one of the most remarkable soccer careers of any American. And we’ll never forget his wild ride in Milan.