When Rapinoe Joined The NCAA Women’s Hoops Final Broadcast, There Were Cocks Jokes 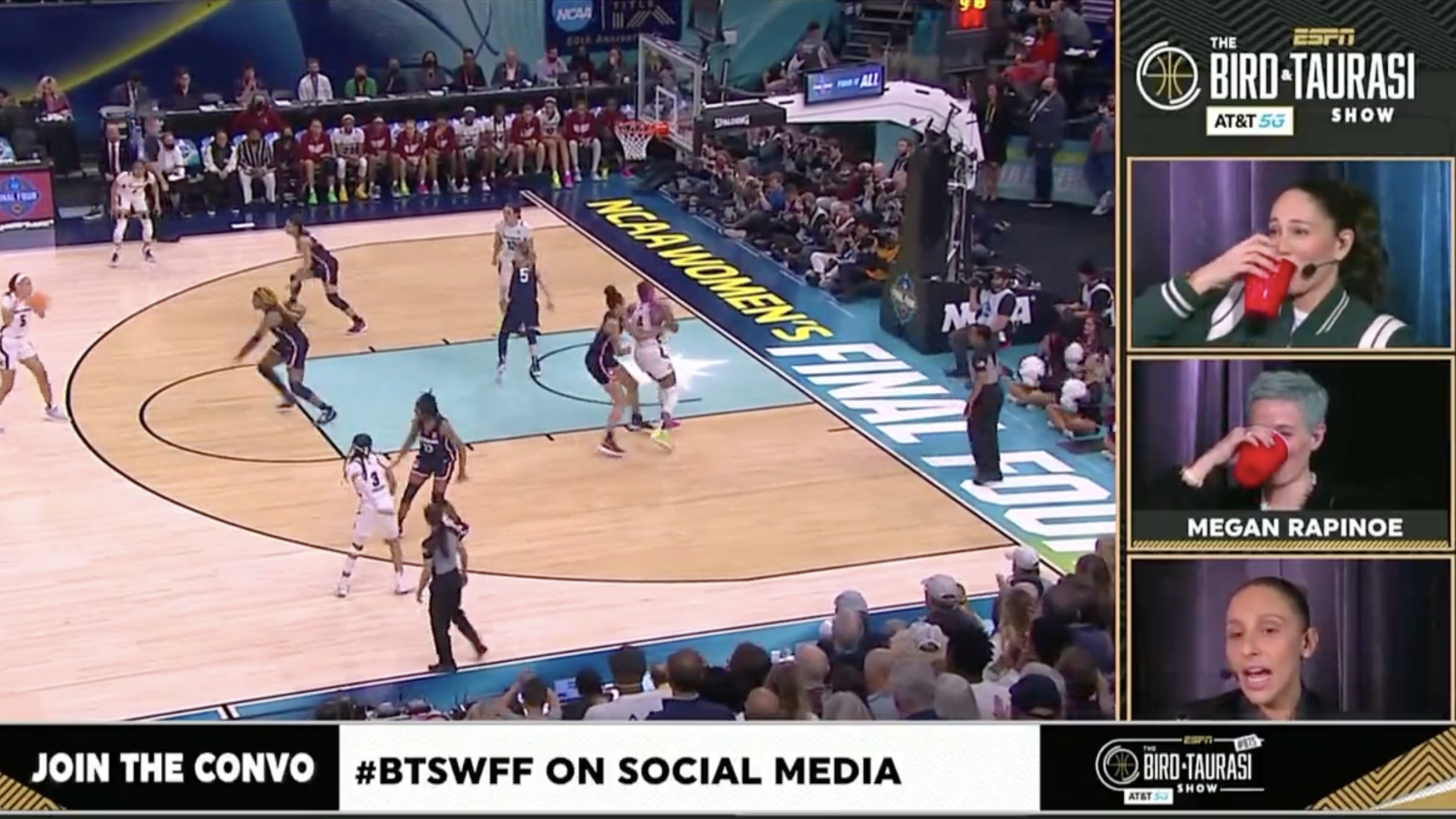 Earlier this year, I watched part of the NCAA football title game on an alternate ESPN2 broadcast featuring coaches from Texas A&M talking about the game. It was garbage television, and I’m an Aggie. When I saw the NCAA women’s basketball title game Sunday night had an alternate broadcast on ESPN2, I was initially skeptical, but I’m so glad I watched.

Sue Bird and Diana Taurasi, longtime teammates and opponents in college, the WNBA, the Russian league and Team USA, joined together for a Bird & Taurasi Show (BTS) live from the Target Center where the women’s Final Four was played in Minneapolis this weekend. Their commentary during the championship game between their alma mater UConn and the eventual champion South Carolina Gamecocks was equal parts insightful and hilarious, with a few dirty jokes and profanities laced in, especially when Bird’s partner, USWNT superstar Megan Rapinoe, joined the show in the second half.

Far better than a bunch of cranky old coaches trying to break down American football, BTS was an entertaining way to watch a game in which South Carolina jumped out early and never looked back. The show included interviews with LeBron James (the Christian Pulisic of the NBA) and longtime basketball reporter/broadcaster Doris Burke, but it really picked up at halftime when Rapinoe, a basketball fan, joined BTS from the booth in the Target Center.

Bird and Rapinoe have been dating since around 2017 and became engaged in 2020. Along with Taurasi, the three had great chemistry on the set, aided by sipping an unknown beverage from red Solo cups. Thanks to USA Today’s Lindsay Schnell, we know they were drinking Bud Light black cherry seltzer from those Solo cups. Why three of the biggest sports stars in the world are settling for a drink I can only assume tastes like cough medicine is beyond me, but it made for a memorable broadcast.

Among the highlights of the show were Rapinoe saying “shit” live on TV and a few dirty jokes, because watching a game involving South Carolina while drinking hard seltzer brings out the middle schooler in all of us.

"It's a game of inches, just ask the Cocks" DIANA pic.twitter.com/YwMcyk4Jjs

This wasn’t the first time Taurasi made some juvenile penis jokes. She dropped one during the broadcast of the Gamecocks’ win over Louisville in the semis on Friday.

"The length of the Cocks is long"
Diana Taurasi pic.twitter.com/5igEthPvU2

The entire broadcast was amazing. Hearing two of the greatest basketball players of all time share stories and analysis was far better than 95 percent of sports announcing.

This isn’t the first time we’ve seen these types of alternate broadcasts in sports. The Manning brothers did something similar, but I have no interest in the yawn-inducing NFL, so I didn’t watch. There are watch-along videos on YouTube for big soccer matches (CBS loves to do this), though these typically don’t include the actual match happening on the pitch.

When the World Cup rolls around this November, Fox should consider hiring some former players to watch the matches and chat during the action. This won’t be for everyone — some people don’t think it’s soccer if there’s not a stuffy old British man commentating — but there would be a large audience for it.

Obviously, Bird, Taurasi and Rapinoe wouldn’t make sense for these broadcasts, but we’ve come up with a few teams we’d love to see together to chat and drink during a World Cup broadcast.

Just like Bird and Taurasi, Rapinoe and Sinclair were college teammates who won a national title together before going on to become two of the most successful players in their sport.

The former Portland Pilots teammates would be fascinating to hear from during a game given their immense repository of soccer knowledge and experience. (Rapinoe shared some of that experience during Sunday’s broadcast.) And Sue Bird could join in too to return the favor.

If we’re going for pure football talk, I can’t think of a much better pairing to listen to than former Arsenal manager Wenger and player Henry. Wenger turned Arsenal into a free-flowing powerhouse, in part thanks to Henry’s inimitable abilities.

Both Wenger and Henry are now in the broadcasting world already. No one sees the game like Wenger and Henry can discuss the qualities of a player like Kylian Mbappé better than anyone in the world. Someone needs to make this happen.

DMB and Gooch have already teamed up for a great podcast, and I’d love to hear them do some live commentary/chatting during a big match. Beasley has more World Cup experience than any American male and Onyewu always has an interesting perspective. Plus, Gooch can beat Micah Richards in arm wrestling, which has to be worth something, right?

Wambach is the second all-time leading goal scorer in international soccer history (behind Sinclair). Doyle is a successful author trying her best to figure out the sport her wife made into a career. Together, they’re a hilarious married couple who I’d love to see watch games live.