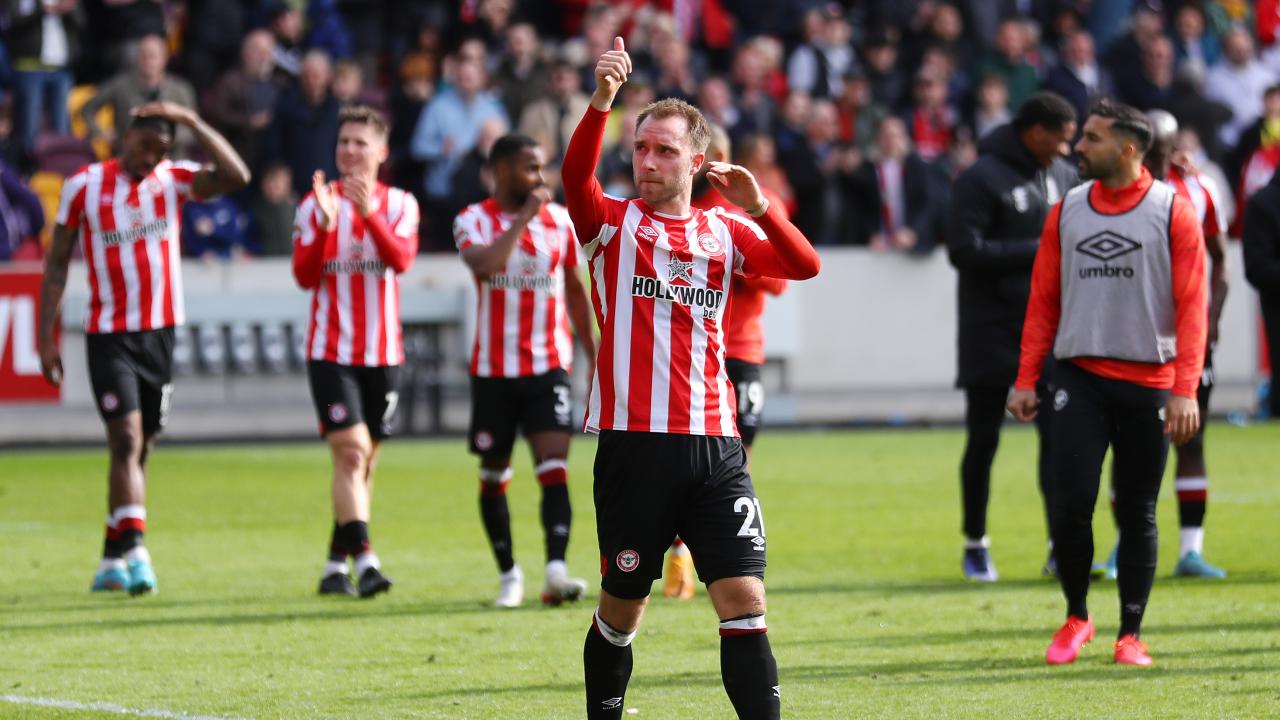 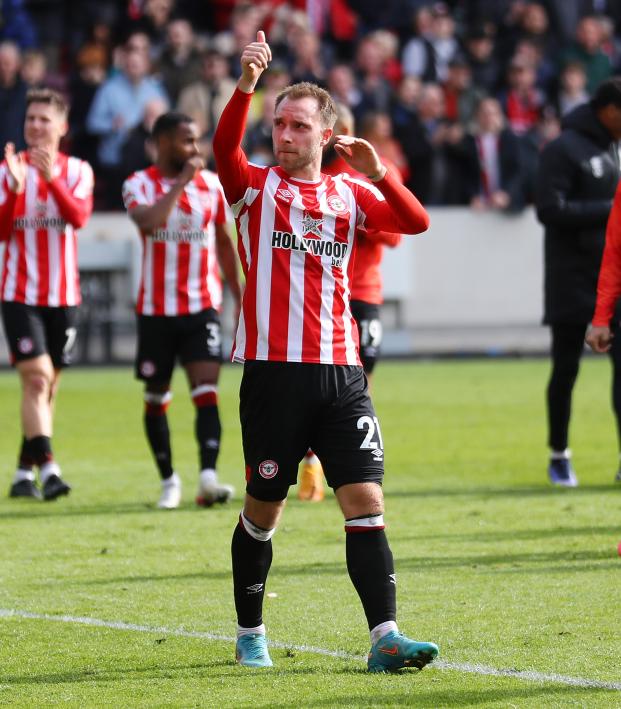 Few Premier League signings during the winter transfer window drew as much attention as Christian Eriksen's move to Brentford.

After his cardiac arrest episode over the summer during the Euros, it seemed like the Danish superstar might never suit up again.

Serie A rules forbid Eriksen from playing in Italy due to the defibrillator implanted in his chest, and he was released by Inter Milan. The Dane trained at the facilities of his former youth club, Odense Boldklub, as he waited for a job offer.

On Jan. 31, Eriksen signed a six-month deal with EPL side Brentford, and in his short spell with the club, Eriksen has transformed the London-based side. He has played the full 90 minutes in all seven of his league starts — five of which were Brentford wins.

He has garnered two WhoScored? Man of the Match awards and his 2.2 chances created per 90 minutes are among the best in the league. Plus, Brentford is 0.29 expected goals (xG) better with Eriksen on the pitch. Not bad for a free transfer.

Christian Eriksen with his first Premier League assist in 818 days

Eriksen's surface impact is undeniable, but what has the Danish midfield maestro done on a statistical level to galvanize Brentford's attack and lead the Bees on their best run of form on the season? The answer requires a deeper dive beyond simple soccer stats.

First, Eriksen's arrival led to a change in formation that allowed many Brentford players to return to their natural positions. Until the Danish international joined the club, Brentford had played a back three under manager Thomas Frank — usually with five midfielders but occasionally in a 3-4-3 or a 3-4-1-2.

With Eriksen in the side, Frank has switched to a back four for most of the matches. Regardless of the defensive setup, Eriksen has slotted in primarily as the left-sided player in a midfield three. This has allowed Christian Nörgaard — who occasionally occupied the LCM slot — to play solely in his natural position as a holding midfielder.

The Bees' midfield three has been fluid throughout the season, but the addition of Eriksen has sent Frank Onyeka (who held the title of Brentford record signing for about 24 hours) to the bench — leaving the consistent starting trio of Eriksen, Nörgaard and Vitaly Janelt.

The Nigerian Onyeka is advertised as more of a defensive presence, but his Danish replacement has offered similar numbers off the ball (3.9 tackles+interceptions/game for Onyeka, 3.2 for Eriksen). Onyeka has also offered little offensively as well, posting just 1.46 shot-creating actions per match (vs. 4.44 for Eriksen).

In terms of possession, Eriksen is averaging about 31 more touches per game than Onyeka and also attempting more than twice as many passes per match.

As for Brentford's two other primary central midfielders, Vitaly Janelt, like Nörgaard, is primarily a defensive option (although Janelt unexpectedly has a career-high four goals this year), while Mathias Jensen — Brentford's incumbent attacking option — has only been involved in one goal this season. 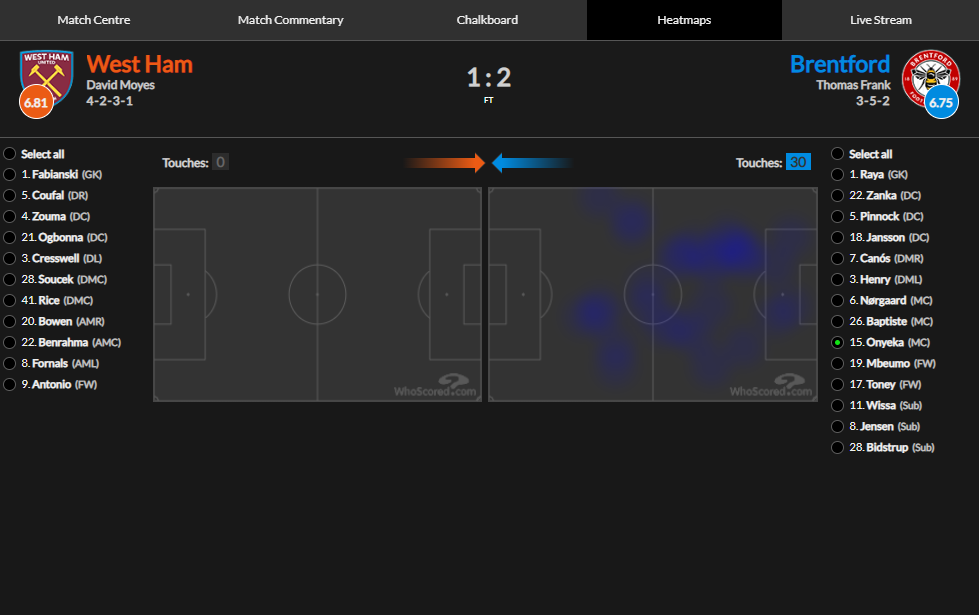 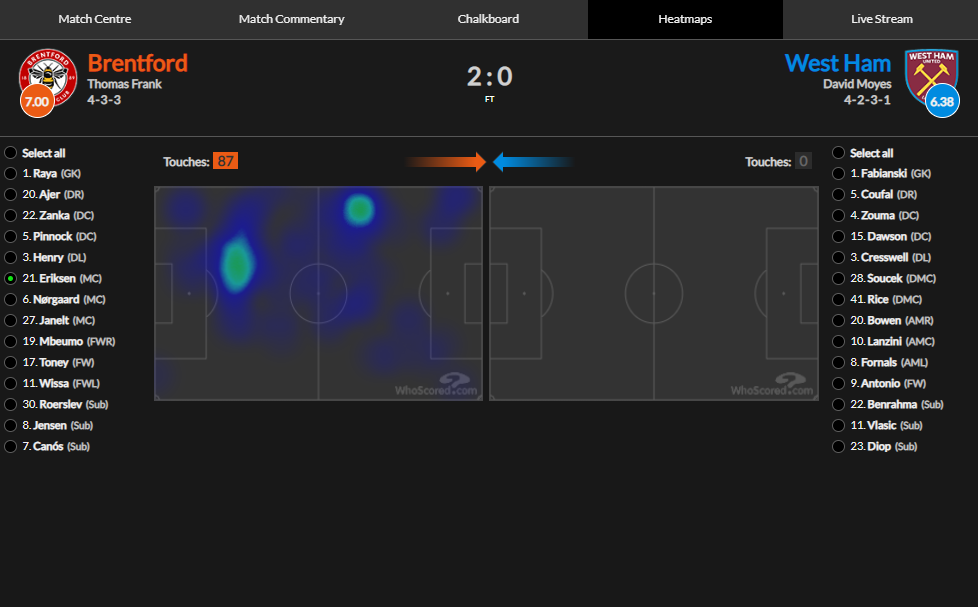 Another beneficiary of the Eriksen signing is attacker Bryan Mbeumo. The Frenchman has a goal and three assists in seven starts alongside the Dane, compared to just three goals and four assists in his other 25 EPL appearances.

Traditionally a winger, Mbeumo has mostly played as part of a front two with Ivan Toney this season, but the recent tactical shift has allowed him to spend more time on his natural right flank, where the left-footed phenom has more space to beat defenders and cut inside.

Brentford has four wins in four matches when Eriksen starts and Mbeumo plays on the right wing, and in those four matches, Mbeumo has seen an increase in progressive carries and overall touches.

Striker Ivan Toney has also enjoyed a strong run of form this spring, posting six goals and two assists while playing alongside Eriksen — both doubling his season totals. 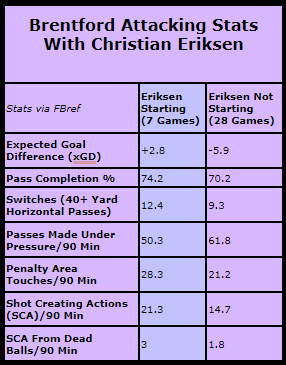 Christian Eriksen's impact can be seen on a team level as well. Most evident is Brentford's goal difference. Before signing the Dane, the Bees' goal difference, both expected and actual, was in the red. Since then, the club from London has outscored opponents by seven goals and 2.8 expected goals.

While, Brentford has not averaged more possession during its recent stretch (43.2 percent with Eriksen, 43.8 percent without him), it has been much more effective with the ball.

In just seven starts, Eriksen has already completed 34 switches (defined as passes that travel at least 40 yards horizontally), good for third on the team. By comparison, Frank Onyeka has completed six such passes across 1,045 EPL minutes.

As a result of Eriksen's ability to switch the play, his Brentford teammates have more time on the ball, as evidenced by the decrease in passes made under pressure.

Possession is all fine and well, but how does it translate into the final third? Quite well, actually. With Eriksen starting, Brentford is averaging 34 percent more touches in the penalty area per match.

The Bees have also increased their shot-creating actions per game by almost 50 percent with Eriksen on the pitch, and thanks to the Dane's set-piece prowess, Brentford has seen a marked increase in shots created from dead-ball scenarios.

In Brentford's most recent match — a 3-0 defeat to Manchester United at Old Trafford — Eriksen led the Bees in progressive passes, shot-creating actions, switches and passes completed.

Despite the final scoreline, the London-based side had an even number of progressive passes and shot-creating actions while being out-possessed 65-35 by its Mancunian opponent.

Eriksen's quality is easy to see just by watching him on the pitch, but a more thorough examination into the statistics shows truly how much of an impact the Danish midfielder has made on this Brentford side.

Brentford is rarely going to dominate possession during matches, but the addition of Eriksen has helped the Bees get more out of their time on the ball and become more efficient on the attack.

Christian Eriksen is still playing — something that didn't even seem possible a few months ago — and his performances for Brentford have shown that he is at the top of his game.