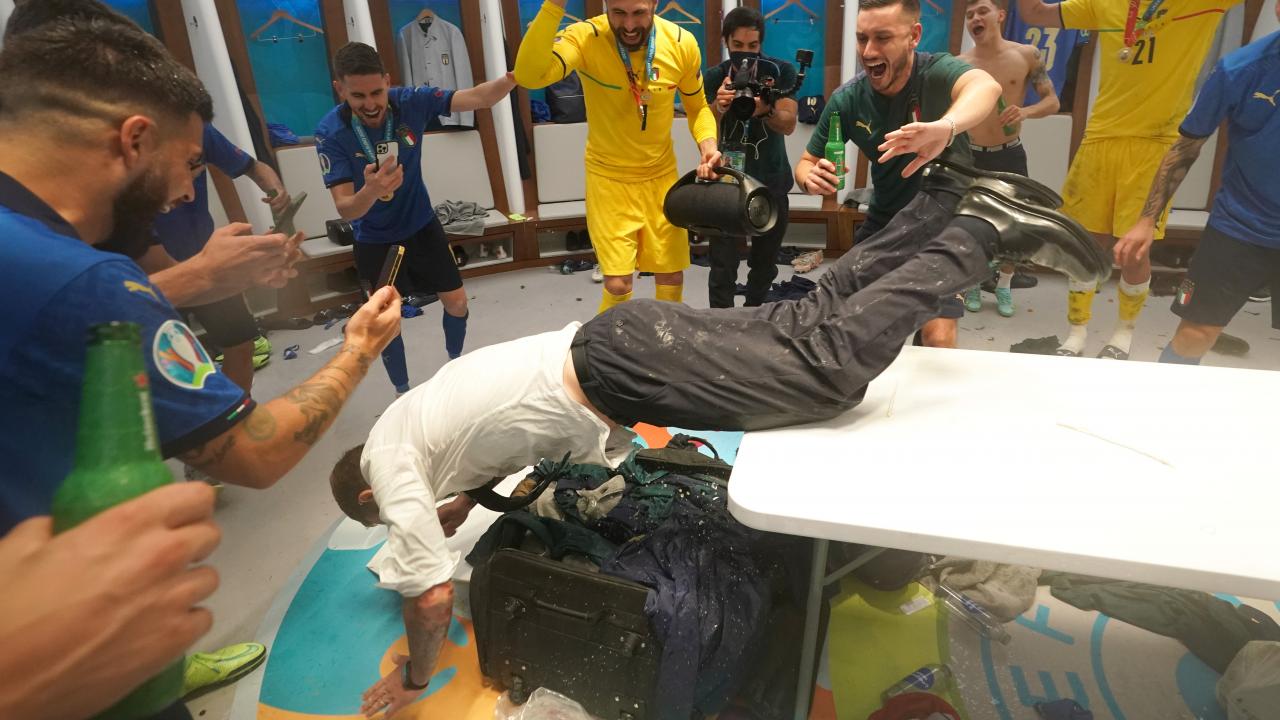 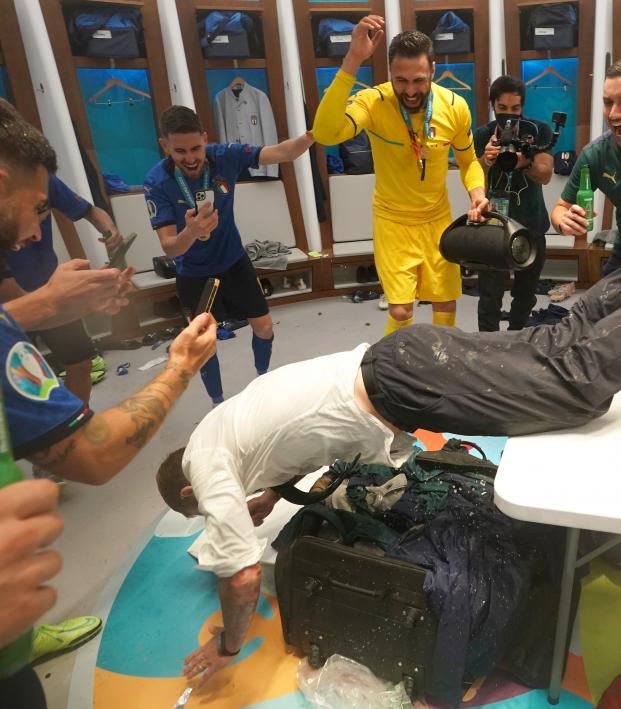 Following the Euro 2020 final where Italy narrowly defeated England on penalties, both sides displayed the true highs and lows of soccer.

Italians were put on top of the world as they secured just their second-ever European Championship and first since 1968. From their fans pouring onto the streets and erupting in joy to Italy’s team stripping down to tighty whities, Italians made sure to properly celebrate the moment.

But the spectrum of reactions following the Euro 2020 final from both squads and their fans couldn't have been further apart.

The celebrations from the Italian side brought on many laughs, starting with Ciro Immobile’s dive of the tournament. In unison with the team, as they slid on the pitch in celebration, Immobile's shorts got caught on the grass, exposing his buttcheeks to the world.

Immobile created quite the hilarious spectacle as he scurried to pull up his pants to catch up with the rest of the squad. The no pants theme continued as the festivities grew, this time with Andrea Belotti found in his underwear giving away his kit to a fan.

The Italian celebration became even more R-rated inside the locker room as the theme of no clothes evolved further. As champagne rained down like a monsoon and assistant coach Daniele De Rossi body surfed the tables, the Italian football team properly celebrated. Some even got too comfy, as center back Francesco Acerbi stripped all the way down to just his tighty whities and worked his hips like he was Shakira and it was the 2010 World Cup all over again.

I don’t think anyone celebrated as hard as him. While most of his teammates were fully clothed and spraying champagne, he was on top of the table shaking what his mother gave him. You have to respect it though — he might look completely ridiculous but he is celebrating how he wants to and doesn’t care about anything else.

As exciting as the time was, they didn't forget about who helped them get there. They made sure Leonardo Spinazzola was included in the party, as he was a key part of the championship run before suffering an untimely injury. Even though he was confined to his walkers, assistant coach De Rossi carried him around on his back through the celebrations.

Daniele De Rossi made sure injured Spinazzola wasn't left out of the celebrations pic.twitter.com/HILOFeLRch

While the Italian group celebrated their hearts out in the locker room, the scene in Rome was a similar story. Flares, flags and chaos reigned supreme as Italian fans took to the streets for their festivities. It looked as if the world was ending in complete chaos as the fans boasted over their new championship.

Italy has beaten England in the Euro 2020 final, and look at the celebration! #9WWOS #Euro2020 pic.twitter.com/B4p0ZapYll

As one side partied liked the world was ending, another nation went home in utter disappointment.

Bukayo Saka displayed tremendous courage and played excellently throughout the tournament. Unfortunately, he was the last one to have his penalty saved, securing the Italian victory. In the lowest moment of his young career, Gareth Southgate comforted him as he became an emotional wreck. In this powerful and passionate video, you can easily see how emotional Saka was as he covered his face with his shirt while Southgate embraced him.

Celebration videos always appropriately display just how much this game means to fans and players, but videos exhibiting the raw emotions of someone who just was defeated better accurately illuminate the power of sports.

The English players showed pure class after their loss, while the English fans exhibited the complete opposite. As if losing one of the biggest matches of your life isn't bad enough for one day, some English players who stepped up and took a penalty were racially attacked following the loss.

From disgusting social media posts to physical damage, English fans showed again why they aren't worthy of a championship. The fans might want to take some cues from their players, as even after such a devastating loss Englishman Jack Grealish took the time to make a young fans' day.

After a devastating loss in the #EURO2020 final, England's Jack Grealish still took time for this young fan @ESPNFC

The Football Association has already condemned the actions of the racist fans who took to social media to attack the players following the loss. Even police investigations have started and a few fans have already been banned from future competitions. The despicable actions from the fans increased from social media attacks to physical attacks on property.

Marcus Rashford had a public mural of himself defaced after he missed his penalty in the loss. Even though he has done tons of humanitarian work, helping extend student free lunch vouchers for millions of kids, he's still a target for the racist abuse spewing from the salty English fans.

But in an event that can help save English fans from being written off as completely horrible, people covered up the destruction of the mural with positive notes and messages. This small effort will go a long way as the action is just as powerful as the positive messages being written over it.

As an athlete and even as a fan it is completely understandable for your emotions to get better of you within a sporting event. But some of the behavior resulting from England's loss and the actions that followed have zero place within sports. It takes away from the success and the triumphant moment on the other side. As we should be highlighting the Italian squad and their dominant run, we are instead hearing about racist attacks from the English fans.

After the Euro final the Italians earned their right to strip and celebrate; meanwhile the English fans need to work on losing with class and being gracious in defeat.