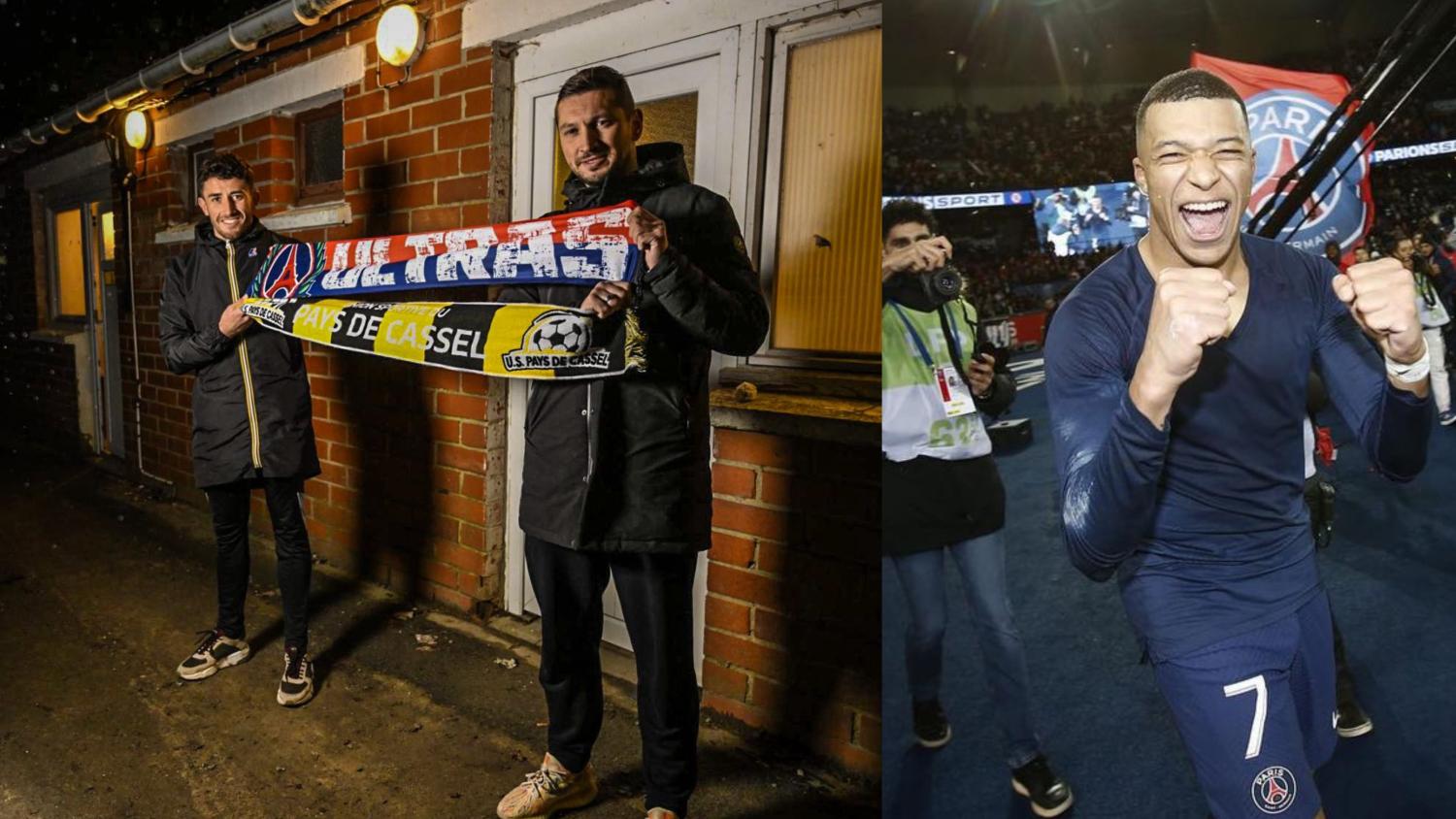 “Do I tackle him? He has to play against Bayern Munich.”
Kylian Mbappé | Instagram

Early stages of domestic cup play are consistently giving us unusual and peculiar moments we aren’t used to seeing in the professional scene: stadiums that hold less than 5,000 people, dressing rooms the size of a bathroom, players getting the chance to meet and play against their idols, etc.

Well, when PSG plays sixth-tier Pays de Cassel in the Coupe de France on Monday, the conflicts of interest might just be bigger than you average player-meets-idol story.

When we talk about unusual and peculiar moments in cup competitions, this is what we mean.

PSG faces Pays de Cassel this Monday in the Coupe de France round of 32 and although the odds of us seeing a game that's anything more than a one-sided masacre for the French champions are slim, one interesting aspect of this matchup will be seeing part-time players face the team they’re full-time fans of.

Alexis Zmijak, Pays de Cassel captain, is a 34-year-old electrician who, besides playing right-back on weekends, considers himself a loyal PSG fan that attends most home games as part of their Ultras group. Clément Boudjema, midfielder, is also part of a PSG Ultra group.

You’re cheering on your team one week and you’re playing against them the next.

Zmijak has expressed his mixture of emotions heading into the match, saying he’s conflicted over whether or not to tackle Mbappé if it means he could miss the upcoming Champions League match against Bayern Munich in February.

"If Mbappé goes on goal, do I tackle him or not? Do I say to myself: wait, he must play Bayern in the UCL soon?" said Zmijak in an interview with Le Parisien.

Their captain Alexis Zmijak is a PSG ultra: "If Mbappé goes on goal, do I tackle him or not? Do I say to myself: wait, he must play Bayern in the UCL soon?" (1/2) pic.twitter.com/J4AdZiDpnG

"It's a strange feeling to be fighting on the field now against the players I watched from the stands and cheered on. I couldn't have imagined it. We lost our minds when the draw was made,” he added.

Yes, all of this was actually said.

Going into the match and factoring in every quote from the club captain, people have become skeptical over how this affects certain players in the actual game. Will they let PSG score? Will they actually think twice about tackling Mbappé in a 50/50?

The club should terminate his contract

Lool is he supposed to be saying this?

What are these standards???

I have one answer for you: probably not.

These players are playing the biggest match of their careers against Ballon d’Or contenders and World Cup winners. As lower-tier professionals, they've waited all their careers for a chance to play on the biggest stage and there should ultimately be no reason why we don’t see every player leave everything on the pitch.

Although PSG will probably end the game within the first 30 minutes with the likes of Neymar and Mbappé projected to start, I’m sure we’ll get instances where the Pays de Cassel players make valiant efforts to get into the game and on the scoresheet. Millions are watching you play against the best, why not go for it?

Jean-Jacques Vaesken (President of the Pays de Cassel): “Playing against PSG in the Coupe de France? My players cried tears of joy, it’s something magnificent for them and for us. This is the game of our lives.” ️❤️ [via @le_Parisien] pic.twitter.com/0wEe6kMlR4