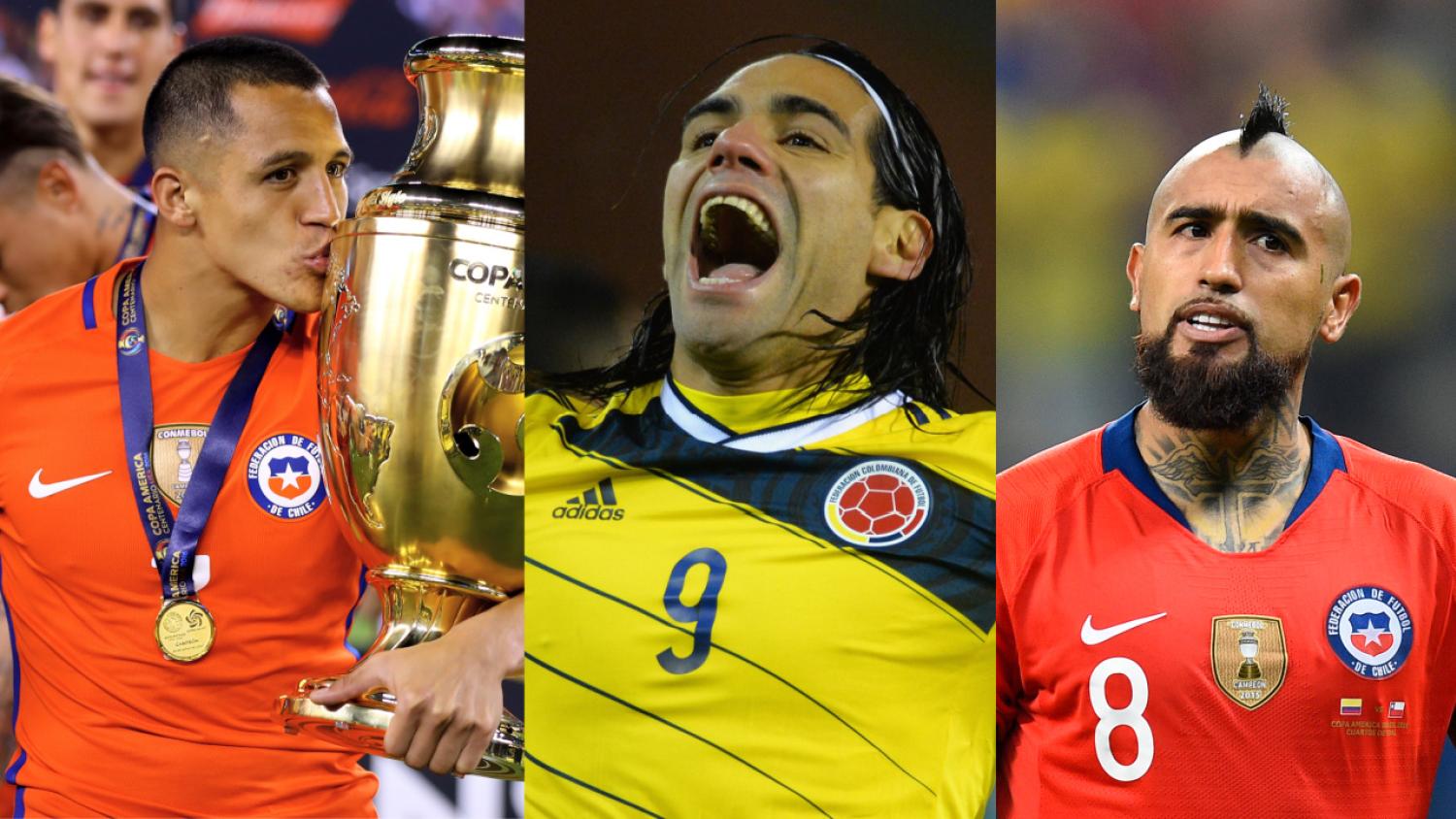 With a 2-0 victory over Paraguay in Lima on Tuesday night, Peru clinched fifth place in CONMEBOL World Cup qualifying and a spot in the inter-confederation playoffs, knocking out sixth-place Colombia and seventh-place Chile in the process. This marks the end of the road for a couple memorable generations of players for Los Cafeteros and La Roja.

These giants can not come again, so we reminisce over their most memorable international moments.

The 2014 World Cup in Brazil was supposed to be Falcao's. He'd become one of Europe's most feared strikers after dominating in back-to-back seasons with Atlético Madrid, and his form at the international level was just as good. Colombia hadn't qualified for a World Cup since 1998, but Los Cafeteros finished second in CONMEBOL with Falcao finishing joint-third in scoring across South America.

Then, with the tournament less than five months away, disaster: Falcao suffered a severe ACL injury that devastated his countrymen and cruelly ended a personal dream. A furious comeback was attempted with the world supporting him, but in the end, Falcao recognized he wasn't anywhere near his desired level and unselfishly decided not to take up a spot on the 23-man roster.

Although Falcao never quite returned to his previous heights, he recaptured some of his form with Monaco, worked his way back into the team on the road to the 2018 World Cup — including an equalizing goal against Brazil at El Metro — and made Colombia's squad for the finals in Russia.

"I've battled and worked for this for so long," Falcao said before the event. "I've often pictured myself scoring at the World Cup. I couldn't tell you how many times but it's a lot."

Falcao captained the side and finally got his first World Cup goal against Poland in Colombia's 3-0 victory in Kazan. He was taken off in the 78th minute to a standing ovation.

"I think (Falcao's goal) is one of the greatest joys that we received tonight," Colombia manager José Pékerman said. "He is a symbol of the national team, a symbol of Colombian football."

I don't know the exact science of color psychology, but when you see a stadium awash in Colombia yellow like a noisy field of gold, and out on that hallowed green turf you see 11 players burning with a desirous madness like Kerouac's fabulous yellow Roman candles, then that sticks with you for a long time.

Everyone knew Colombia was without Falcao in 2014, but few could've predicted that in a tournament where Brazil, as the host country, was pegged as the great entertainers, it was Los Cafeteros who captivated the world with their imaginative play in the final third.

Juan Cuadrado's masterful wing play — where he frequently combined with James Rodríguez at attacking mid — was behind that. Cuadrado finished with the joint-most assists in the tournament (four) alongside All-Star Team selection Toni Kroos.

His preferred style was a flurry of step-overs and Cruyff turns that resulted in being the sixth-most fouled player at the tournament, and his subtle backheel assist for James' first goal in Brazil foreshadowed what was to come.

James Rodríguez is only 30, but his club career has already brought him to Al-Rayyan in Qatar so we really don't know if he'll be around come 2026.

Still, 2014 James Fever remains one of the most potent drugs on the market.

He wasn't a household name heading into the World Cup, but everyone started taking notice after Colombia ripped through the vaunted Greek defense 3-0 (James scoring once) before outshining the Ivory Coast's golden generation 2-1 (James scoring again). James Fever had its true outbreak during Colombia's group stage finale, a 4-1 smoking of Japan that ended with James snatching Maya Yoshida's soul before delicately chipping Eiji Kawashima.

The James Rodríguez’ goal against Japan at the 2014 World Cup was a thing of beauty.

The dummy and dunk is so smooth. pic.twitter.com/7bXnlwIUIr

The world was obsessed, and then we had a clash of South American rivals in the Round of 16 as Colombia met Uruguay. Twenty-eight minutes in, James — 25 yards out and with his back to goal — controlled a headed Cuadrado pass with his chest, instantly swiveled and cracked a left-footed volley that went crossbar down on a bewildered Fernando Muslera.

The goal stands as one of the most majestic long-range efforts in World Cup history.

Here is his sensational Puskas winning volley from the 2014 World Cup vs Uruguay!pic.twitter.com/LBym7zq12L

Special mention: I watch this assist to Cuadrado at the 2018 World Cup once a week. 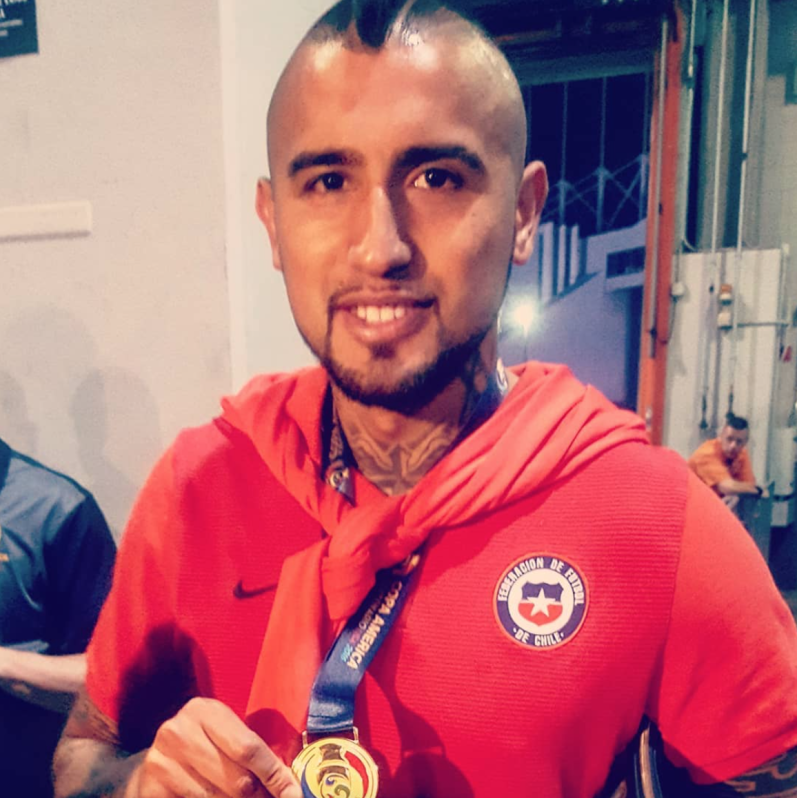 One way to understand how influential Arturo Vidal has been for Chile is the fact that he's often put next to Elías Figueroa as the greatest player in the country's history. Putting aside his erratic behavior off the pitch — yes, we all remember when he smashed his Ferrari, drunk, during the 2015 Copa América — nobody can doubt he's been the soul of La Roja.

His relentless spirit has always been there, and my favorite moment of him on the team goes way back to when he was a U-20 player. Just seconds after beating Brazil and qualifying for the 2007 U-20 World Cup in Canada, Vidal went to the cameras, saying, "Ahí quedó Brasil" ("and there is Brazil") with a natural impudence that basically kickstarted this golden generation.

El Niño Maravilla has a beautiful and vast collection of dribbles and goals to fire up Chileans' memories. No wonder he is actually their top scorer with 47 goals.

A proper compilation of his best moments with La Roja should include his tricks in a friendly against Sweden when he was just 17 years old, the time he destroyed England in Wembley or his recent masterclass against Bolivia in La Paz.

However, if you ask any Chilean for one unique moment to summarize Sánchez's career in the national team, there's only one possible answer: the Panenka penalty against Argentina in the 2015 Copa América Final, which became the first major international trophy in Chilean history.

The Pitbull wasn't blessed with the same stamina that let Vidal become one of the best box-to-box midfielders of the decade. He didn't have the skills to dribble opponents as Sánchez did, either. But, man, his stubbornness was unmatchable and helped him hide all of his shortcomings.

Medel established himself as La Roja's main center back despite being 5-7, and no matter how tall or strong the rival, he always went for the ball as his life depended on it. Even in the air.

The game that best displays Medel's pride is the one against Brazil in the 2014 World Cup Round of 16. The Pitbull tore his left thigh before the game but asked Jorge Sampaoli to play anyway.

And so with several layers of bandages, Medel gave one of his best performances until he was replaced in extra time. La Roja was very close to winning the game, but a shot hit the bar in the 119th minute and a bad round of PKs crushed the dream.