A Look Into The CONMEBOL Qualifiers: What Does Each Country Need To Make The Next World Cup?

Luis Vidal March 23, 2022
The next six days are going to be riveting and cruel.

Last stop in the CONMEBOL qualifiers, and there are still a few spots for the 2022 World Cup up for grabs. Brazil and Argentina are already on the plane, while Ecuador, Uruguay, Perú, Chile and Colombia are still fighting for two direct tickets and one inter-confederation playoff slot.

What do they need to fulfill their dreams? Here we have a guide with the results that could send them to Qatar.

CONMEBOL Standings — What Every Country Needs To Qualify 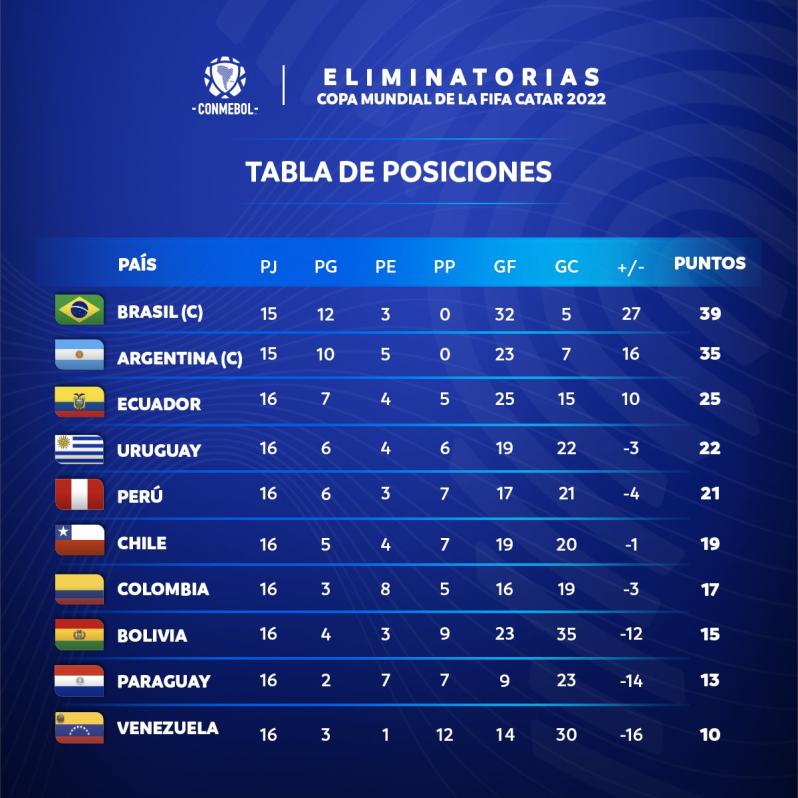 At this stage, Tite is trying to decide who is going to Qatar with him and Neymar. Competition is tough in the Scratch, so it will be very entertaining to see how the players will try to convince them.

After missing the last round of games per an agreement with PSG, Lionel Messi is back in the only place where he feels loved. And that's the goal for these games: Snuggling him, nuzzling him, hugging him and making him feel important.

It is hard to imagine a world where Ecuador is not making the cut. La Tri could go to Qatar even losing both games because the three teams behind them (Uruguay, Perú and Chile) are basically killing each other. In any case, one mere point would be sufficient to avoid unnecessary suffering.

Los Charrúas will have a direct ticket to Qatar if they defeat Perú and Chile fails to get three points from Brazil. In the case of a draw, they will secure the inter-confederation playoff only if Chile loses. What if Perú beats them? Everything will be decided in the last qualifying game against Chile in Santiago.

If they win both games, Qatar is in the bag. In that scenario, they will surpass Uruguay, and there will not be a need for suffering. On the other hand, getting three or four points leaves everything to math and odds. A draw against Uruguay and a victory over Paraguay could mean a direct qualification to Qatar (if Chile defeats Uruguay) or at least a spot in the inter-confederation playoff (if Uruguay wins against Chile). If Perú only beats Paraguay, it will secure the playoff spot only if Chile doesn't get six points.

The worst-case scenario? Getting fewer than three points. Here, the team will be in desperation mode, praying for really painful deaths for Chile and Colombia.

La Roja is not dead, but it needs an epic performance in the last two games. One to be sung about for ages, passing from generation to generation. Chile needs to defeat unbeaten Brazil in Brazil, then Uruguay at home, and hope Perú misses a couple of points to grab those tickets to Qatar. If Perú gets six points, the two victories will only earn Chile the playoff berth.

In the case of getting three or four points total, Chile still can dream of the playoff spot, but only if Perú or Uruguay collapse in their last two games.

From the epic narrative, we now go to the land of miracles. If Colombia wants a chance for the playoff berth — the only option on the table for them — they need to collect the whole six points in the last two games and then cross their fingers. Perú failing catastrophically would be welcomed, but there are a few other factors involved — Chile, goal difference, etc. — in this kind of Colombian Ave María. They will also need to score a goal, something they haven't done in the last six qualifier games.

Look, numerically speaking, Bolivia can still reach the playoff ticket to Qatar. But realistically, those chances are not even in the hands of God (if you believe in one). Can you imagine a world where Bolivia gets the six points, beating their rivals by more than seven goals, and where Perú, Chile and Colombia vanish from the Earth?

After seven games failing to score, la Albirroja sank to the bottom of the table and has no chance at all of going to Qatar. The complete cycle was a disaster. See you in the next qualifier.

La Vinotinto at this point is rebuilding for the next cycle with José Luis Pekerman as head coach.

* All games are broadcasted through FuboTV