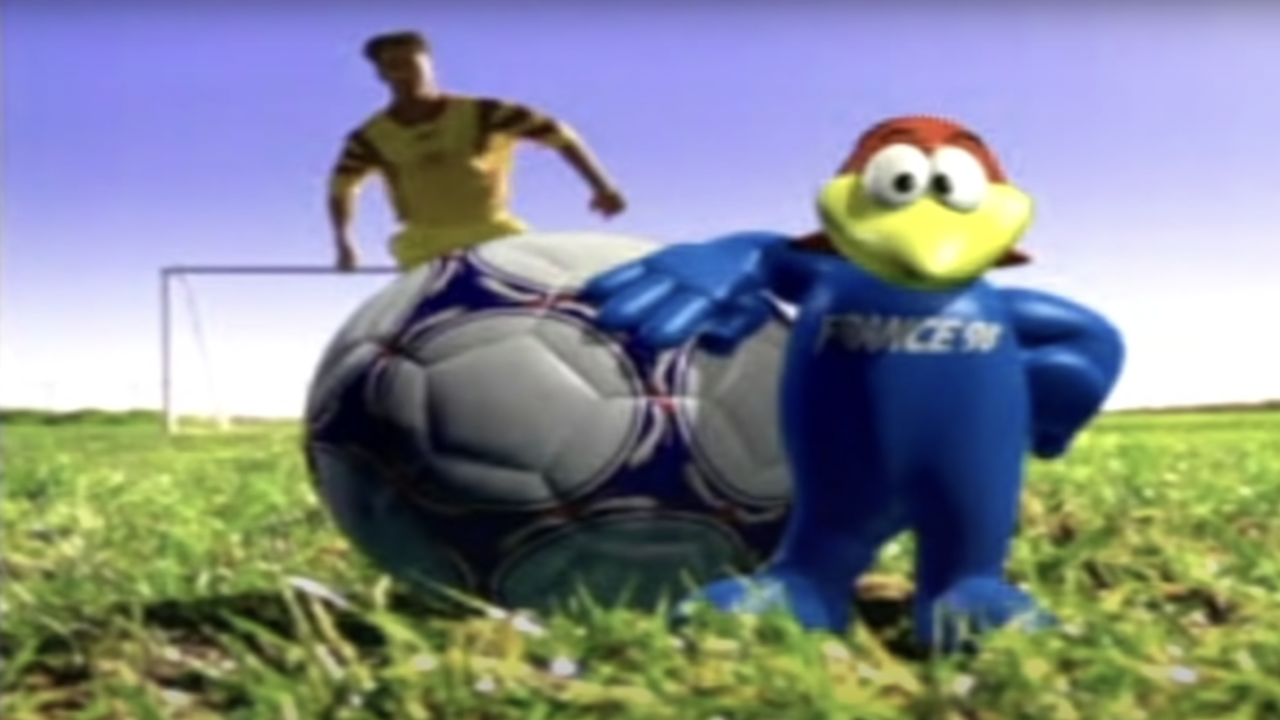 A Tribute To The Greatest FIFA Intro Song Of All Time

A full-kit wanker in all yellow appears from off screen at a dead sprint.

The man’s heading straight for the unsuspecting bird.

“I get knocked DOWN.”

With all the verve a late-90s Brit Pop song could possibly muster, Chumbawamba’s “Tubthumping” slams you straight into the action.

If you’re not ready to play a highly pixelated, 3D approximation of the beautiful game now, you might need to check your pulse.

“You’re never gonna keep me down.”

Exactly 24 years ago today (May 19, 2022), EA Sports’ first FIFA-licensed World Cup video game came to North American shores. “World Cup 98” wasn’t the best soccer game — the controls were loose and the animations janky — but you’d be hard pressed to find a more memorable introduction to a FIFA video game. (FIFA had licensed World Cup games before, but this was the first developed by EA Sports, which would become synonymous with soccer video games, though sadly FIFA and EA will soon part ways.)

For a series that’s become synonymous with indie hits, it really all started with one of the more obnoxious pop hits of the 90s.

Chumbawamba was an anarcho-communist punk band formed in Burnley in 1982 that never really achieved much mainstream acclaim. Then, out of nowhere, they released “Tubthumping,” a poppy drinking anthem.

The song skyrocketed to No. 2 on the UK singles chart and reached No. 6 in the U.S. Billboard Hot 100, plus No. 1 in many charts around the globe. It was everywhere in the late 90s, despite lyrics focused on drinking whiskey, vodka, lager and cider, and despite the fact what few lyrics there are get repeated over and over for more than three minutes.

Back in the 90s, video games did not license music. Sports games especially had non-descript, 16-bit background music and, if you were lucky, the intro song to a league’s TV coverage. (I still hear the music that played during games of the 1994 hit “Ken Griffey Jr. Presents Major League Baseball” when I fall asleep many nights and can conjure the intro song to NHL ’94 in an instant. No, you have a problem.) When FIFA 98 came out, it featured Blur’s hit “Song 2,” the first licensed track in any FIFA game.

A few months later (depending on where in the world you were), when you booted up “World Cup 98” for the first time and heard the same pop smash hit you’ve been hearing on the radio for months, you felt like video games had really made it.

After the initial scenes of the bird and the ball — the rooster, named Footix, was the official mascot of the 98 World Cup and the tricolore was the official ball — the game’s intro relies heavily on the music to carry you through. Unlike some magnificent FIFA intros focused on the beautiful game, this is all about the cheapest possible production to make it seem like you didn’t get ripped off at the local Electronics Boutique. It’s abundantly clear, the entire budget for the intro was blown on securing the rights to “Tubthumping.”

Awful B-roll footage is supplemented with Footix flying around parts of France (host of the 98 World Cup) with quick cuts to prevent anyone from analyzing what they’re looking at too closely. By the day’s standards, the in-game graphics were fine, but they weren’t anything groundbreaking. Seeing official national team kits, however, was a big deal, something that had never been done before.

By the time Footix flies into what I assume is supposed to be the Parc des Princes, you’re ready to skip what’s left of the intro and get into the action, but you’ll be singing (when you’re winning) for the rest of the day.

Pissing The Night Away

These days, you expect to hear a popular song when you load up any sports video game. EA Sports has consistently churned out incredible soundtracks to its soccer games.

From there, FIFA moved into more indie rock and by the 2010s the annual FIFA release was anticipated not just for its roster updates and minor gameplay tweaks but for its new playlist as well, which featured some of the best new indie music from around the world. I first heard many of my favorite bands while playing FIFA.

Officially, the 1998 FIFA World Cup anthem was “The Cup of Life” by Ricky Martin. But anyone old enough to hold a controller in the late 90s will tell you it was “Tubthumping.”