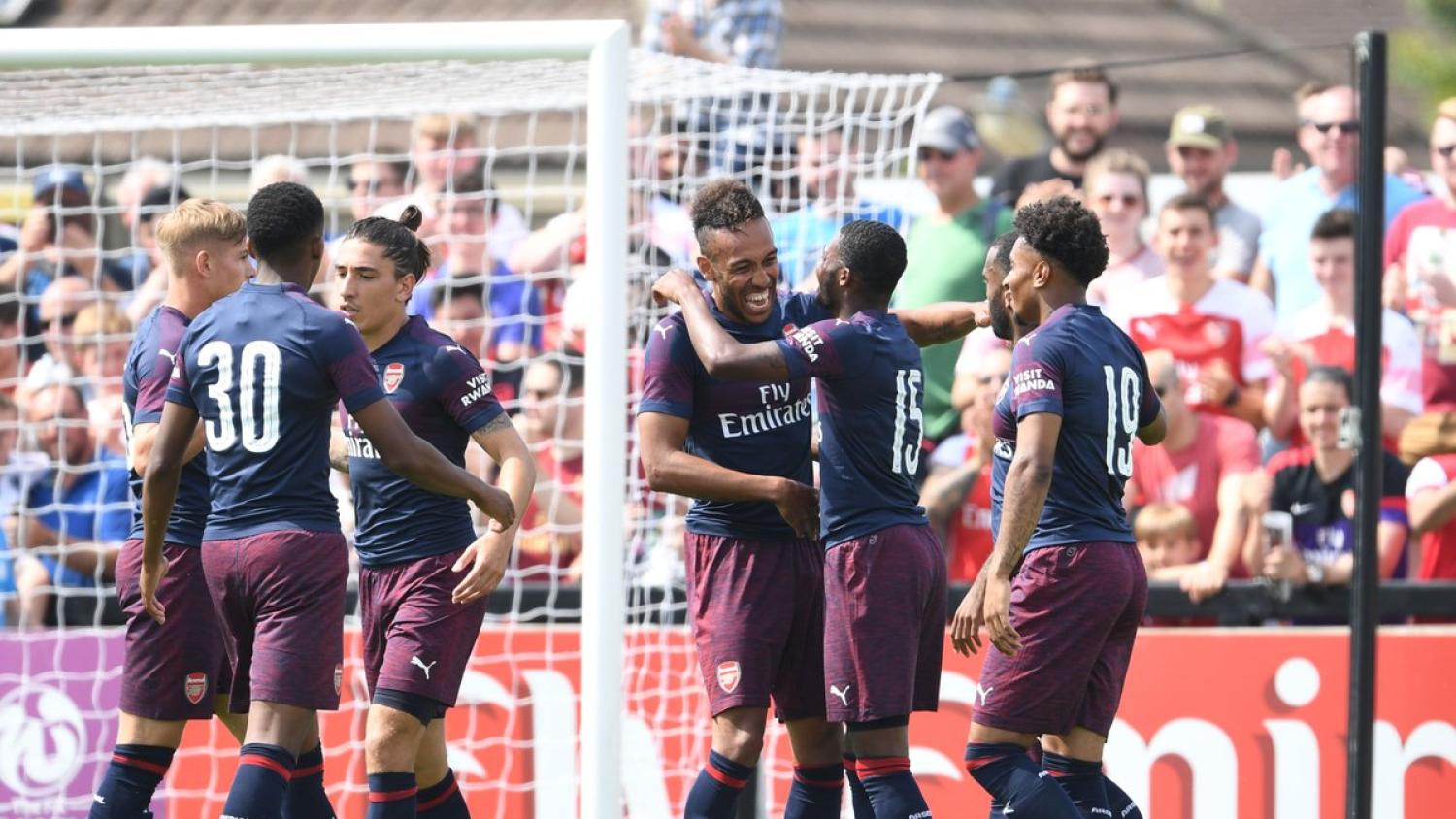 Unai Emery made his debut on the Arsenal bench as the Gunners routed Boreham Wood 8-0 on Saturday at Meadow Park in London. The match kicked off at the same time as the England-Belgium World Cup third-place match, but the Emery Arsenal debut provided far more action than the Three Lions in Russia.

Boreham Wood, a club from England’s fifth tier, didn’t provide too much resistance to the Premier League’s sixth-place team from last season. Pierre-Emerick Aubameyang scored a hat trick just over 16 minutes in, scoring three goals in a 10-minute span.

The Gunners looked sharp with a kit that looked like something Texas A&M would wear.

Our starting XI for @UnaiEmery_'s first game in text:

It didn’t take long for the Unai Emery Arsenal debut to get off to a flying start thanks to Aubameyang. The former Borussia Dortmund striker curled in a beauty in the seventh minute to send the Gunners on their way.

The first goal of the @UnaiEmery_ era has arrived - and it's pure  from @Aubameyang7#UnaiBegins pic.twitter.com/LHuyMT6Smz

Two minutes later Aubameyang doubled his tally, heading in a cross from Maitland-Niles, who admittedly did all the hard work.

#YoPierre, give us a chance to keep up! @Aubameyang7 has his second - and what an assist from @Ains_7 #UnaiBegins

And just over 16 minutes into the match Aubameyang completed his hat trick with a penalty kick he blasted into the top left corner.

16 minutes and seven seconds into our first game of pre-season... and @Aubameyang7 has a hat-trick

But the Gunners weren’t done in the Emery Arsenal debut.

Reiss Nelson made it 4-0 in the 35th minute, calmly chesting the ball down from a deflected cross and volleying home before the ball could touch the ground.

Oh @ReissNelson9, that was special

It was 5-0 before the half when Lacazette finished a punishing counterattack in the 40th minute. The finish was assured, but the pass from Aubameyang was sublime.

The Gunners wasted no time in adding to the lead in the second half of the Emery Arsenal debut, going ahead 6-0 through Eddie Nketiah as the announcer lost count of how many goals had been poured in.

It didn't take @EddieNketiah9 long to make an impact

Arsenal added the extra point to the touchdown when Jeff Reine-Adelaide smashed one in from range.

Nketiah set up Mikhitaryan for the eighth in the 79th minute to finish off the scoring. Again though, it was all about the assist.

It's ! @HenrikhMkh finishes off the move but @EddieNketiah9, take a bow for that backheel assist

And just like Texas A&M, which plays Clemson and Alabama in the first four weeks with a new coach, Emery will need to get off to a fast start, just as he did on Saturday.