Real Madrid Is Finding Really Random Things To Brag About

Real Madrid, the 13-time champion of Europe, is apparently struggling to find new ways to brag about how great the club is.

As it turns out, a lot of you footie fans are doing the Google to search things related to one club more than any other. The club in question isn’t really a surprise, nor is the fact said club is celebrating its status as the most-searched soccer team in the world.

The most searched for team on the internet |

Yes, Real Madrid, the back-to-back-to-back Champions League winner, the team that until recently possessed the most well known player in the world, is the most-searched team in the world of football. Who ever would have thought it?

Unfortunately, the club’s English-language website forgot to use spellcheck before publishing the story.

Ahh well, you can’t win them all. Too much time focusing on prying the LaLiga crown from Barcelona, not enough spent editing. Priorities.

According (not acccording) to JD Sport, the next most-searched teams include English Premier League sides Arsenal, Manchester United and Liverpool and then archrival Barcelona. Juventus is first in Italy, but that could grow in the coming years with Cristiano Ronaldo now a member.

Real Madrid also would like you to know it’s the most-searched team in European countries outside of Spain, including Switzerland, Russia, Croatia, Serbia, Romania and Lithuania. This also might change once fans catch wind of the new Rostov uniforms. 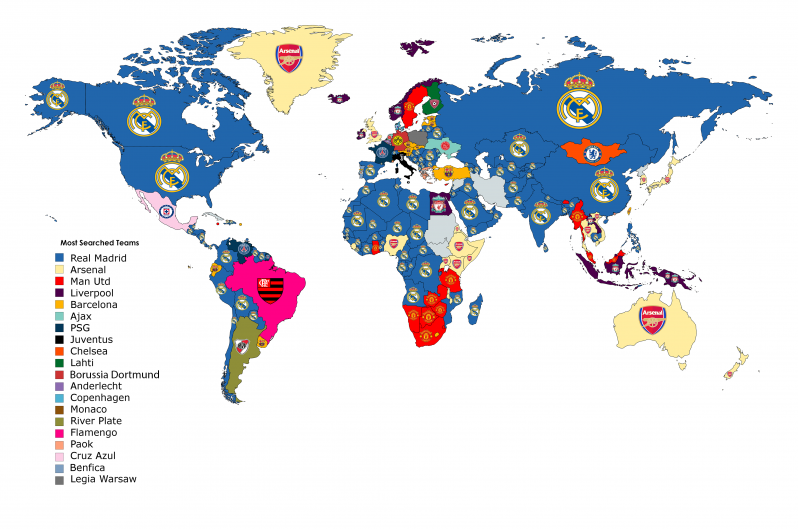 The above map shows just how much Real Madrid dominates throughout the world. But look at Arsenal, dominating in Greenland and Australia, the two biggest soccer meccas in the world. To be honest though, it's a bit surprising Barcelona isn't as popular of a search topic throughout the world. Perhaps that's because the club is a bit more settled these days with few big transfer or coaching rumors grabbing headlines.

Does any of this matter? Not really. It shows the Spanish side is super popular, but that doesn't mean anything on the pitch for a team that hasn't made a huge signing in years. Truthfully, this article is just designed to catch a few of the fans who search "Real Madrid" on Google and drive traffic back to the best soccer site on the planet — probably the universe, though we can't independently confirm that.