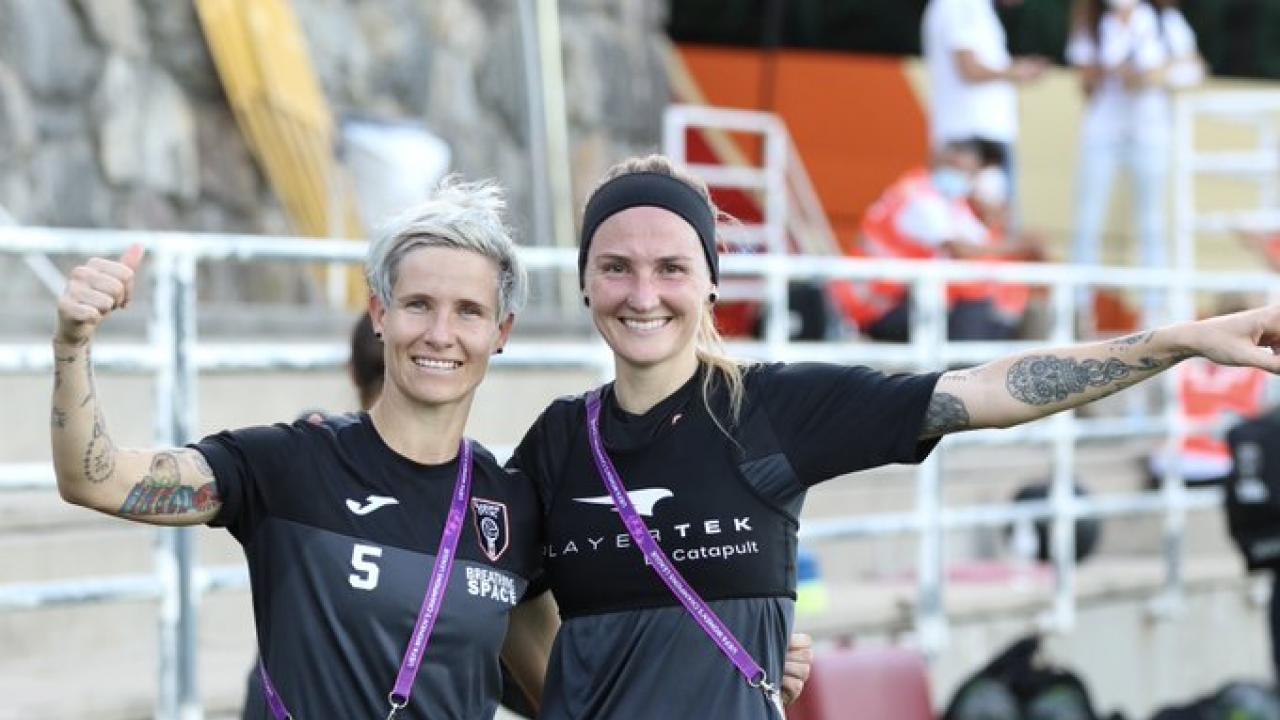 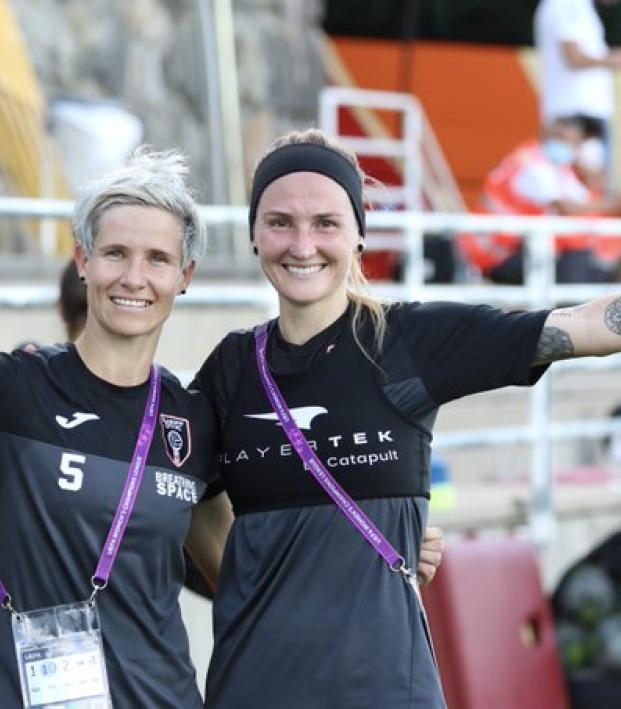 Connor Fleming August 21, 2020
Freda is currently on loan at Glasgow City and in the quarterfinals of the UWCL.

The 2019-20 UEFA Women’s Champions League continued on Friday with the quarterfinals following a suspension of play that had put the competition on hold since Halloween. Like the men’s side, the tournament was changed to a single-leg format with all the matches being played behind closed doors in Bilbao and San Sebastián, Spain.

One of the clubs competing at this stage is Scotland’s Glasgow City, the only remaining part-time team in the Champions League. Remarkably, Glasgow City includes three Americans on its roster — Zaneta Wyne, Sharon Wojcik and striker Krystyna Freda.

The 26-year-old Freda is an experienced Champions League player having finished the 2018-19 campaign with seven goals for Cyprus’ Barcelona FA. Only Wolfsburg’s Pernille Harder, the 2018 UEFA Women’s Player of the Year, scored more.

Now on loan at Glasgow City, Freda’s opponent in the quarterfinals on Friday was Harder’s Wolfsburg, and The18 chatted briefly with the Winthrop University standout before the game.

The18: First off, what’s the atmosphere like in San Sebastián? How are you and your teammates holding up and keeping busy?

Krystyna Freda: The atmosphere in San Sebastián is fantastic. We're staying in the most amazing hotel, and everyone is just so excited to be here. We're not allowed to leave the hotel except for sanctioned walks with the team, but we're pretty busy between team meetings, meals and, of course, bits of relaxation!

The18: What has Glasgow City’s preparation for this match been like in spite of everything?

KF: I’ll be honest, preparation was tough. We've had to squeeze a normal preseason into the span of about a month and a half, which has been brutal on our bodies. We started out with non-contact training for a couple of weeks, and then into contact which meant once-a-week COVID testing.

We were lucky to get in two friendly matches with things being the way they are. We would have liked some more but we have to take what we can get in these difficult times. But going into these games we feel well prepared and ready for the big game!

The18: Following along stateside, it’s wild to see you and two other Americans on this side in the quarterfinals. Has it been nice having Zaneta Wyne and Sharon Wojcik in the squad? Had you met them before?

KF: It's been really nice having some fellow Americans on the squad! It is awesome to see American players playing abroad and at such a high level, because many American players stay in the U.S. with NWSL teams and don't realize that there are so many opportunities abroad. I'd never met Zaneta or Sharon before coming to GCFC, but we got on great right from the start! We enjoy making fun of some of the Scottish phrases.

The18: What about being a teammate with Janine van Wyk, who’s an absolute legend both on and off the pitch? Have you had much time to speak with her?

KF: Janine is fantastic. She's such a leader on and off of the field and a great addition to the squad. Since the first day we met we got along great and we have similar mentalities so it's great to have her here.

The18: How’d you end up with Glasgow City (what are the terms of your loan from Apollon)? You played and scored against City in last season’s Round of 32, did that open the door to the move in some way?

KF: The move to GCFC was interesting because it was very quick and out of the blue. My agent knows (Glasgow City manager) Scott Booth and they were chatting and the opportunity just came up! Scott knew who I was from the game I played against them and liked the way I played and thought I would fit into the squad well.

I am so grateful that he took the chance to bring me here because I have enjoyed every minute of it. I am also so grateful to the President of Apollon Ladies, Andreas Marangos, for allowing me the opportunity to go on loan. After the UWCL Finals tournament I'll be heading back to Cyprus to rejoin Apollon Ladies and get started on next season's UWCL!

The18: Speaking of the Champions League, you were the second-leading scorer last season, sandwiched between Pernille Harder and Ada Hegerberg. Does that sort of achievement resonate with you when looking back on it?

KF: Honestly, not really. It's cool to look back at it like that, but for me it's more that I just went out and did a good job helping my team get as far as we could in the UWCL. Obviously it's great to see your name up there next to some of the biggest names in women's football, so now the challenge will be to do it on a bigger stage.

The18: Has Vlatko Andonovski reached out or made it known that he’s watching?

The18: I’d also like to ask you about this wave of USWNT players coming to Europe — some of it’s certainly down to the uncertainty of NWSL play amidst the coronavirus, but other players have also cited the draw of playing in the Champions League — has anyone reached out to you regarding your experience?

KF: No one has reached out to me, but I think it's amazing to see all of these players from the NWSL moving abroad. It's a great thing not just for them to keep playing, but for women's football in general to keep developing. Now you have players going abroad and learning different styles of play and bringing it back to the U.S., which is great for everyone.

I think it also just shows the draw of playing abroad and that there are good opportunities for female players outside of the U.S. The UWCL is obviously a big thing for players to take part in, so it's a good tool for teams to use to sign some of these big name players.

The18: Having played in the UWS and NWSL, what’s the biggest difference or the most demanding aspect about playing in Europe vs. America?

KF: I would say the biggest difference for me from the U.S. to Europe is just that in Europe football is so much more popular and everyone follows it, even the women's teams. The football culture is so drastically different and it's amazing to be in countries where people eat, sleep and breathe football.

There is so much more going on in Europe as well, like the UWCL, that is such an exciting factor because instead of just playing your season to be a champion and that is the end of it, you are playing for a spot to compete against the best teams in Europe.

The18: What’s your advice for players that are looking to follow in your footsteps and play abroad?

KF: DO IT. There are so many opportunities for players to play abroad and they don't even realize it. I have had so many conversations with players asking me "How did I get on a team abroad," and "What is it like," and I realize that the reason most players don't do it is because they don't know how.

I want to see more players going abroad in the future, and that's why I created my company World of Women's Soccer. It's a company BY players FOR players, because we realize the challenges of players trying to play abroad for the first, or even the second time.

Many players think you also need an agent, but you don't need one if you don't want one. There are ways you can get on teams if you are determined and put in the hard work. I want to help as many female football players as I can pursue their dream of playing football professionally, so I would tell them to not give up and, if you need any help, check out thelockerroom.worldwomenssoccer.com!