Is It Time To Pour One Out For Napoli?

Huw Thomas May 1, 2018
As Juventus snatch victory from the jaws of defeat and Napoli dramatically implode, is the Serie A title race dead and buried?

How quickly can a man go from hero to villain?

For Kalidou Koulibaly, it was less than ten minutes of actual game time. After scoring the winning goal against Juventus in the dying minutes, reviving Napoli’s floundering title challenge, he was sent off in the first five minutes of the next game away to Fiorentina, squandering any resurgent hopes by setting the scene for a 3-0 thrashing by the home side.

In the space of a week, with barely ten minutes of actual football being played, the Napoli center back has experienced the highest highs and the lowest lows.

Kalidou Koulibaly with a belter of a header to win the game in the 90th minute for Napoli. pic.twitter.com/0XH74V0T0i

Napoli a goal and a man down vs. Fiorentina at half-time. Koulibaly's red card (after VAR review) which might have given the title to Juventus #FiorentinaNapoli #SerieA pic.twitter.com/JVIzho5bNg

At the other end of the scale, Gonzalo Higuain went from ghosting around and floundering in Turin to helping put his side back on top. A week makes a lot of difference.

If you ever needed confirmation that the Serie A title race is the only real place for proper footballing drama, this season has confirmed it.

Last week, Juventus’s defeat was not well received among their fans. They were made to pay for a cowardly, defensive approach, trying to wring a draw from the visiting scudetto challengers, an approach which backfired in the final stages of the game.

In order to make their displeasure felt, the Juventus ultras visited the team’s training ground. There, they voiced their displeasure over the performance (in so many words) and demanded statements of commitment from the players. Winning the title was essential. Poor performances would not be tolerated.

This is from fans of a team who have won six titles in a row. A team who, despite the loss, was still top of the table by a point with four games remaining. One could say that the Juve fans have very high standards. Others might suggest that they are spectacularly entitled. Either way, the fans weren’t happy and wanted more.

The Derby D’Italia was the perfect occasion for this. Traveling to Milan to face Inter, one of Juve’s fiercest enemies, there was a huge amount on the line. This was the banana skin, one of the key matches put forward by Napoli fans as a place where Juve might drop points.

For Inter, chasing after the Champions League spots, it was a chance to steal a few points and move up into the top four. Both sides were desperate to win.

If anyone was in doubt about how much bad blood existed between the two clubs, the Inter supporters’ gesture before the game was telling. They planned five minutes of silence for all the teams who had been robbed by Juventus and their refereeing decisions over the years. A display of petty pretension, sure. But very funny.

To make matters worse, Juve scored early. A half-cleared corner fell to Juan Cuadrado, who floated in a ball to Douglas Costa. The Brazilian collected the ball and fired a smooth finish across goal. First blood to Juventus.

For the silent fans, their worst fears were realized in the 16th minute of the game. Matias Vecino lunged in on Mario Mandzukic. After initially showing a yellow card, the referee took another look via VAR. He changed his mind. Red card. The stadium erupted, screaming their displeasure towards the pitch. Another decision favors Juve in a big game. Typical.

Of course, the challenge had been particularly bad. Mandzukic shared an image after the game, revealing a horribly open wound which required internal and external stitches. It was a clear red card. The VAR and the referee had combined to make a correct decision.

Not that the Inter fans agreed.

The atmosphere quickly became poisonous. The game itself degenerated. Scraps and clashes broke out across the pitch. Inter, set to play the majority of the match with 10 men, tried their best to play football, but it was tough to get the ball back from Juve.

The champions began stroking the ball around the park, waiting for their opening. They were already in the lead, they didn’t need to work too hard.

But complacency has been a consistent problem for Juventus this year. Once again, they fell prey to the problem. Inter, who had been timid and fractious to this point, found a way through. A cheap free kick was knocked in by the right back, Joao Cancelo, finding Mauro Icardi. The Argentine is nothing if not merciless in front of goal. He leveled the score against the run of play.

The goal gave Inter confidence. Despite the man advantage, Inter suddenly started playing all the football. They were finding time and space where there had been none before. Juventus had no response. Their passes failed. Their organization was awful. Miralem Pjanic was lucky to stay on the pitch after a series of bad tackles.

The pressure built and built until Inter scored again. This time, it was a Andrea Barzagli own goal. The veteran defender turned a drilled cross into his own net. Juventus were their own worst enemy and the goal was a fine metaphor for their play to that point.

But Inter couldn’t keep up the intensity. As the game wore on, the difference in numbers began to tell. The Inter players seemed exhausted, unable to press and tackle as they had before. Any Napoli fans watching at home could feel their elation fading.

Then Juventus scored again. A Milan Skriniar own goal in the 86th minute. Fine, the Napoli fans must have thought. A draw is fine. Just get to the end Inter, please. Juventus dropping any points at all would put Napoli in pole position.

The third Juventus goal came three minutes later. The 89th minute. Davide Santon, on for the knackered Icardi, made a calamitous error and Higuaín, the former Napoli man, turned the ball into the net. Juventus had all three points. Inter were left stranded outside the Champions League spots. Every Napoli fan at home was cursing.

Unbelievable! From 2-1 down, Scudetto slipping out their reach to 3-2 ahead thanks to Gonzalo Higuaín #InterJuve pic.twitter.com/Z6IbcffzHR

The atmosphere inside San Siro, which had veered from joyous to poisonous with the swing of Inter’s fortunes, simply died. The fans were shell-shocked. The players furious and tired. Aside from a couple of late half-chances, the game finished without incident. 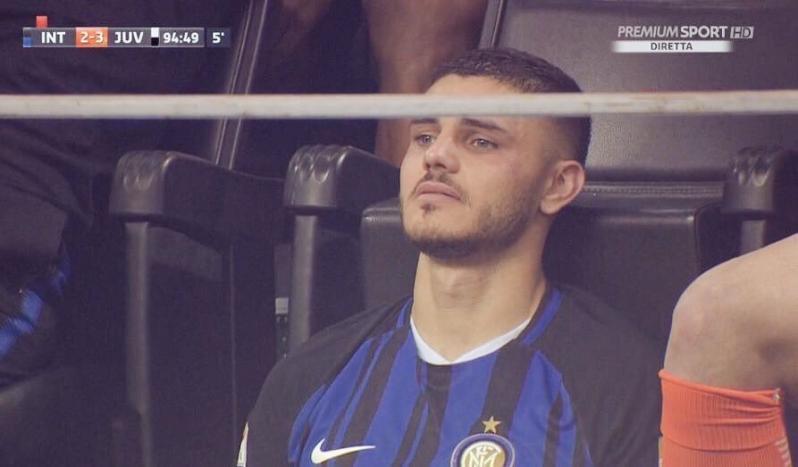 Icardi watches as Inter throw it all away. Photo: @skinniar | Twitter

Juventus came from behind to seize all three points. Top of the table, still.

It wasn’t just the Napoli fans who must have been cursing. The players, too, will surely have been watching. After their heroics the week before, the late brace from Juventus must have felt gut-wrenching.

Napoli were set to play Fiorentina the next day. If there’s any team in Italy who can claim to hate Juve as much as Inter or Napoli, it’s Fiorentina. And Torino. And Roma. Actually, there’s a lot of people who hate Juve, but Fiorentina are high up on the list.

If the team from Florence were to lose on Sunday, allowing Napoli to remain neck and neck with Juventus, let’s just say the Florentine fans would not have been furious.

To help Napoli, Fiorentina were struck by suspensions and injuries. The run of wins which had coincided with the death of captain Davide Astori had come to a halt against SPAL, Lazio — a match they lost 3-4 — and Sassuolo.

Napoli, on the other hand, had a full-strength team. As tired as they were, as exhausted as they had been by the long, arduous season with a thin squad, there were only four games left. Win those, hope Juve drop points (any points) and the title was theirs. The mission was clear.

This lasted all of five minutes.

Koulibaly was sent off early on. The referee had initially given a penalty and a yellow. He consulted the VAR and changed his mind to a free kick and a red. There’s no doubt Napoli would have preferred the former punishment.

From there, things went from bad to worse. Giovanni Simeone, Diego’s son, scored a hat-trick. 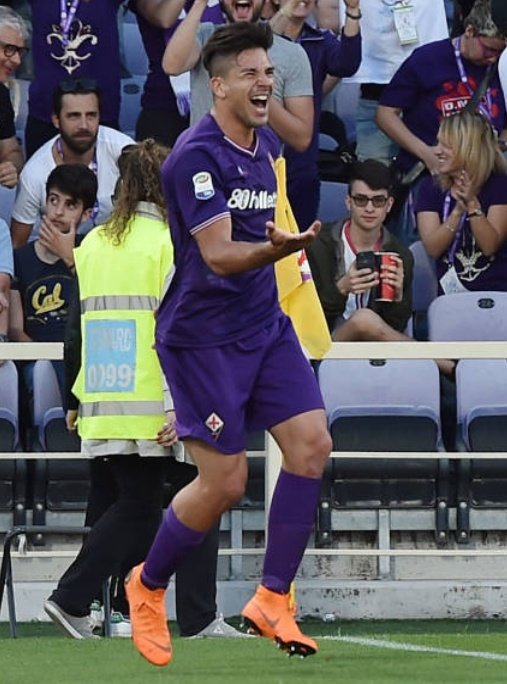 The goals came in the 33rd, 61st and the 92nd minute, perfectly spaced out to draw the maximum amount of heartbreak from the Napoli players and fans. This was an incredible implosion.

There’s no telling how much the events of the previous night affected the Napoli players.

Allan is disonsolate after defeat.

After seeing the ruthless, relentless Juventus snatch all three points in thrilling fashion, they must have been sick. If Inter had drawn or lost, Napoli could well have won, buoyed by the opportunity to move out in front.

This is what Juventus do. They’re masters at crushing hope, at grinding down any ambition and promise among their enemies and grinding it into a fine dust. They pulverize the optimism of the opponent. They shut out any shaft of hopeful light and leave their title-challengers squandering in the darkness. It’s not refereeing bias or match-fixing. It’s a mindset. It’s why they win so much. 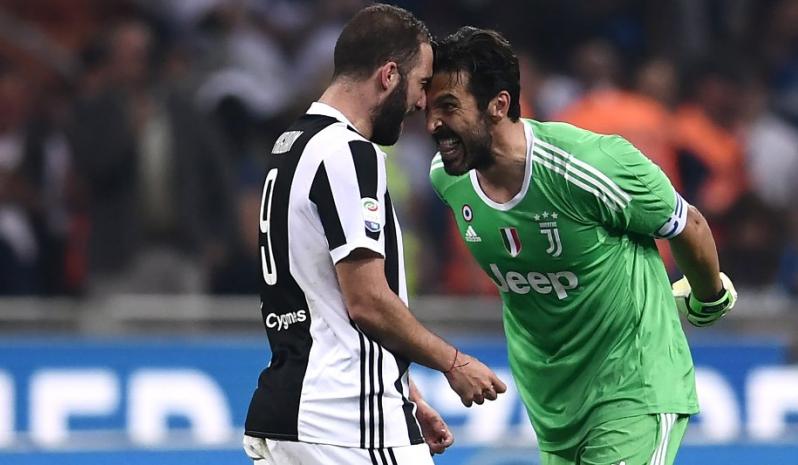 To all intents and purposes, the title challenge is practically over. Of course, we’re written that before. There’s three rounds left. Literally anything could happen, as we’ve already seen. Making predictions is a fool’s errand.

But it would be absolutely typical for Juventus to draw their next match (or even lose it) while Napoli snatch a late winner. This season has already made suckers of us all.

Having said that, it’s hard to quantify how utterly sickening a weekend this must have been for Napoli’s players, manager and fans. They are likely devastated. If they’re able to pick themselves up and go again after this, then Maurizio Sarri deserves far more credit than he’s already getting.

Surely there’s no coming back from this? Surely, this time, the title race is actually dead and buried? Surely Napoli can’t do it?

In a season of ridiculous twists and turns, we can only hope that there’s more revelations left to come.