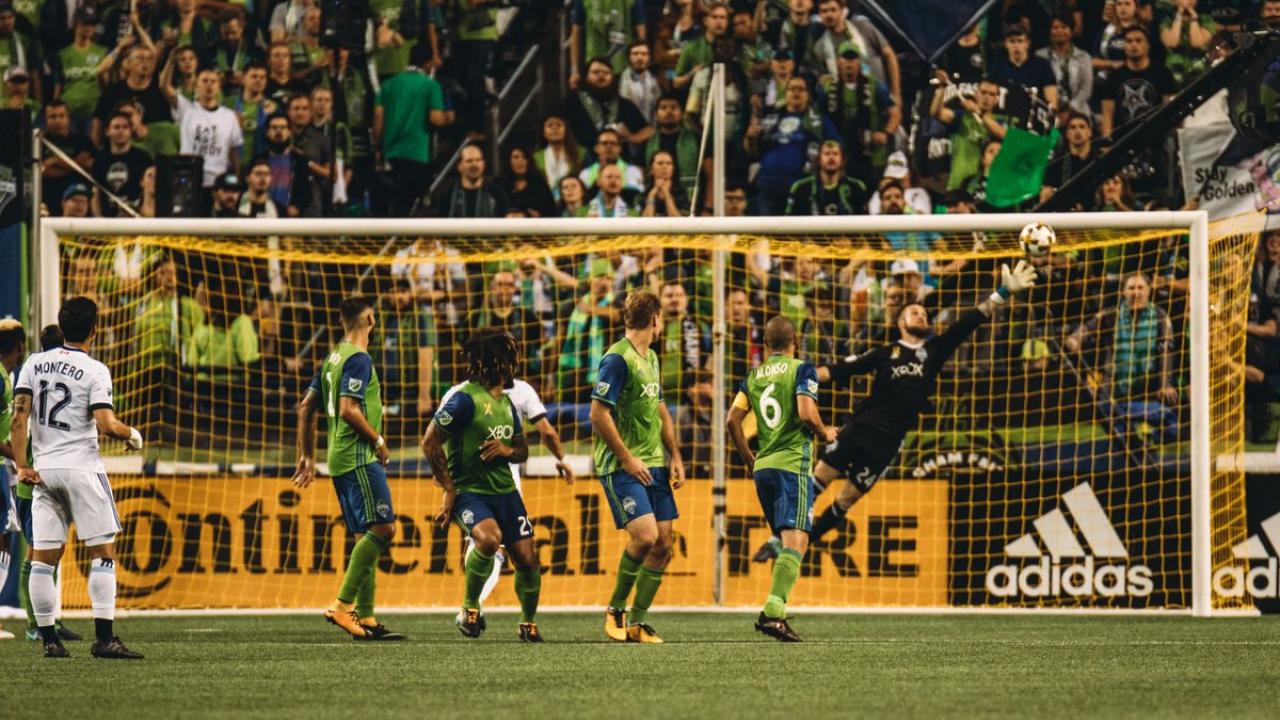 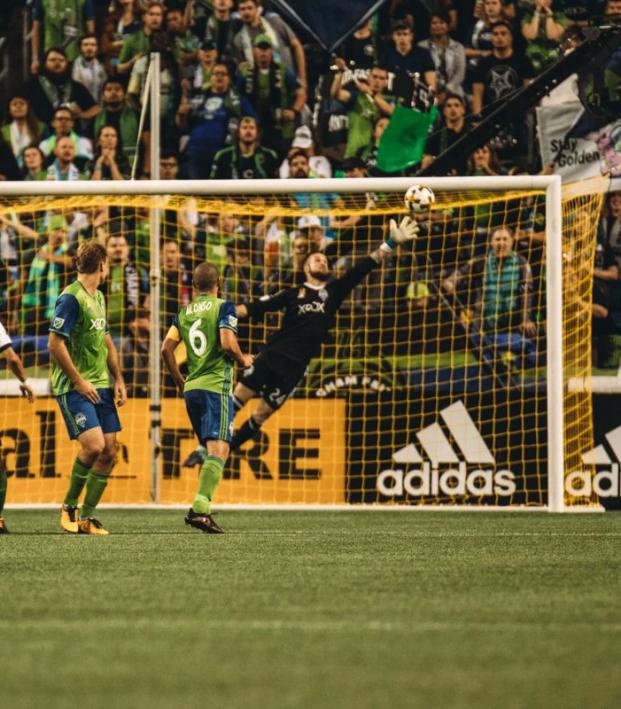 Travis Yoesting October 4, 2017
Eight teams are competing for five remaining spots as the MLS season draws to an exciting finish, unless you’re in L.A.

A thrill in sports not typically associated with soccer, the MLS playoff race is a unique feature when compared to European leagues like the English Premier League or Spain’s La Liga. But it sure does make the final weeks of the season exciting.

This year in the Western Conference, eight teams are competing for five remaining playoff spots with less than three weeks left in the regular season. With two three-way ties among the top eight teams, the race for the six playoff berths will go down to the wire, so let’s take a look. 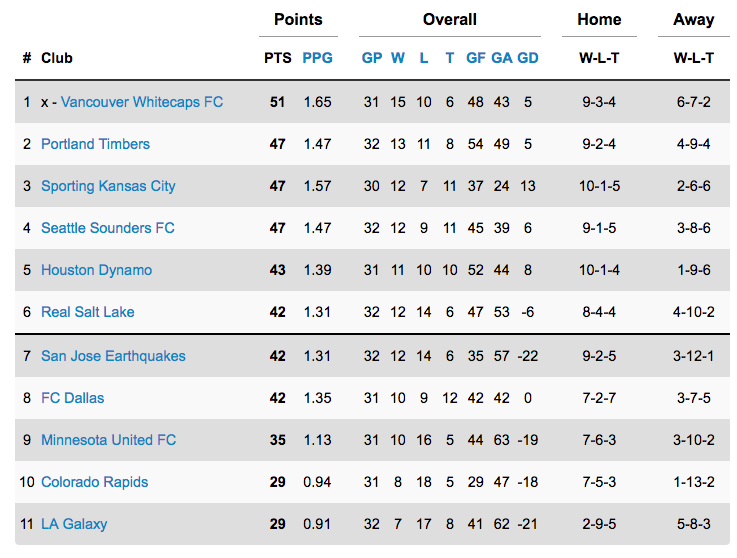 Vancouver is the lone Western Conference team to have clinched a playoff spot, but the Whitecaps can’t rest yet. Though they hold a four-point lead over second-place Portland, Sporting KC and Seattle, they could still finish as low as fifth in the standings.

Among the three teams tied at 47 points, Sporting KC is in the best position to qualify for the playoffs and improve its seeding. While most clubs have two or three matches remaining, Kansas City has four matches left in part due to its run in the U.S. Open Cup. Given Sporting’s conference-leading plus-13 goal differential, they have to be among the favorites to lock up a first-round bye, which goes to the top two teams in each conference.

Cascadia rivals Portland and Seattle will also be fighting for a bye and the right to play at home to take advantage of their impressive fan bases. The Timbers end the season hosting Vancouver in a match that could go a long way to deciding the top seeds in the West.

The three teams tied at 47 are in the best position to reach the playoffs, but with four teams between four and five points behind them, their playoff berths aren’t yet guaranteed. The Houston Dynamo have hit a rough patch since Hurricane Harvey hit their city but have a tenuous grasp on the fifth spot alone at 43 points and with three games remaining, including a makeup game against Sporting that was postponed by Harvey.

Following Houston, Real Salt Lake, San Jose and FC Dallas are all currently on 42 points. Dallas could lose a point to a lineup change fiasco, but has a game in hand over the other two. However, Real Salt Lake and San Jose both have 12 wins compared to 10 for FCD — wins are the first tiebreaker before goal differential in the result of teams finishing the season even on points.

Then there’s expansion team Minnesota United. While seven points back in ninth place after a stunning 3-2 win at Atlanta United on Tuesday, MNUFC has three matches left, giving them enough time to make an unlikely run at a playoff spot, although they’ll need plenty of help. But after handing Atlanta its first loss at Mercedes-Benz Stadium, you can't count them out. 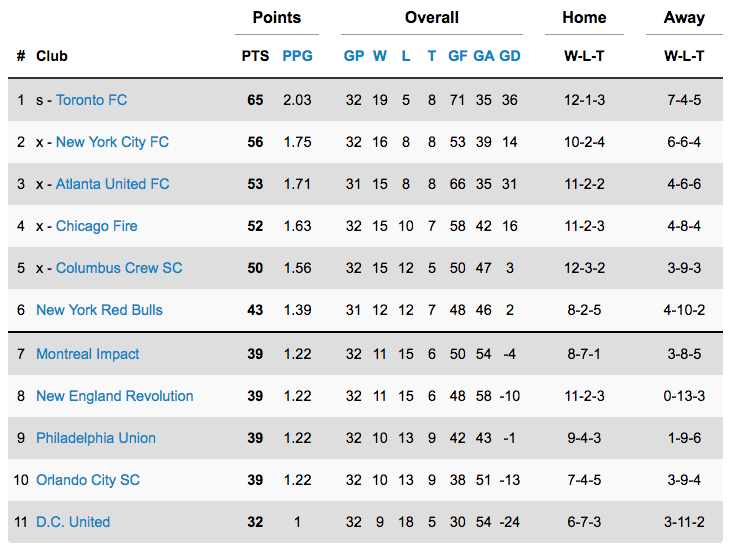 As tight as the Western Conference is, the Eastern Conference is pretty well set. While there will be some maneuvering for a first-round bye and home-field advantage, five of the six playoff teams are in place. The team in sixth, New York Red Bulls, have a four-point lead over four teams tied on 39 points with a game in hand, although Orlando City could gain two points should MLS rule in their favor on the FC Dallas situation. Montreal, New England and Philadelphia will be closely monitoring that situation given their slim playoff chances.

The biggest question remaining in the East is whether Toronto FC, which has already clinched the Supporters’ Shield, can set the record for most points in a season. Currently on 65 with two matches left, Toronto is close to the post-shootout era record of 67 points (2011 Galaxy) and the shootout era record of 68 points (1998 Galaxy).

While a few matches will inexplicably be played over the current international break, all 22 teams will play on both Oct. 15 and Oct. 22 to end the season. While the matches won’t have quite as much consequence as a title race in Europe that doesn’t have a postseason, the fact that 19 of 22 teams are still in the running for the league title will make the final couple weeks more exciting for everyone.