Half A Billion For Mbappé? Real Madrid Just Might

Connor Fleming November 13, 2019
It's only a matter of time before Mbappé realizes his dream.

Four days ago, Liverpool manager Jürgen Klopp ruled out a move for PSG’s Kylian Mbappé while lamenting the fact that no club could possibly afford the 20-year-old phenomenon. On Tuesday, Real Madrid reportedly said hold my beer and began preparing a $440 million bid for the World Cup winner.

This would nearly double the world-record fee that PSG paid Barcelona back in 2017 to prize Neymar away from the Camp Nou ($244M), and it sounds absolutely preposterous, ... but not entirely.

Real Madrid is the most valuable club in the world with a worth of $4.24 billion. The club recently signed a 10-year, $1.2 billion kit deal with adidas and is one of only three clubs — alongside Barcelona and Manchester United — to rank among the top five globally in each of matchday, broadcasting, commercial and brand value.

What’s more, the legendary Santiago Bernabéu stadium is currently in the midst of a four-year, $639 million renovation to create a “digital stadium of the future.” The venue essentially demands a lineup of galácticos.

Mbappé, of course, isn’t staying in Ligue 1 for long. He’s only 20, but he’s already won the league twice and both of the French cup competitions on offer. Sure, he hasn’t won the Champions League with PSG, but only a player like Cristiano Ronaldo — at the age of 34 and with six league titles to his name — can be allowed to solely focus on capturing Europe’s biggest prize.

It’s Mbappé’s time to be playing against the world’s best on a weekly basis — his season shouldn’t begin in earnest at the end of February.

And the ties between Mbappé and Real are perhaps football’s worst kept secret at this point. Real manager Zinedine Zidane is notoriously loyal to his own players while simultaneously refusing to discuss footballers employed by other clubs, ... at least that was the case up until last week, when Zidane made a very bold and very public flirtation with Mbappé.

“I don’t know, it’s the player who decides,” Zidane said when discussing the Mbappé rumors. “At the moment he plays for Paris Saint-Germain; we’ll see in the future if that changes. I know he always said his dream is to play for Real Madrid.”

Zidane replied: “Everyone does what they want. I’ll not say anything else. I simply said what the player said one day, that his dream would be to wear the Real Madrid jersey. I say it again and I would say it every day. I have nothing more to say about Leonardo; I can say whatever I want.”

I’m pretty sure that settles it. 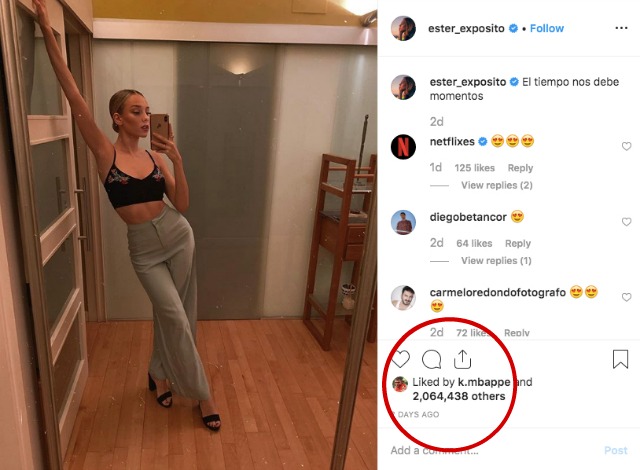 The18 can confirm that Kylian is off to Madrid after liking this photo.

The Bernabéu gets a firsthand look at Mbappé on Nov. 26 when PSG visits the Spanish capital for Champions League group play. Mbappé missed PSG’s 3-0 victory over Real at the Parc des Princes back on Sept. 18 due to a hamstring injury.

Despite hamstring, thigh and adductor problems this campaign, Mbappé has three goals and one assist in three Champions League games and five goals and three assists in seven Ligue 1 appearances.