Travis Yoesting June 23, 2021
UEFA didn’t let Munich’s Allianz Arena light up in rainbow colors, but German fans made sure the rainbow colors were front and center.

Last week, Hungary passed an anti-LGBTQ+ law outlawing any content that might “promote homosexuality” to Hungarians under the age of 18. It’s a law that has already sparked legal proceedings against it, and one that came front and center in the soccer world for Hungary’s Euro 2020 match against Germany on Wednesday in Munich.

UEFA denied Munich’s request to light up Allianz Arena in rainbow colors during the match, but by the end of the day the rainbow flags were flying high — even if it took Germany a bit longer than expected to break Hungarian hearts.

Leon Goretzka scored an 84th equalizer to help Germany to a 2-2 draw, securing second place in Group F on Wednesday. Hungary, which scored in the 11th minute, led for most of the match and would have gone through to the Round of 16 with a win (and knocked Germany out), but Marco Rossi’s side couldn’t hang on against the four-time world champs.

When the dust finally settled on a thrilling match played in a Bavarian downpour, France won the Group of Death with five points after drawing Portugal 2-2, while Germany and Portugal finished with four points apiece. Germany took second by virtue of its 4-2 head-to-head win over Portugal, but Cristiano Ronaldo’s side still reached the Round of 16 as the top third-place finisher. France now plays Switzerland while Germany takes on England; Portugal’s reward is Belgium.

Group F was just as thrilling as fans hoped when the draw first came out, but the final match of the group stage held added significance to the LGBTQ+ community because of the two opposing forces on display.

In one corner you had a country actively trying to limit the human rights of its citizens. In the other was a country trying to celebrate all humans, regardless of who they love or how they identify. Munich’s mayor Dieter Reiter asked UEFA to allow Allianz Arena to light up in rainbow colors for the match, a request UEFA denied claiming it was “political.” UEFA tried to defend its stance saying it supports the rainbow colors but opposed its use in this situation, a curious response when LGBTQ+ rights are human rights, not mere “politics.”

Usually around this point, homophobic and transphobic people will argue that politics should stay out of soccer. Or maybe they’ll point out that FIFA is hosting the World Cup in Qatar, which is even more restrictive of LGBTQ+ rights, as if whataboutism means shit or two wrongs suddenly make a right. Some might point to the Bible, but those types are awfully picky about which parts of that book they think should be adhered to in 2021. And there are those who contend that alternative views should be tolerated, which sounds like an opinion a slave owner might espouse.

None of these are legitimate arguments to support denying human rights. To be clear: Readers are free to ignore content on this site that isn’t strictly soccer, but they should at the very least acknowledge the privilege they hold as someone fortunate enough to be able to ignore human rights issues such as these.

Hungarian politicians praised UEFA’s decision on the rainbow lights using some of the aforementioned backward logic. Hungary’s squad, meanwhile, was awfully quiet about the issue. Even RB Leipzig keeper Péter Gulácsi, who has criticized Hungary Prime Minister Viktor Orbán in the past, opted against making any sort of comment on the matter.

“Thank god that in the circles of European football leadership common sense still prevails, and they did not play along with the political provocation,” Hungary’s Foreign Minister Peter Szijjarto said.

The response in Germany was the opposite, with everyone from Reiter, German health minister Jens Spahn and a few of the Germany players themselves speaking out against both Hungary’s law and UEFA’s decision to deny the rainbow colors. Manuel Neuer proudly sported a rainbow-colored captain’s armband during the match.

“This decision angered me,” Spahn told Handelsblatt newspaper on Wednesday. “Important sponsors of the Euros and of UEFA are state companies from China, Qatar and Russia. Those are authoritarian states who have severe problems with rights for women, homosexuals or different thinking people.”

Regardless, the rainbow colors were all over Munich on Wednesday.

Before the match, thousands of rainbow flags were handed out to supporters (a reported 11,000 were given out). Additionally, landmarks around Germany lit up in rainbow colors.

Before kickoff, a Germany fan raced onto the field, standing defiantly in front of Hungary’s starting 11 with a rainbow flag as the Hungary national anthem played. 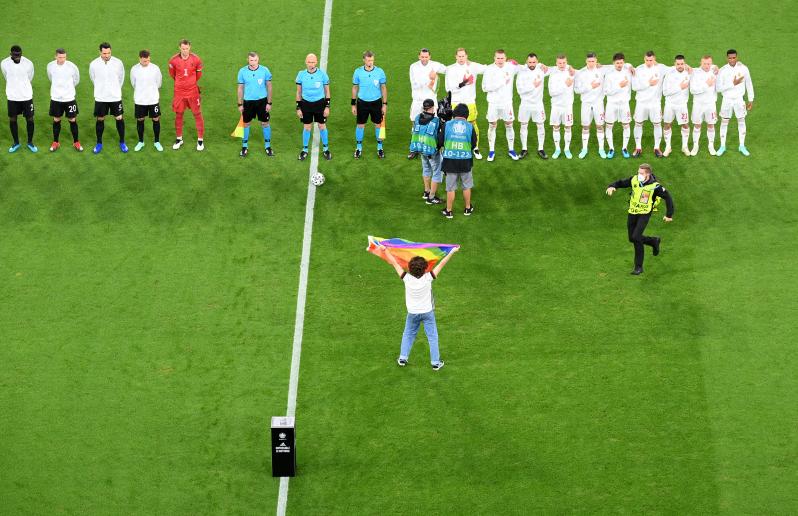 Oh wow! One spectator just ran on with a rainbow flag during the Hungarian national anthem. Loud cheers from the Germany block pic.twitter.com/EDJzdV0tbx

The fan facing down the Hungary squad was a poignant moment reminiscent of the famous Tiananmen Square Tank Man. This wasn’t quite the same as these footballers aren’t the ones making the laws or involved in the government in any way, but symbols like this can be powerful.

As the match wore on — and most rainbow flags in the stands fled the downpour — it looked like Hungary might strike back with a shocking win over Germany. Hungary, which hasn’t forgotten it was West Germany that denied its best chance at a World Cup in the 1954 final, led for more than 70 minutes of the 90-minute match. It took a late goal from Leon Goretzka to pull Die Mannschaft level and send Hungary home early.

Upon scoring the vital goal, Goretzka celebrated by making a heart out of his hands. He later confirmed the heart was to “spread love,” using a rainbow flag emoji in case anyone didn’t understand the meaning.

For fans who support human rights (LGBTQ+ rights in particular), it was a great moment. I found it to be a great moment. Normally, I root for Hungary in international soccer. Budapest is one of my favorite cities in the world, and I have a strong appreciation for the Mighty Magyars of the 1950s, who at one time dominated world football with the likes of Ferenc Puskás. But hearing the telling silence from the Hungary team about the anti-LGBTQ+ law made me root against them — or more accurately, the country’s political leaders — without remorse.

While this was just a soccer game that will change little in the grand scheme of things, it was a victory for the LGBTQ+ community, even if the match finished in a draw.

Information from Reuters was used in this report.