Travis Yoesting November 14, 2017
Alexandre Lacazette scored twice for France, which couldn’t hold on for a victory in their friendly with Germany.

Anthony Martial did some bad, bad things to the Germany defense on Tuesday in Cologne. Alexandre Lacazette scored two goals. But, because this was still Germany, the home side scored late to earn a 2-2 draw in a friendly between two World Cup favorites.

Both teams are looking to build a little cohesion in the buildup to the 2018 World Cup and while much of the match was played with a relaxed demeanor, France will be disappointed to have given up the lead with a 93rd-minute equalizer.

Martial provided the match’s brightest moment when he shimmied around the German defense with a couple dirty moves to set up Lacazette’s first goal in the 33rd minute. Lacazette may have been offside, but everyone was too enamored by Martial’s composure in the box that no one cared.

The lead lasted until the 56th minute when Mesut Ozil picked out Timo Werner with a classy through ball to put Germany on the board. 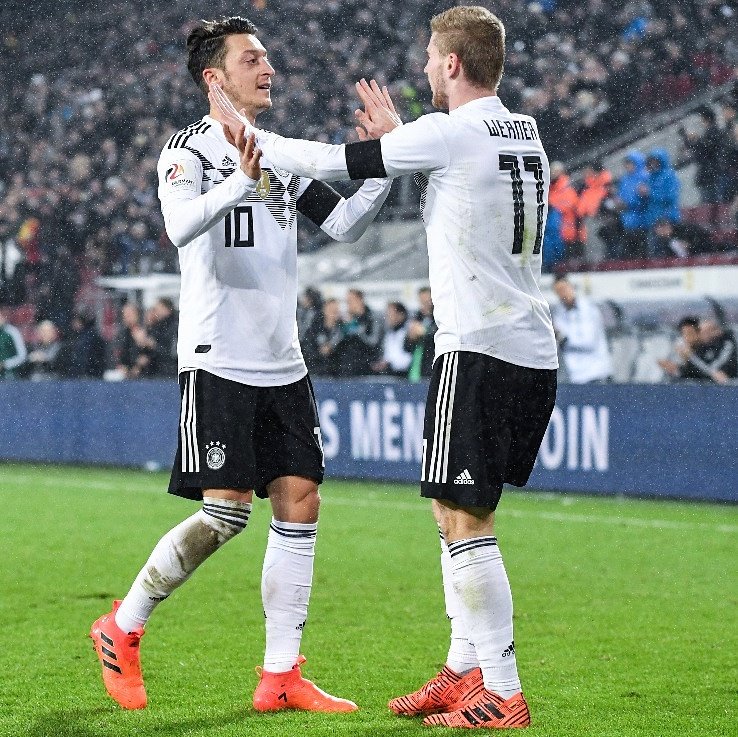 Lacazette then doubled his tally to restore the French advantage in the 71st minute. The Arsenal striker must have felt like Moses when he parted the German rearguard and was played in without any defender in sight.

Germany played with a stacked midfield with the likes of Ozil, Sami Khedira, Toni Kroos, Julian Draxler, Ilkay Gundogan and Mario Gotze all seeing playing time. The question for the top-ranked team in the world heading into 2018 is whether the forwards can score enough goals.

Werner did his part and then Lars Stindl showed he can contribute as well when he finished a brilliant move from Ozil to Gotze.

The goal ensured Germany finishes 2017 unbeaten, the first time Die Mannschaft has gone a calendar year without defeat since 1997.

France, the world’s seventh-ranked side, showed off the attacking flair with the likes of Lacazette, Martial, Kylian Mbappe and Antoine Griezmann that has made them one of the favored sides in Russia, but the inability to kill off the match is worrisome, even if it was against Germany.

But that Martial moment will make plenty of highlight reels in the lead up to the 2018 World Cup.