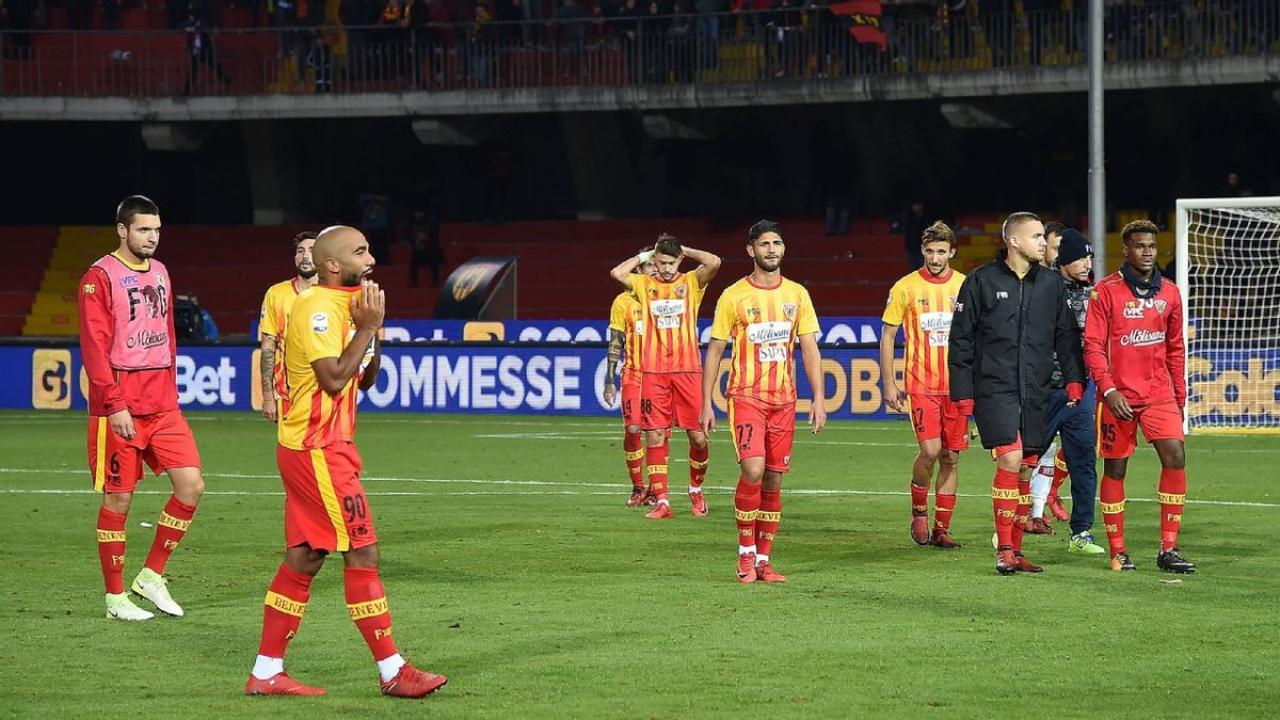 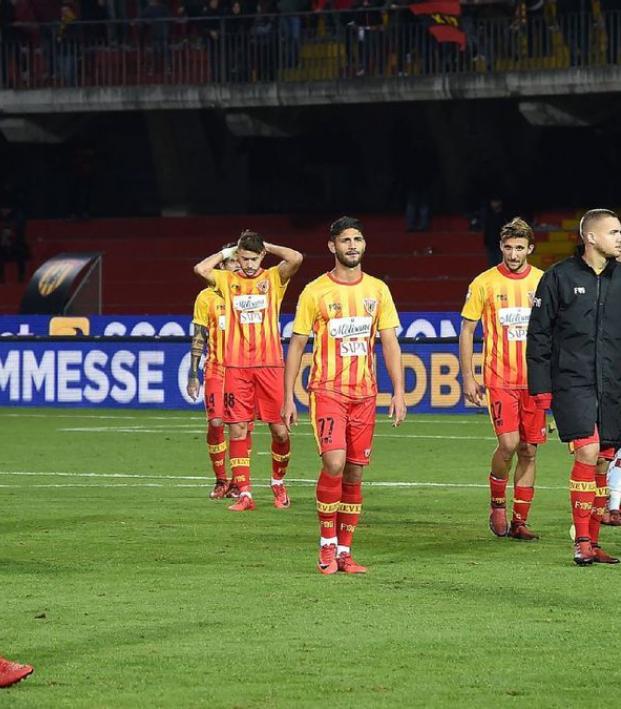 Huw Thomas November 20, 2017
After Benevento lost again, the freshly promoted side now possesses the worst start of any team in the top five leagues. Ever. But they came so close to a sweet, sweet point.

At what point do you give up?

At what point, after months of being utterly abject, do you finally snap and say to yourself, “You know what, maybe football isn’t the sport for me?” At what point — if you’re a Benevento player or fan — do you decide rugby, darts or bobsledding is actually your calling in life? Right about now, we should be approaching this point. It goes without saying: Benevento is historically, catastrophically, fantastically abject.

Benevento is a bad football team. That’s obvious. And that’s not to say that the club itself is somehow rotten or the fans are deplorable. Quite the opposite. They’re a plucky, resolute side, which seems to have been promoted a little bit too soon — the underdogs to end all underdogs. But there’s no escaping the fact: They really are quite terrible.

And this is not just a poor run of form. This is not just the work of Serie A’s standard relegation fodder. SPAL and Genoa are plowing that furrow: teams who — in most years — we’d be happy to label as bad. But Benevento is above and beyond them. They redefine the concept of a bad football team.

They’re the Guardiola’s Barca of bad football; they’re the Sacchi’s Milan of miserable performances; they’re the Invincibles of being absolutely vulnerable. A kind of perverse footballing triumph, a morbid curiosity in how not to play the game. This is the stuff of legends.

So far this season, Benevento has played thirteen games. They’ve lost all thirteen. Previously, the record for consecutive losses at the start of a season belonged to Manchester United. It doesn’t any more.

This weekend, Benevento flew past Man United and don’t look to be winning any time soon. As we’ve said, this is historic. This run will be going in the record books for all the wrong reasons.

When you write out the list of all thirteen results — LLLLLLLLLLLLL — it begins to really hit home. Thirteen Ls, all in a row, like a rural Welsh town has snuck into the Serie A table. No one has ever lost this much, this soon into a season.

Most consecutive defeats at the start of a season in the history of Europe's top-5 leagues:

Fair to say that Benevento are not good enough for Serie A football pic.twitter.com/w58NG3DlKb

But by far the most interesting thing about Benevento — apart from all the witches and the folklore surrounding the town — is how they’ve managed to do this. They’re not just bad. They’re not just getting battered every week in exactly the same style. There’s some variety to this team.

Sure, there’s been the massive losses, such as against Napoli, where goal after goal has flown into their net. But then there’s the game against Juventus, the perennial big bad in Italian football, the ruling champions. Benevento actually managed to go 1-0 up in that game. Sure, they went on to lose. But they did it in an interesting manner.

There’s a tiny, almost imperceptible window of hope that opens up during games like this, only to be slammed shut by the crushing inevitability of Benevento’s terrible season. It’s not just the fact that they lose, it’s how they lose which makes them so interesting.

This weekend was perhaps the best example of this. The cruelest of all losses. The moment when people should start to wonder whether Benevento really have been cursed, whether they got on the wrong side of a particularly vindictive god.

Because they very nearly won their first point. A draw doesn’t sound like much. It’s just one point. A single, solitary point. It won’t save them from relegation. It’s not nearly as interesting as a win. But a point is important to Benevento, in the same way that the man who has crawled across the desert without a drink will be happy with a drop of water. It’s something.

They played against Sassuolo. A few years ago, people thought Sassuolo would be contenders for relegation. A team promoted perhaps too soon, a provincial town without much in the way of modern footballing infrastructure. A team doomed to fight and scrap and then get relegated. But they stayed up. The manager that turned them into a Serie A mainstay is now at Roma. They’re now a proper side, who’ve played in the Europa League, no less.

If Sassuolo were the model of how to deal with promotion in the right way, then Benevento are a warning tale. A morality play teaching teams exactly how not to deal with the top flight. It’s somewhat fitting, then, that Benevento came so close to a draw in this particular fixture. 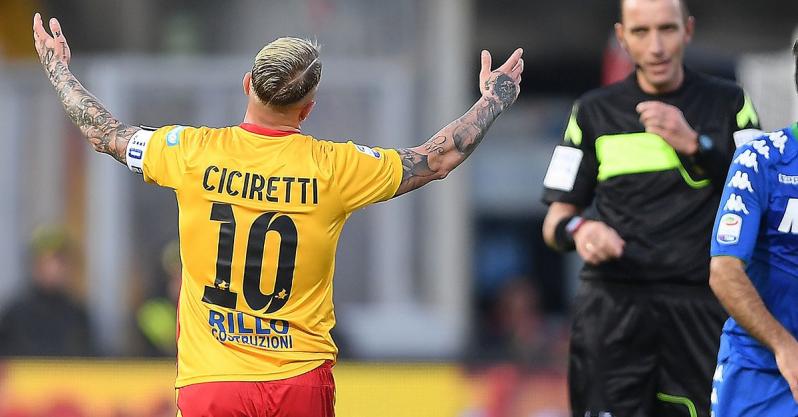 It wasn’t a great match. A nothing first half gave way to the second and, fifteen minutes later, Alessandro Matri scored the opener for Sassuolo, reminding Serie A watchers that he’s still alive. From there, it seemed as though this was another dismal result for Benevento. But, barely 10 minutes later, they hit back. Samuel Armenteros scored and drew the sides level.

Good things don’t happen to Benevento, however. Barely two minutes after they’d equalized, Gaetano Letizia was shown a second yellow card and sent from the field. After a brief moment of hope, the doom and gloom set back in.

Sassuolo struggled, however. They couldn’t quite breakdown the Benevento defense. Even a man down, the besieged side fought and fought. They made it to 70 minutes, then 80, then 90. Slowly, people started to believe. They might actually do it. They might actually win a point.

Then the referee blew his whistle. He awarded the inevitable penalty. The clock had ticked past 90 minutes; we were well into stoppage time. Fate had conspired against brave Benevento once again. Few could watch as Domenico Berardi stepped up to take the spot kick.

He hit the bar. Missed. The scores stayed level. Today, god was smiling on Benevento, offering a moment’s relief amid a season of misery. People could barely believe it. Twitter exploded, commentators laughed and joked.

But life is cruel. With the adrenaline still pumping through the bodies, with people beginning to entertain the idea of a Benevento side who didn’t lose every single game, things were happening on the pitch. In the middle of the delirious confusion, Federico Peluso won a header in the box. It crossed the line in almost the very last second. The game was over. Benevento lost again.

There’s an old football saying coined by Nick Hornby. It’s the hope that kills you. In that moment, between the penalty and the goal, every single Serie A fan was rooting for Benevento, for them to take that sweet, sweet point and finally banish their demons. But it was not to be. As delighted as they were, Peluso’s winning header brought them crashing back down to earth.

Now, Benevento is a record holder. Officially, the worst-ever start to a season in Europe’s top five leagues. They were promoted too soon, like Icarus flying too close to the sun. They dared to believe this weekend and it all fell apart. It’s almost like they were punished for coming so close. That is the story of Benevento. This is history in the making: Benevento is fantastically, amazingly, wonderfully bad.