Travis Yoesting May 3, 2018
The German midfielder has impressed in a new role with the Chicago Fire.

When Bastian Schweinsteiger first burst onto the world scene at the 2006 World Cup, the precocious 21-year-old was a winger with a bag of tricks. By 2014, when he helped Germany hoist the World Cup trophy, he was a veteran defensive midfielder, a calm and composed presence.

But Bastian Schweinsteiger in 2018 with the Chicago Fire has taken on an entirely new role: sweeper.

Fire coach Veljko Paunovic has moved the aging but gifted player from the heart of his team to the heart of his defense, lining the German up at the middle of a three-man defense in a 3-5-2. 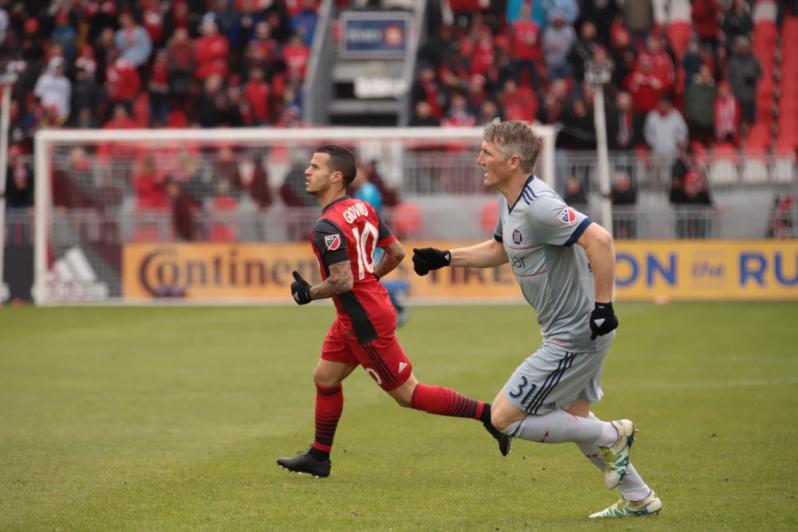 Paunovic made the switch after Chicago opened the season with two losses and a draw. The move paid immediate dividends in a 1-0 victory over Columbus, the club’s first clean sheet of the season. Schweinsteiger was promptly named to MLS’ team of the week as a defender. MLS contributor Bobby Warshaw broke down the tactics of the shift in detail here.

But the move wasn’t a one-off. Paunovic has continued to select Schweinsteiger as a center back/sweeper. Since the change, the Fire have two wins, a draw and a 1-0 loss to Zlatan.

So what do we make of Bastian Schweinsteiger, the sweeper? So far so good.

What has always made Schweinsteiger a great player is his vision, feel for the game and the all-important but always-hard-to-quantify Soccer IQ. Even as a winger he was adept at cutting inside or taking advantage of space out wide when needed. As a central midfielder, he linked defense to attack masterfully and knew where to place himself defensively for interceptions. Now as a defender, he can put those assets to use while seeing the whole game in front of him.

What’s more, Schweinsteiger has been given freedom in his role as a sweeper, often popping up in midfield to help out in possession. At times, if Paunovic needs his team to control the ball, he can push Schweinsteiger back into his normal midfield role, giving the squad more versatility without the need for substitutions.

So far, in four matches at center back, Schweinsteiger has scored a goal and added an assist, so he’s still able to help out offensively. (He has two assists in two matches starting in midfield.)

According to whoscored.com, Schweinsteiger has a 7.58 rating while playing defense, a decent improvement on his 7.13 rating he had in 2017, though admittedly below his 7.82 in midfield this season.

Just this past week he was named to WhoScored’s MLS Team of the Week for his 8.4 rating at center back against Toronto in a 2-2 draw.

Bastian Schweinsteiger has impressed at centre-back for the @ChicagoFire this season and features in our MLS team of the week after his man of the match display against Toronto FChttps://t.co/20XHb4x0Rx pic.twitter.com/ekJOZxM3aR

The move from midfield to sweeper isn’t new for German players. In fact, German great Franz Beckenbauer is often credited with inventing the role of the libero, or a sweeper who imposes himself into the match on offense when necessary.

But it’s a move that could allow the Fire to get the most out of Bastian Schweinsteiger, one of the biggest names in Major League Soccer.

Next up for Schweinsteiger and the Fire? Trying to slow down Miguel Almiron and Atlanta United on Saturday.