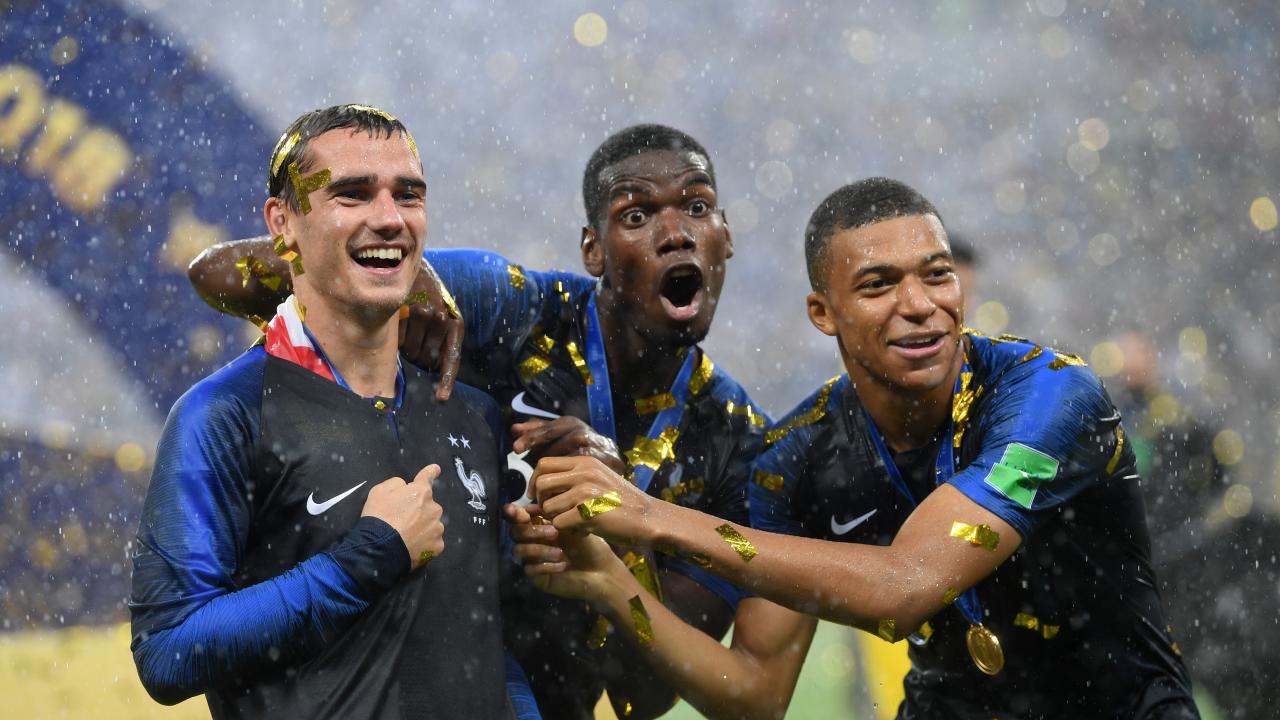 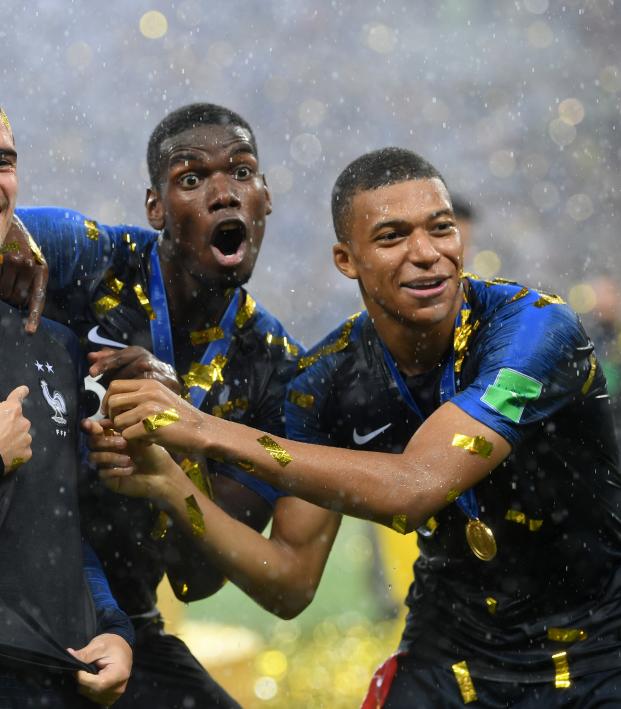 While members of the French national team were dancing in the rain, kissing their new trophy and celebrating a well-deserved FIFA World Cup victory in Moscow on July 15, waiting for them back in the locker room was a unique surprise.

The world watched as Croatia president Kolinda Grabar-Kitarovic soaked in the moment, Russian president Vladimir Putin refused to allow himself to get wet and France reveled in its second world championship.

What the world didn’t see was a reward waiting for each individual player, a few special cold ones taking a bath of their own.

The 2018 FIFA World Cup winners are all back with their respective club teams now. Many are competing against their French teammates in league play. But in addition to the indelible celebrations on the pitch at Luzhniki Stadium one month ago, they’ll forever be linked by a one-of-a-kind experience available only to them once they returned to the locker room after that misty evening in Moscow.

Alongside the cliché champagne bottles, resting in baths of ice were individualized bottles of Budweiser beer. Each player had his own personalized bottle, his name digitally printed onto the glassware itself with a technique that would have been impossible the last time France won the FIFA World Cup in 1998.

The18 has exclusive photos of what the locker room looked like as the full-time whistle blew on the 2018 World Cup final. 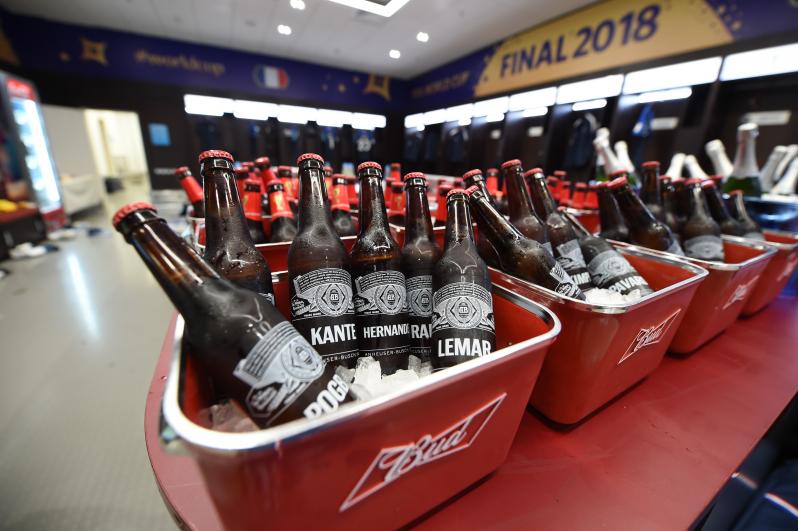 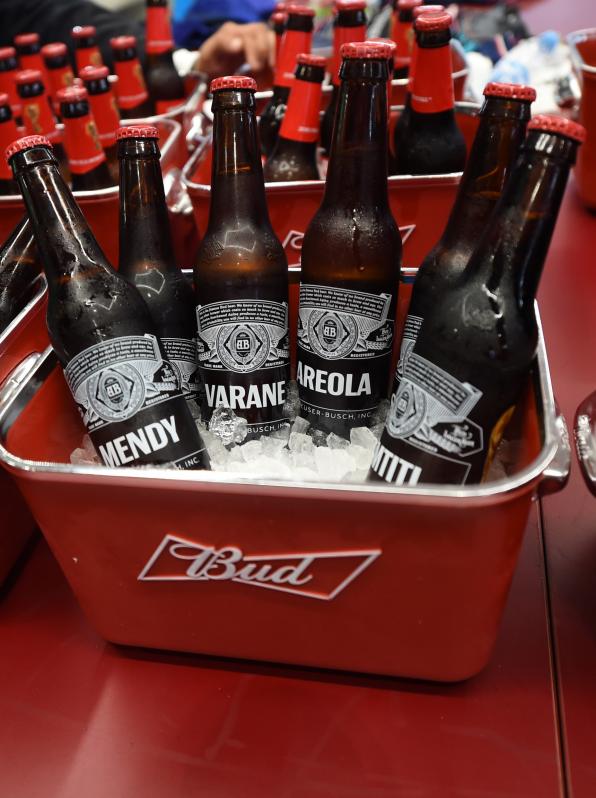 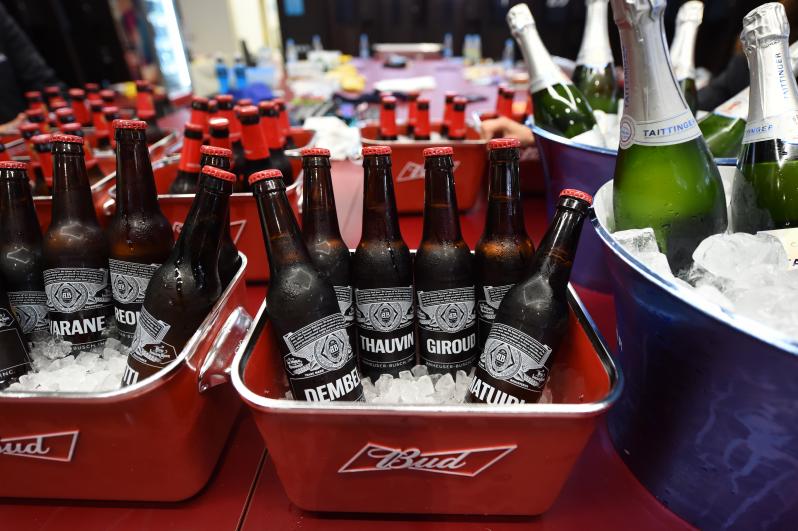 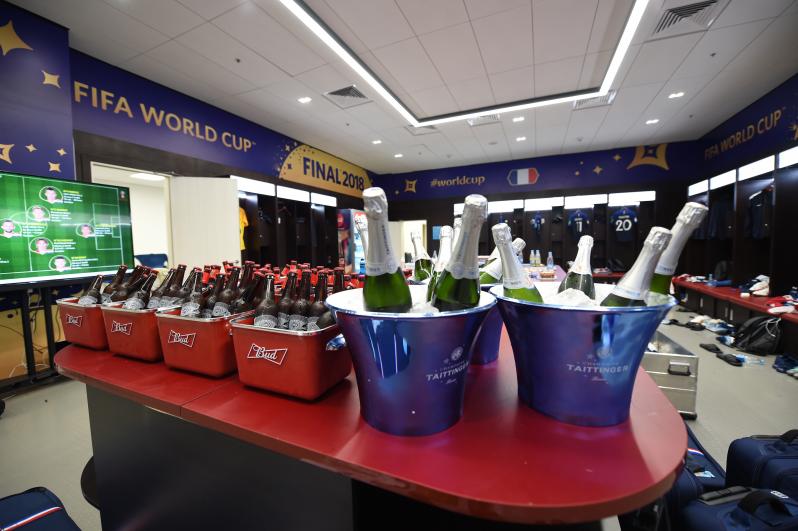 The digitally printed winners’ bottles were the culmination of the most ambitious marketing campaign ever embarked upon by Anheuser-Busch InBev (ABI), the world’s largest producer of beer. With the help of ABI’s Global Innovation and Technology Center (GITEC), Budweiser lit up the World Cup with cups that would illuminate with the growing roar of the crowd.

The behind-the-scenes story on the light up cups was just the beginning for Budweiser, which sought to amplify the euphoria of the world’s greatest sporting event. 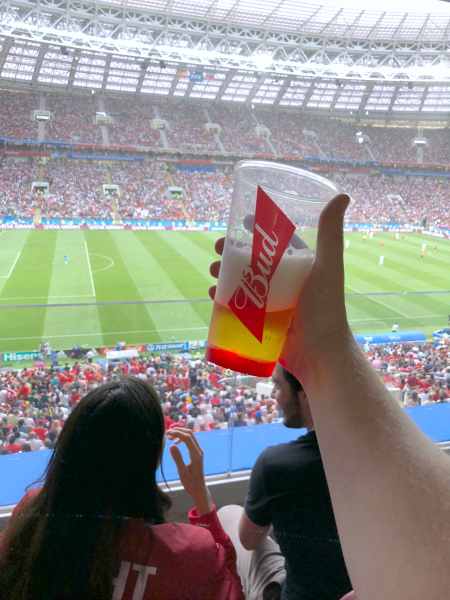 The printing technology driving the Bud campaign came together thanks to the collaboration between ABI’s Global Innovation and Technology Center (GITEC) and Dekron (a Krones subsidiary), which developed the first industrial, high-performance direct printing production line for Digital Decoration of glass bottles.

The result, after months of work, was the surprise waiting for the French national team back in the locker room after defeating Croatia 4-2 in the World Cup final. 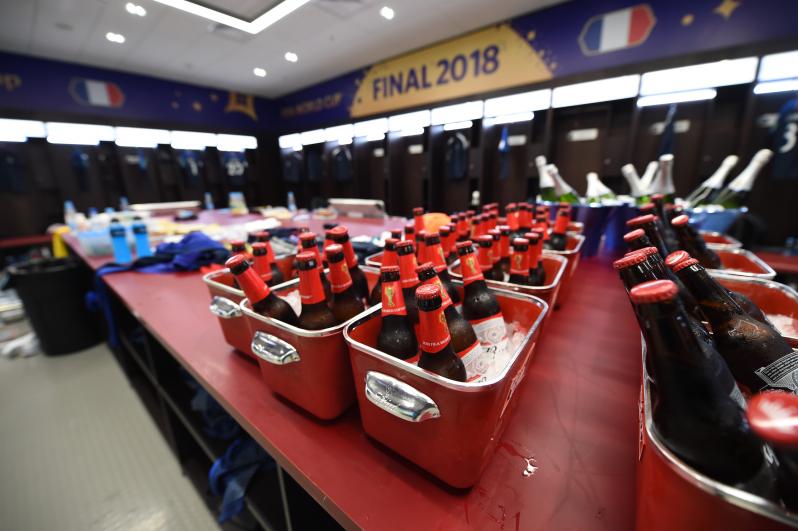 The only way for Budweiser to pull off this feat was with a printing technology that allowed each bottle to receive a different design, printing directly onto the bottle without a wrapper and without the need to waste bottles as the printer aligned itself as is often the case with traditional print jobs of this variety. These bottles represent a glimpse into the future of packaging.

“The long term goal will be that we can have interactive packaging where every bottle can be different, not just aesthetically but functionally as well,” Perkins added.

The18 received exclusive access to a few of these specially printed bottles, though admittedly we had to fish them out of the recycling thanks to an overzealous cleaner. 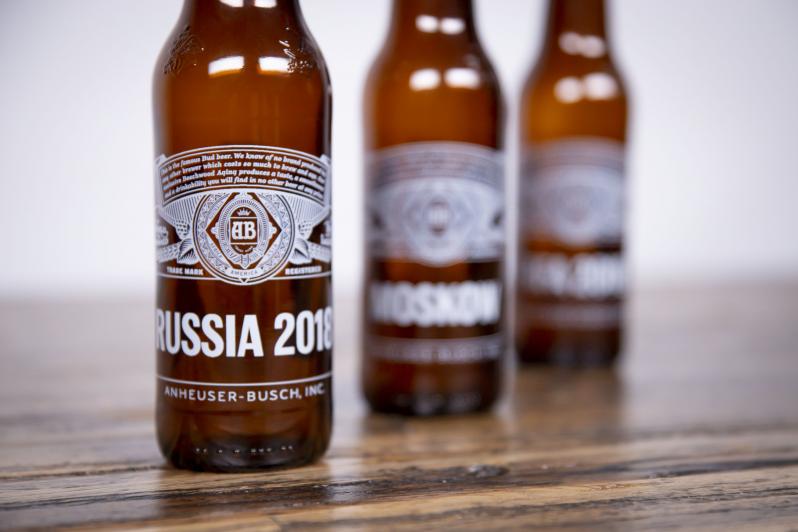 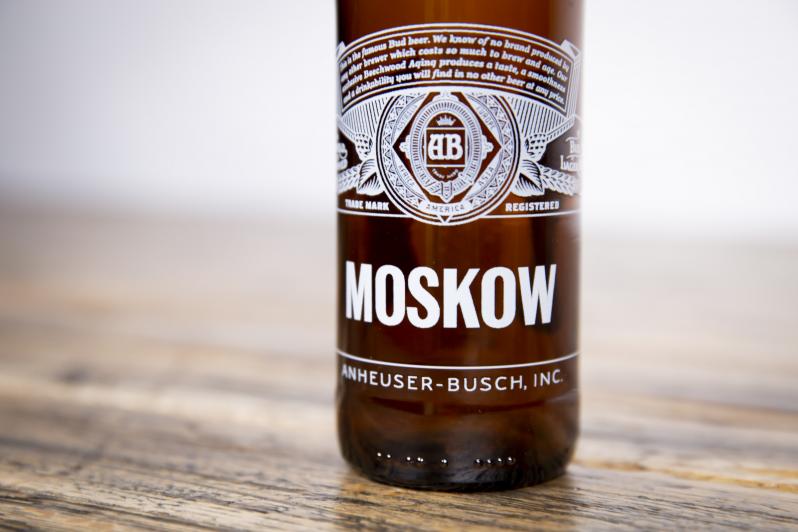 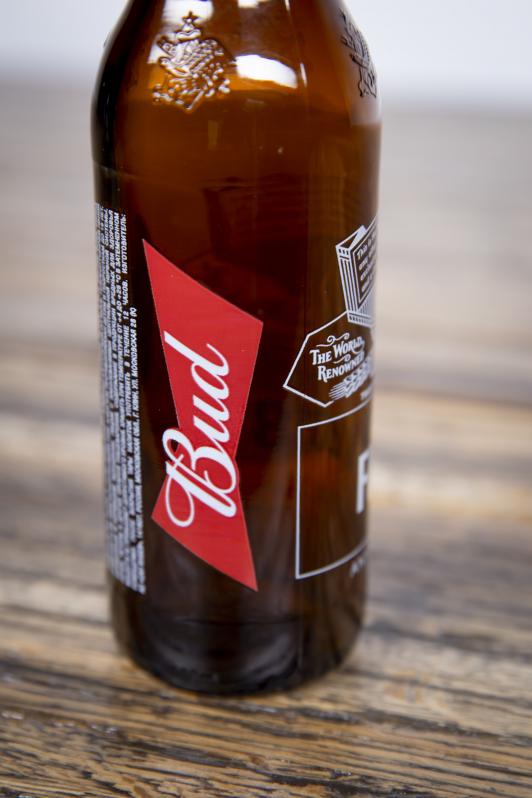 The process wasn't easy for Budweiser.

ABI had to print the bottles on short notice and fill them afterword to avoid UV damage to the beer during printing. Without knowing in advance which team would win the World Cup (because not everyone can correctly pick the winner before the tournament), Budweiser had to produce extra bottles for other teams. Indeed, when Croatia found out about the bottles, they asked to be given the unique reward win or lose. 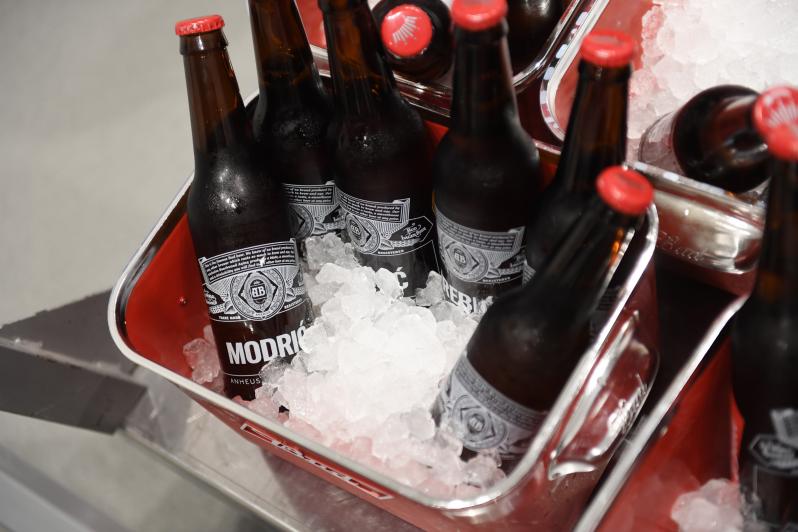 The result is a beer company connecting itself to one of the greatest moments in sports — the celebration of reaching the pinnacle of soccer — all thanks to the ingenuity of GITEC and ABI.

“We’re very lucky to have GITEC,” Perkins said. “It’s really fun to have them as partners working with us to push ourselves so we’re on the cutting edge of technology. Besides, the celebratory moment is such a great place for a beer. I can’t think of a better way to toast a win.”